LM317-based adj power supply output takes a while to stablize

However I've noticed the output can take several seconds (on the order of 10 or so) to "settle down" after turning the trimmer to desired output voltage. What happens is if I set it to 5.000V (as an example), my DMM will show the output slowly tick down in 1mV increments or so until the voltage finally settles; sometimes as much as 100mV lower than what I initially set.

Doesn't seem to matter if I turn the trimmer fast or slow. Once I let go, my DMM will show the voltage slowly "tick down" until it finally stabilizes. The same issue occurs with or without load. To provide stable load for testing (100mA or so) I'm using a constant current dummy load similar to the EEVblog one. Also, originally I didn't have the 10uF adj cap, but adding it doesn't seem to make a difference.

Any idea why this is happening or is this just normal? Seems like I have enough smoothing capacitance so I don't think it's a ripple issue. Could it be too much capacitance on the output? I've seen other people demo their LM317 circuits on youtube and their DMM doesn't seem to "tick down" after setting the output voltage like mine does.

Maybe my DMMs are just too accurate, heh. =)

EDIT: I tried replacing the 'dummy load' with a simple 1k resistor (also tried a 100-ohm). Didn't really seem to make a difference. Also, seems like after I set the voltage my meter 'ticks down' pretty fast at first then slower and slower. "Feels" almost logarithmic:

I just remembered my agilent meter does data logging (duh). Here's graph of ~90 data points showing the voltage drop (after setting to around 5.25V or so) over ~90 seconds: 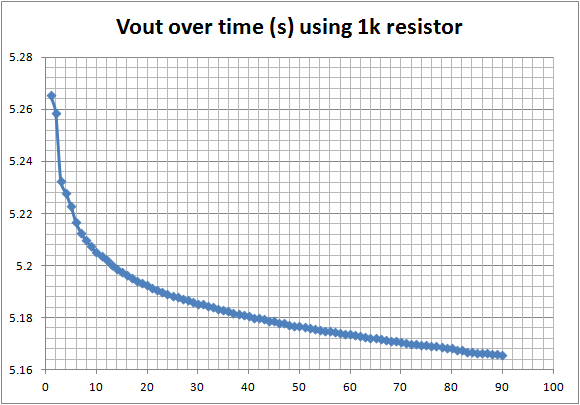 Here's another over 5 minutes (I was trying to dial-in 15V): 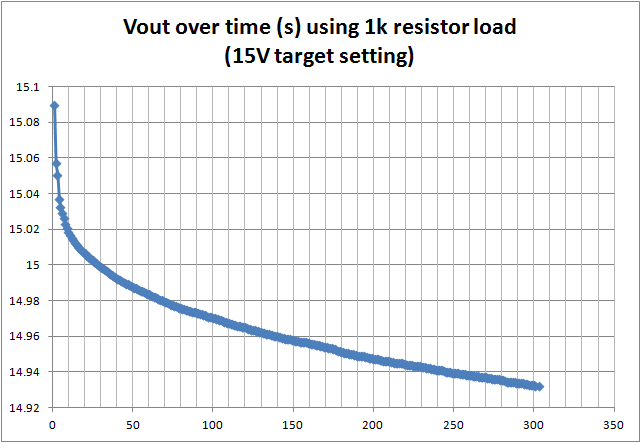 UPDATE: Replaced the 5K pot (which was a crappy single-turn rated at 50mW) with a 5K 10-turn precision pot (rated at 2W). Now I can crank it up to, say 5V or 12V or whatever and my DMM shows a stable reading right away.

I think that you are dissipating too much power into the potentiometer. My calculation works out to 161mW when the total resistance is used. If it is a low power 200mW version, it might be too much. Swap R5 for a 1K or 910 ohm and do the experiment with the 5V again and see how it varies.

Given the information provided by your data logger's diagrams, I am fairly sure you are looking at thermal drift. The time constant of your drift is in the range of some 10 seconds to some minutes, which is quite common for thermal settling of small-ish parts. You say that in your first tests, your load takes something like 0.1 A, and the difference between input and output is approximately 20 V - 5 V = 15 V. This means your LM317 is dissipating apporximately 1.5 W - enough to give it a noticeable temperature rise, depending on the heatsink. When you set the output to a higher voltage, and assuming the current stays the same, you reduce the power dissipation (heating action), which would explain why the drift takes longer with a higher output voltage. (Edit: Slightly different numbers would apply for your experiments with a 1k load resistor, of course.)

If the LM317's internal reference drifts to a slightly lower voltage with rising temperature, the output will drift as well. If you start at 5.27 V at room temperature and get 0.1 V less with a hot LM317, this is something like a drift of 2 %. Not exactly good, but also not unheard of for a standard integrated voltage regulator...

You can test this theory by using cooling spray (or just by blowing cold air along the part) or a hot air gun (or a soldering iron) and monitoring the regulated output voltage with your precision DMM. Your particular regulator seems to have a negative temperature coefficient, so cooling it should make the output voltage higher and heating it should make it lower.

TI's LM317 data sheet looks like their version of the regulator IC even has a negative tempco, so it should do what your IC does. Other manufacturers' parts may have a positive tempco, however. Cf. top left of pages 4 and 5.

As in all such circumstances, even a very low spec oscilloscope is of great value. An oscilloscope extends your eye-brain capabilities into the time domain for periods much shorter than it is otherise capable of :-). They are an essential tool in all serious electronic development situations. You can probably find an old tired one for less than the cost of the parts in this supply and it will provide you with insights otherwise impossible to obtain.

Oscillation?: This sort of result is often due to oscillation BUT your circuit looks reasonably OK. Some regulators require output caps within a Goldilocks range (not too high and not too low) AND ESR also with a range, but LM317 is not as finnicky, but check datasheet to be certain that caps used do meet range requirement.s Caps mounted near regulator is a very good idea.

Load/Supply interaction?: Try with a sinple resistor load to start say 100 ohms to 1000 ohms. Could be an interaction between load and supply.

With circuits of this sort (which are an excellent idea in principle and often excellent in practice) you are at the mercy of the algorithm implemented inside the load controller. If it needs to iterate the loading to meet the constant current spec this may cause unexpected results, and potentially it too may oscillate as it seeks the desired operating point. The LM317 SHOULD be voltage stable under varying load within its load range but there's no certainty that there will be no interaction. 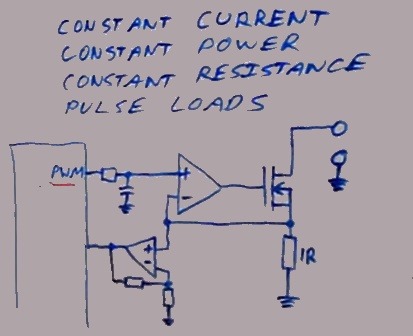 My firts guess was that you have an abnormally large value for C7, but you say that the effect also occurs without C7, so that can be ruled out.

A you sure you didn't set your DMM to some weird setting, like average-peak or AC? Can you measure the output with some other instrument (oscillsocope, old-fashioned analog multimeter, or even a LED+resistor to get a rough idea)?

Not the answer you're looking for? Browse other questions tagged power-supply lm317 or ask your own question.

1
Keeping the output of a heated LM317 constant