What is the problem with my LED panel switching circuit? 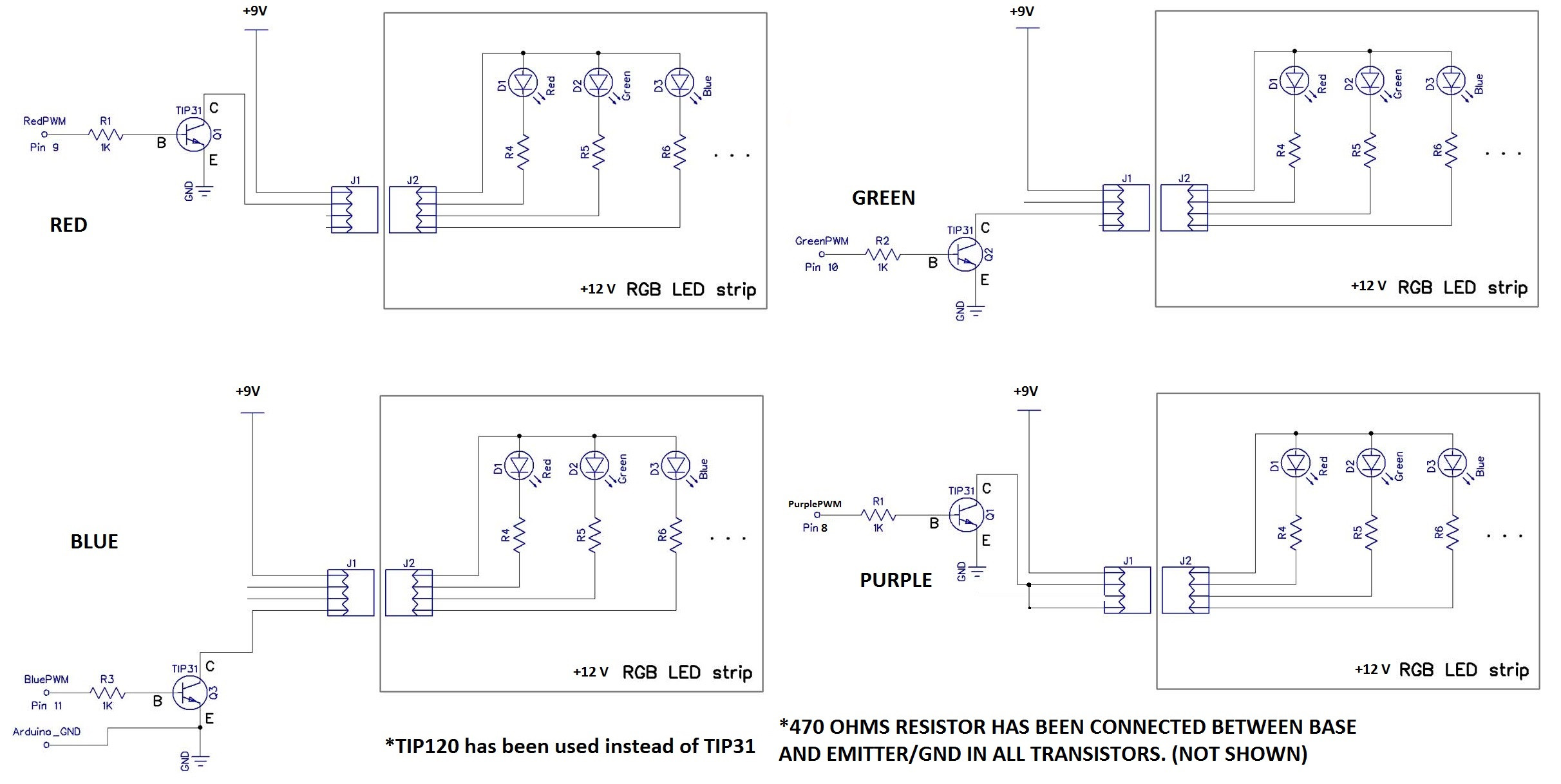 I have soldered this circuit on PCB. When I switch Q1 via MCU pin-1, I see LED glowing on Q3 (not too bright though). What could be the reason for this? Even though, MCU pin 2 is pulled down to GND! It works fine on the solderless breadboard but not on the PCB. 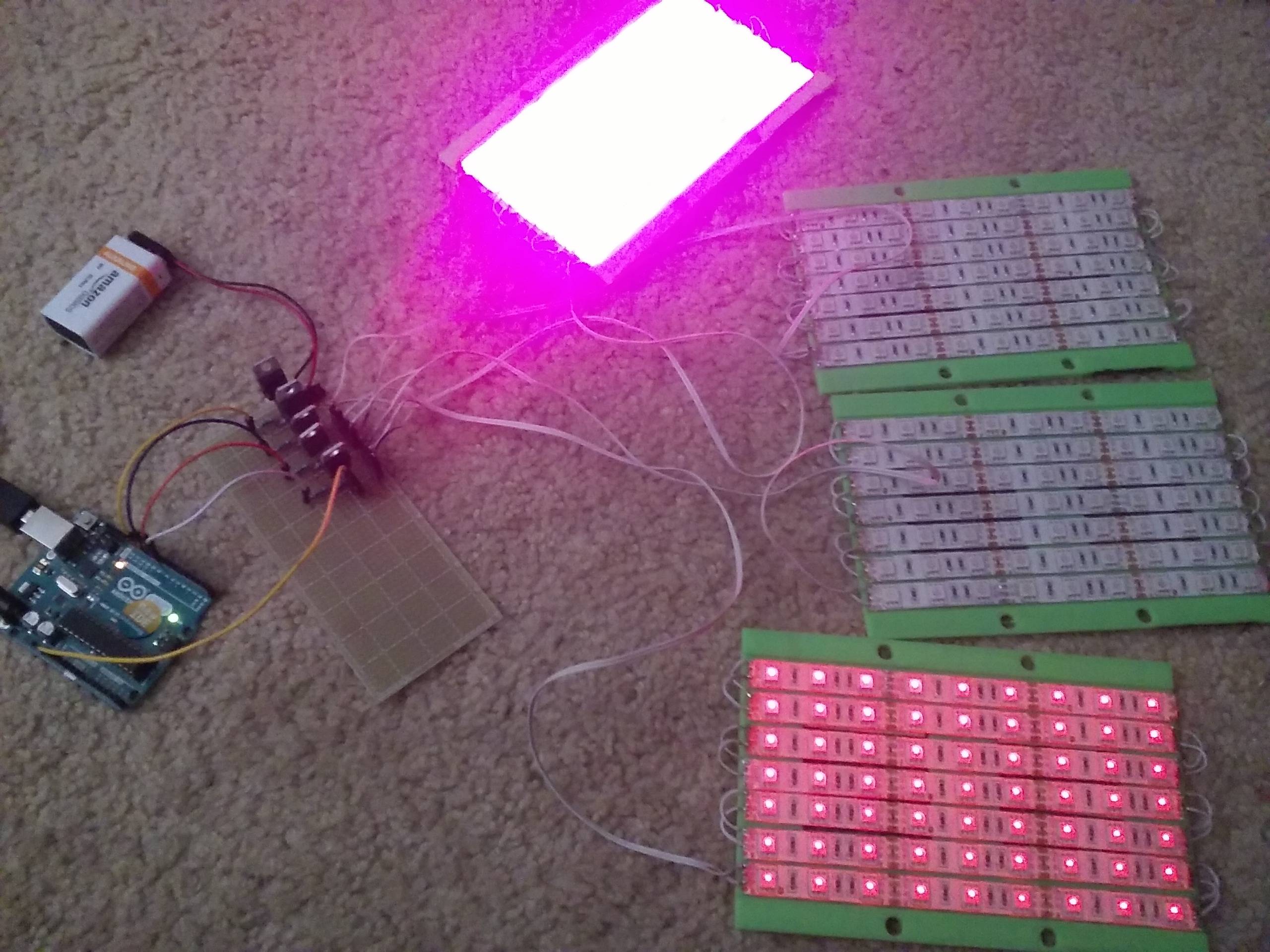 The problem was very simple. My PCB circuit had some remnant soldering flux on it which created some conductivity. I cleaned it properly with hair dryer and it worked completely fine. Thank you all for your answers.

There must be an unwanted connection between the Q1 circuit and the Q2 circuit. If you made the pcb yourself make sure it is clean. Even an unexpected high resistance can make the led glow light.

The TIP122 is a Darlington. I don't know what you are driving it with. But if it is a \$5\:\textrm{V}\$ Arduino or anything with \$3.3\:\textrm{V}\$, then you are terrorizing the Darlington with milliamps at its base!

You also are placing your strings of LEDs directly in parallel. This isn't exactly good, either. One of the pairs is likely to hog more current than the rest.

Finally, I don't know what kind of LEDs you have. But even if they are high efficiency reds, you still are only going to provide (probably) less than a milliamp through them. That \$2.2\:\textrm{k}\Omega\$ resistor is pretty limiting here. Even if that poor Darlington is able to sink \$2\:\textrm{mA}\$ (and that's not even on the spec sheet, it is so low), that's still divided into four chains of LEDs you can only hope will get the current shared among them. If equally lit, \$500\:\mu\textrm{A}\$ each. If not, perhaps more in one pair and less in the others.

Darlingtons are very sensitive to base currents. I'm not surprised that you are experiencing odd behaviors, given the lack of design.

The TIP122 collector is designed for \$\ge 100\:\textrm{mA}\$. Assuming you really are getting bright results when ON (and I'm still having a hard time with that), then try adding a \$330\:\Omega\$ resistor (or up to \$680\:\Omega\$ resistor, if that smaller value dims the LEDs too much) from the TIP122 base to ground. Do that for both TIP122 Darlingtons. Just for starters. See if that helps any. That should cut the current down to something marginally reasonable and it should provide a path for any reverse biased leakage currents, as well. I'm kind of curious how that works out.

If it does work, then I think you really need to get a decent design worked out. Write up the exact details of what you want to achieve and what you are using. This means: (1) what is driving the transistor switch; and, (2) what voltage output represents ON (and OFF, too); and, (3) what kind of LEDs are you using, what voltage do they drop when ON, and what current do they require; and, (4) what voltage rails do you have handy?

You need a resistor in each series string of LEDs in order to limit the current in each string to the required value, as shown below.

You're starting with a 9 volt supply, and two LEDs in series drop 4 volts, so the ballast resistor has to drop the difference between the supply and the Led drop, which is 5 volts.

270 ohms is a standard E24 value and should easily give you good brightness from the LEDs. 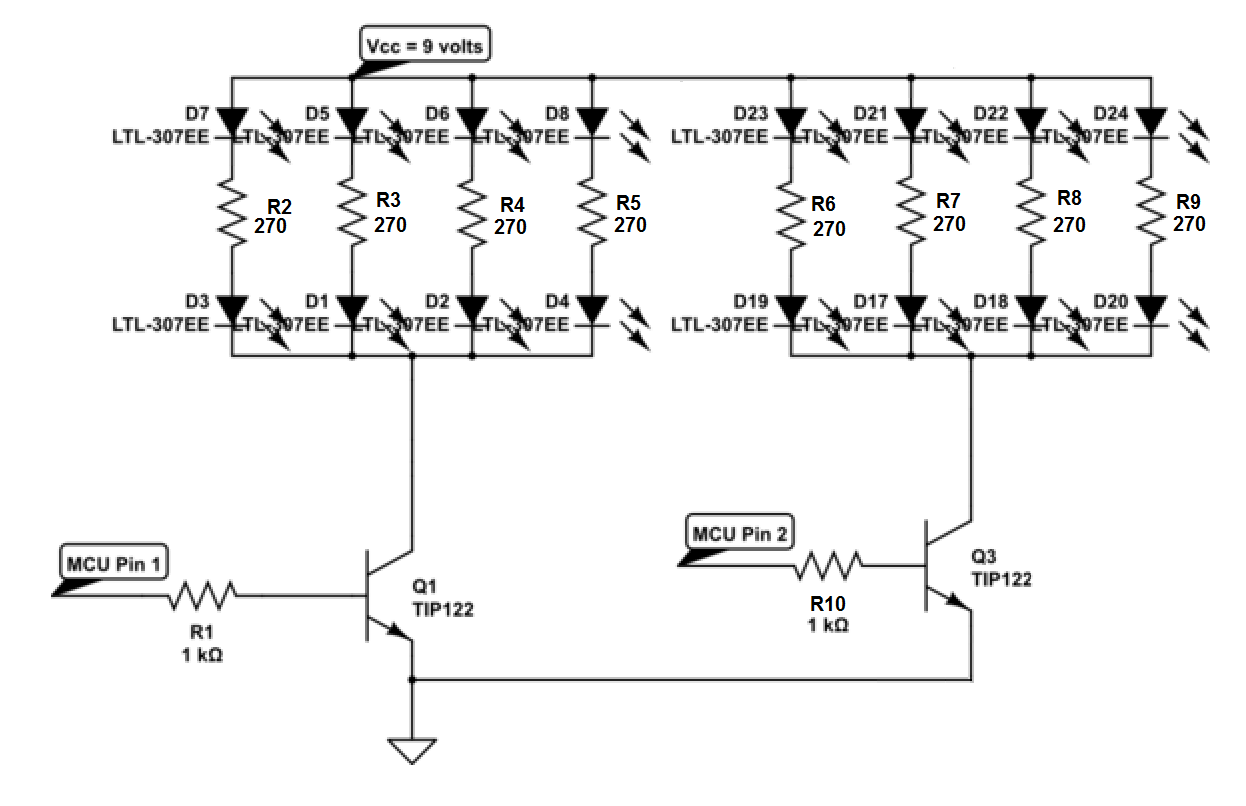 Not the answer you're looking for? Browse other questions tagged transistors circuit-analysis switching led-matrix or ask your own question.

0
8x8 LED Matrix with MAX7219 - Control with software SPI
1
What is the problem with my switching circuit?
0
Getting partial flow; downstream from transistor doesn't seem to be working
0
MOC3021 optocoupler not working ( or not working , a bit confused )
3
P channel MOSFET switching problem
1
Having trouble with determining why my XNOR transistor circuit is not behaving
5
Why doesn't the fan work when the LED is connected in series with it?
0
Mechanical relay circuit schematic and PCB. What is wrong here?