This is from my textbook talking about the advantages of a common gate amplifier. The author says that the common-gate stage is usually superior to that of the common-source stage for two reasons.

However, what makes me confused is about the second reason. The low input impedance is only an advantage when the input source is a current signal.

Do you agree with this? 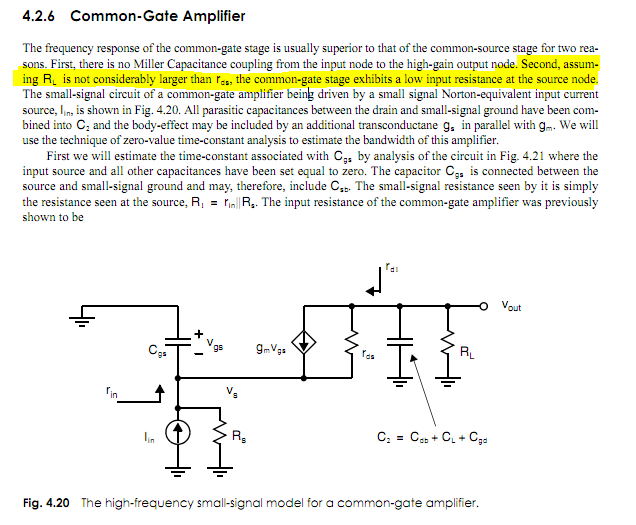 Do you agree with this?

No, the input impedance is not zero and can easily be made (say) 100 ohms or 200 ohms by including a series resistor.

The main advantage of common-base (or common-gate) is that the internal miller capacitance between drain and gate (or collector-base for a BJT) has very little effect at high frequencies.

Normally for a common source or emitter, the miller cap between drain (collector) and gate (base) significantly truncates high frequency gain unless you are driving the gate (or base) with a really hard low impedance signal. Yes you have to do that for a common source (base) but the problem isn't as bad at HF.

A common source amplifier by itself works by converting the input voltage into a current (the drain current) using the MOSFET's transconductance \$g_{\text{m}}\$. The load resistor \$R_{\text{L}}\$ then converts the current back into a voltage which is taken as the output. Hence the voltage gain is approximately \$-g_{\text{m}}R_{\text{L}}\$. Unfortunately, the high voltage gain from gate to drain results in a significant Miller effect that reduces the bandwidth considerably.

Not the answer you're looking for? Browse other questions tagged mosfet circuit-analysis integrated-circuit circuit-design or ask your own question.