I am trying to design an LC input filter with the following requirements:

-The output of the filter will be connected to a full bridge converter (with output transformer for isolation with the load). I want the converter to be voltage fed, so this is why I need the capacitor.

The topology is shown in the attached figure. Because of the full bridge, I know that the output current of the filter will be some kind of square wave, so a lot of higher order harmonics compared to the rather flat DC current that I want to draw from the solar panel.

I managed to determine the value of L and C via simulation but I would like to under build this more mathematically. So I am looking for the transfer function I_out/I_in. It's easy to find if the full bridge is replaced with an impedance, because than you can use a current divider. But I cannot find it in case of a complex switching network, such as the full bridge. Any help or clues are appreciated. 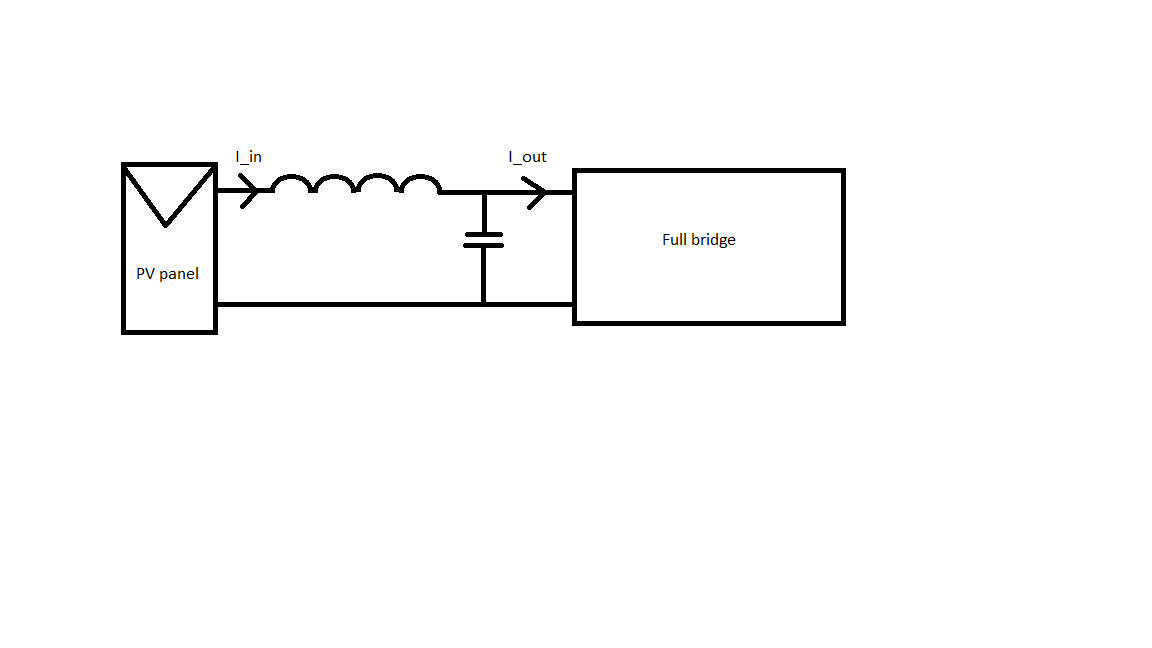 If the duty cycle of the converter is (say) 50% and the average capacitor voltage remains at 10 volts then, the current from the solar cell must be 5 A. A higher duty cycle means the panel supplies a higher average current.

So, the real dv/dt reduces to 0.05 volts per micro second.

Next, consider that the converter switches "on" for 10 us and "off" for 10 us (as per the previously mentioned duty cycle of 50%). During the "on" period, the capacitor voltage will reduce by 0.5 volts and, for the "off" period, it will rise back by 0.5 volts hence capacitor ripple is 0.5 volts p-p.

If the input voltage to the inductor (from the panel) is constant and the inductor is (say) 100 uH, it will see a change in voltage of 0.5 volts over a 10 us period.

Now here's a little cheat - assume that that voltage change is instantaneous (it's a triangle in reality) and, using V = L di/dt you can "estimate" what di/dt will be into the inductor.

Like I say, this is just an estimation based on me cheating by saying the change in voltage across the inductor is instantaneous (rather than triangular shaped). So, I would expect to see the panel feed an average current of 5 A with a superimposed ripple of no more than 50 mA p-p. Might be worth simulating...... 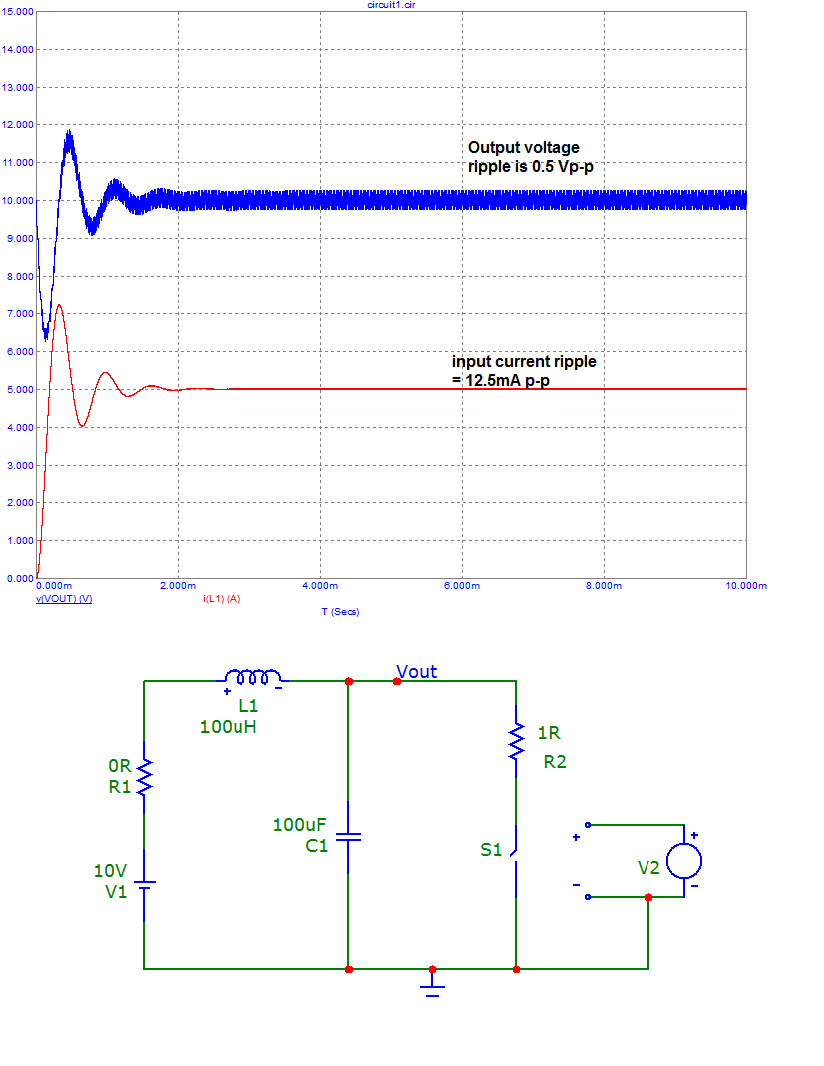 Hmmm, not far off - output ripple voltage is spot on and input ripple current (barely visible) is one-quarter of my somewhat exaggerated calculation.

That's the power of simulation.

The simulation also tells you that there might be a significant transient on power up that might exceed the input supply limit on the converter - watch out for this.

Then I_out is pulsed current (MPPT reg?) so I_out2 * duty cycle is related to I_out

I prefer to work in transfer functions using Z(PV) , ZL(f), Zc(f), Z_bridge) where PV is a quasi-current source with a V limit, Voc but when supplying power has an effective minimum Source impedance of Vmp/I... then choose L, C based on Z(f) to create a low source impedance for better load regulation of current pump to battery

Not the answer you're looking for? Browse other questions tagged filter dc-dc-converter transfer-function passive-filter or ask your own question.

11
Feeding a Full-Bridge from a Boost Converter?
0
Does a boost converter lower the source current of a solar panel?
0
Common mode filter
1
Why the magnitude response of my low-pass passive filter is not flat at some frequencies?
12
Takes days to charge phone from 10W solar panel
1
How to design filter for inverter for following cases?
0
How to design this filter?
0
Placing an RLC input filter at the input of a buck
1
Drop input voltage for a boost converter