How to chose the right voltage and coil(s) for coilgun?

I've seen people making these and it seems to me as a safer alternative of railgun, though still very dangerous.

I'd like to ask how to reach good balance between different aspects of the design. There are three things that are kinda in conflict and all have positive and negative effect:

Is there a simple way to calculate or guess optimal parameters? I intend to make a gun that is safe enough to make at home with precautions but also powerful enough to shoot objects off a table.

I think you need to understand at what point the magnetic field needs to begin collapsing in order to prevent the projectile decelerating and hence losing built-up momentum. I have done a simulation of a 44 mm long 10 mm radius air cored solenoid to enable to concepts to be more clearly seen. I have made it this shape just for my convenience in answering and I have no-idea if this is shape is useful in the real thing. Below is a picture of the flux density inside and outside the solenoid along with the gradient of said flux density: - 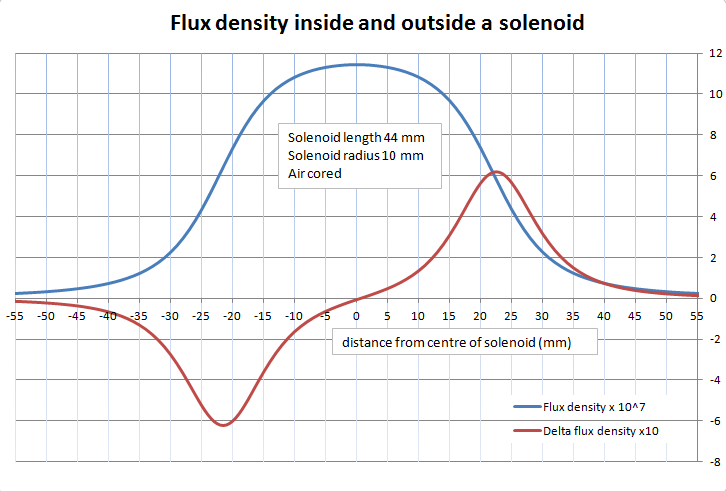 So, it's important to look at the gradient (red line). If the projectile enters from the right, the force that accelerates it is maximum as it enters the solenoid (for a typically small projectile). After it has entered it will still accelerate but to a lesser degree until it reaches the solenoid centre. At this point it will start to decelerate (not wanted).

The upshot here is that you need to start turning the mag field off somewhere between the projectile entering and reaching dead centre. This is impossible to do instantaneously because of the solenoid's inductance but given that you can measure the inductance at least you can begin to calculate when to start the process (noting that any magnetic field remaining as the projectile passes dead centre is going to slow it down).

Here are a few extra formula and observations that might help.

The force exerted by a solenoid on a ferromagnetic object is: -

Also, for a solenoid, inductance can be calculated thus: -

So, making the inductance bigger makes the force bigger and, to keep turns as low as possible you want the length of the solenoid to be a short as possible.

However, with a bigger inductance it takes longer for the current to ramp up to maximum and this will reduce the effectiveness of a coil-gun due to not being able to accelerate the bullet to sufficient speed.

Not the answer you're looking for? Browse other questions tagged safety high-voltage coil high-current or ask your own question.

3
Switching high current and high voltage for coilgun
5
Need to create a magnetic coil (no core) for low frequency field (20Hz-100Hz)
6
increasing metal detector range
1
How to optimze a coil for needed voltage?
2
Are my calculations wrong?
0
Design considerations for bifilar coils for Wireless Power Transfer
0
Stacking M.O.T. to create an E-E core
0
A coil I built has divergent measurements respective to wire resistance and AWG size