What is this canister at the top of a utility pole?

I'm currently in Manuel Antonio, Costa Rica. I'm living in a relatively off-the-beaten-track house and at the top of some of the utility poles leading to my house are these canisters (the light grey thing with "IC" on it): 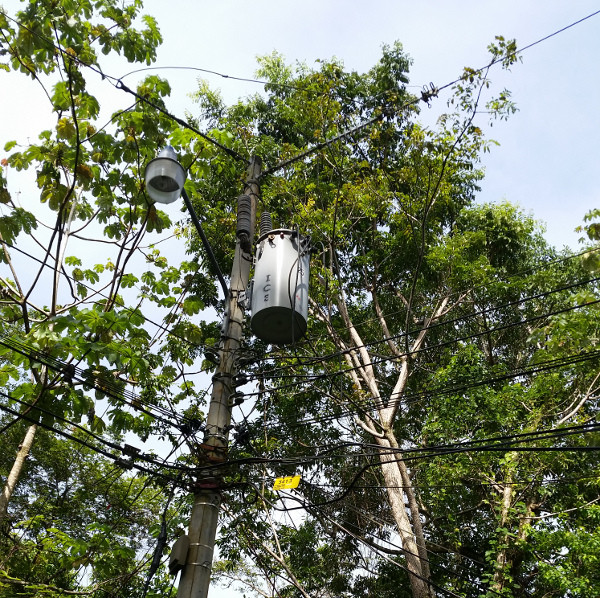 What is that? Is it a super localized transformer for the light fixture? Is it something else?

On the 5m walk from the main road to my house, there are many instances of these.

NB: this is in Costa Rica, not the US.

So, a second question is... what is the equivalent of this in the US? Or is it common in more rural parts of the US? (I live in a city, normally).

It's a distribution transformer, aka 'pole pig'. It lowers the voltage from the higher voltage in the supply lines to the power used in your house. The distribution lines that run down your street are probably 5-15kV. From the length of the insulators, probably towards the higher end of that spectrum. They contain a transformer and oil used for cooling (in earlier days that oil would contain hazardous PCBs - PolyChlorinated Biphenyls, not printed circuit boards, though I do have a warning sticker on my computer that says it contains PCBs).

Since Costa Rica uses 120VAC/60Hz the secondary voltage probably is center-tapped 240VAC 60Hz as used in Canada and the US.

At a higher level in the distribution food chain, the electricity is all 3-phase but it's common to only distribute the 3-phase along major thoroughfares and then bring a single phase down a smaller street.

These are quite common in North America - in rural and in suburban environments. Only in major cities where the utilities are kept underground are they not seen.

Edit: The IC is probably part of the ICE logo (Instituto Costarricense de Electricidad), the state-run electricity (and telecom) company.

There is a transformer (voltage converter), some insulators, and a lamp. 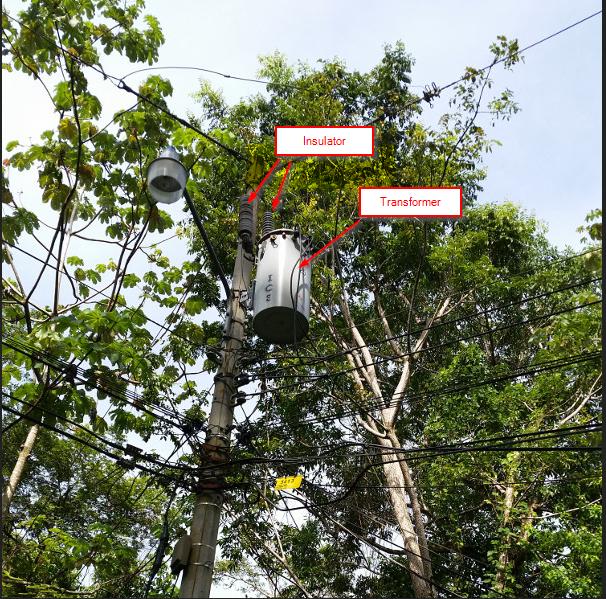 The large grey cannister is a transformer lowering the high voltage from the long distance power line into the voltage you use at home. Most probably you have 110 /220 V ac. if you are in the USA. The other element with glass is your street lightfixture. If you follow the 3 thick wires comming from the transformer they will go to your house connection. Such socalled pole transformers are widely spread in many countries in the world. In western Europe however you hardly find them because there most house connections are under the ground. The transformers are there placed in little stations. Now we are to it accros the insulator as mentioned in the other answer you find mostly high voltage fuses. They are there to disconnect the transformer from the High voltage supply in case something goes wrong. They also enable the technicians to disconnect the transformer from the supply if work needs to be done.

Does Costa Rica have 50Hz power? Many European and island countries do. In any event, that is a Single phase primary, with one (the top) ungrounded high voltage conductor (sharing the grounded/neutral with secondary. The secondary is single phase, three wire, 240VAC/120VAC. Power companies do this in residential areas because it is more practical/cost wise than three phase systems.

BTW Three phase Wye systems are 208VAC/120VAC, with phase-to-phase voltages being 208VAC, and phase-to-ground being 120VAC. This is great for buildings that require more 120VAC circuits because all three phases can be used. A Delta 240VAC/120VAC with 208VAC Hi Leg is great for commercial industrial because you get the full 240VAC phase-to-phase for motors, etc. But that 208VAC to ground Hi leg is problematic! I have seen (never did it, of course) what happens when someone connects a 120VAC appliance or luminaire to the 208VAC Hi Leg and a neutral.