Pull-up Torque: The Pull-up Torque is the minimum torque developed by the electrical motor when it runs from zero to full-load speed (before it reaches the break-down torque point)

The pull-up torque may be critical for applications that needs power to go through some temporary barriers achieving the working conditions.

I can't find anywhere in this text( and in other articles on the subject) WHY the torque lowers a bit(inflexion point) and then it raises again. What is the mechanical explanation for this?

This is what Allen Bradley say about pull-up torque: -

Please click on picture to help but in words, the specific sentence is: -

Info taken from this document entitled

By reducing the eddy current rotor losses from thick metal squirrel cages, the motor has less iron and less starting torque but more torque for fans at high speed when the slip speed is smaller.

A rotor bar that is close to the surface of the rotor has a low leakage reactance reactance while a rotor bar that is closer to the shaft has a higher leakage reactance. If the rotor is constructed with two rotor bars, or one elongated bar that extends toward the shaft, the effective rotor resistance is high at locked-rotor and low at the normal operating point. That happens because the rotor frequency is high at high slip and low at low slip. At locked-rotor, the rotor current is forced to flow mostly in the low-reactance part of the rotor bar near the rotor surface. The effective resistance is increased by reducing the bar area in which the current flows.

There is a Chapman text that explains and illustrates this quite well.

Here is a link.

Pull-up torque is not the name of a special or undesirable phenomenon. It is a standard part of an induction motor performance specification. The NEMA definition is:

It is clear from the above linked reference and from similar references that rotor bar shape, position in the rotor and material are the primary factors used to shape the torque vs. speed curve of an induction motor.

Harmonic torque is generally minimized by several aspects of motor design. One factor is the selection of the number of rotor bar slots relative the the number of stator winding slots. Another is "skewing" the rotor bar slots at an angel relative to the shaft direction. A third is the distribution of the stator windings to produce a sinusoidal flux wave.

One undesirable effect of harmonic torque is a distinct dip in the torque vs. speed waveform as shown below. That is different from the relatively gentle inflection in the torque curves of some production motors. 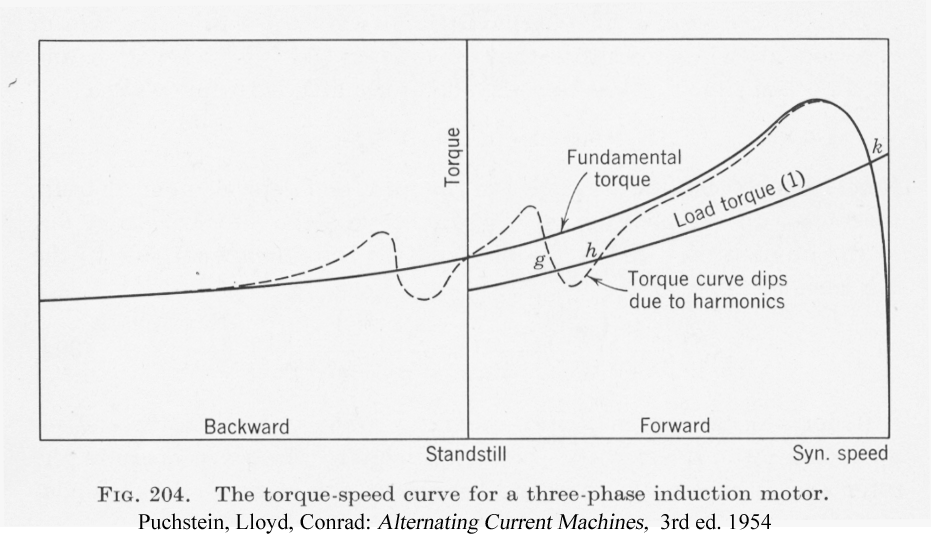 The following figure shows the torque vs. speed curves for various double squirrel-cage rotor designs and one deep-bar rotor design. One of the deep-bar curves shows the minimum (or pull-up) torque occurring above the zero-speed (locked-rotor) torque. Note that this is a side effect of raising the stall torque, not a design that lowers the minimum torque. Thus is is not the result of poor design. The various "m" values refer to a constant that is defined to simplify the motor performance equations. The value of m = infinity indicates a motor with no double-cage or deep-bar effects.

Standard motors have sufficiently deep rotor bars to produce a curve above the m = infinity curve but a bit below the m = 2 curve. Sometimes the curve has a minimum torque inflection point below the locked-rotor torque, 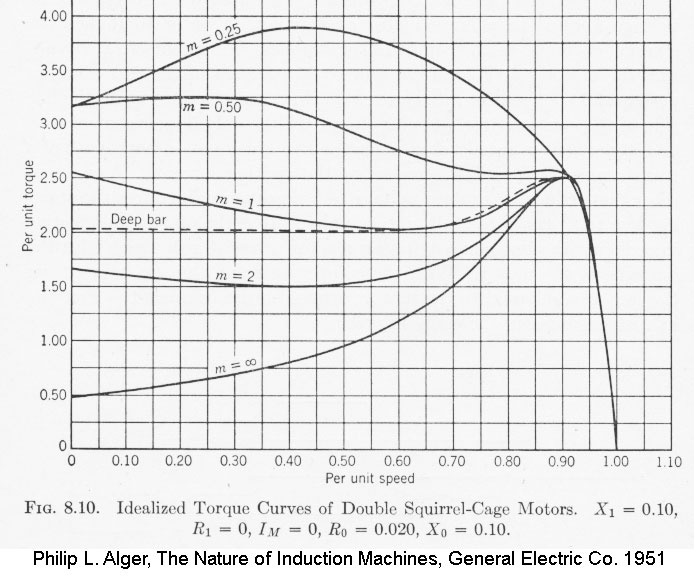 Alger describes the effects of harmonic fields using a diagram similar to the above Fig. 204 from Puchstein, Lloyd, Conrad. According to Alger, an acceptable design must minimize such effects. On the other hand, a minimum torque infection point above zero speed is accepted by international motor standards.

To address a comment; "pull-up torque" is not a phenomenon it is a point on an induction motor torque vs. speed curve that is defined by international standard. If there is a minimum point on the curve that is above zero speed and above the minimum set by motor standards, the motor meets standards.

Not the answer you're looking for? Browse other questions tagged pullup induction-motor torque or ask your own question.

1
Torque-Slip Characteristic Stability Analysis for Induction Motor
0
How does skewed conductor on the rotor of squirrel cage decreases crawling affect?