I have a triac DIAC cirtcuit. I don't have any DIACs on hand, but I do have plenty of TN1215s. Is it possible to generate the required pulses using an SCR to drive the TRIAC's gate?

The circuit will quite likely work without the DIAC - i.e., short out where the diac should be until you can get one - but may be a bit "twitchy".

Without the DIAC the TRIAC will turn on when the trigger voltage gets high enough. The problem is that this is not very well defined and will vary depending which quadrant the triac is operating in and, probably, with temperature. 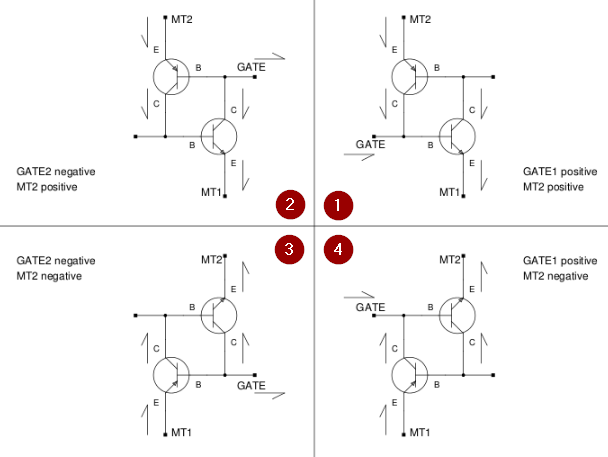 Note that your circuit works on quadrants 1 (both mains and trigger positive) and quadrant 3 (both negative) only.

If the triac triggers levels in the first and third quadrant then there may be a noticable flicker between positive and negative half-cycles particularly on the romantic end of the pot.

The DIAC solves this by holding back the trigger until the capacitor voltage rises to about 22 V (if my memory is right) and then allows the capacitor to discharge through the gate pin. The point is that a fraction of a volt difference on 22 V will result in less phase angle difference between positive and negative half-cycles than directly triggering. The downside with the triac is that you can never get 100% power.

Not the answer you're looking for? Browse other questions tagged pwm triac scr thyristor diac or ask your own question.

7
Why do we use a diac for triggering a triac?
0
Phase control up to 40A with TRIAC and DIAC (Optocoupler)
7
Is there a good reason to use an SCR based speed controller instead of a TRIAC?
1
Verification of SCR Driving Circuit
0
SCR triggering using DIAC
2
How DIAC works?
3
Problem with SCR latching circuit
0
DIAC datasheet's circuit is not in series with TRIAC's Gate
0
Can a Triac be driven using only positive voltage due to the laws of Q1 and Q4 quadrants?
0
TRIAC BT136 as DIAC BD3 conversion both have MT1 and MT2