The neutral wire is usually at 0V relative to earth right? Or 0V RMS? HYPOTHETICALLY, if one were to stick a knife into the neutral hole, would they be fine?

Edit: Would the outer-pin of a laptop charger always be neutral regardless of the polarity of wall socket?

The neutral wire is usually at 0V relative to earth right? Or 0V RMS?

The 0V is relative to earth, in theory. When the neutral wire carries some current from devices, the resistance causes a small voltage between neutral and earth.

Besides, RMS does not mean "relative to hot wire". It just tells how voltage is expressed.

HYPOTHETICALLY, if one were to stick a knife into the neutral hole, would they be fine?

HYPOTHETICALLY, yes. Though, don't to this!

Some outlets have a distinct orientation, some have not, like this Type-F used in Germany:

There is absolutely no rule which one is neutral and which is hot. It is sometimes said to connect neutral to the left when the outlet is mounted with the holes aligned horizontally, since then it's the same as Type-E, which is used in France, for example: 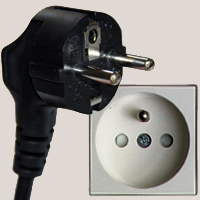 "The purpose of grounding the electrical system as stated in NFPA 70: National Electrical Code (NEC) is, “To limit the voltage imposed by lightning, line surges, or unintentional contact with higher-voltage lines that will stabilize the voltage to earth during normal operation.”

Power distribution is regulated in countries with good infrastructure to 5% for transmission load variation and 5% for distribution.

In split phase delivery in America, since Neutral carries the return current for both L1 and L2, the voltage drop is expected to be less or near zero, if they are balanced. If notm then an voltage difference drop of up to 5% can occur when the breaker panel is loaded on one phase only with I^2R voltage drop from this imbalance.

We do not see much here, but your location is different.

Appliances using a 2 pin plug must be "Double insulated".

The possibility for Neutral to rise with lightning transients is greater with exposed power lines.

However that being said, there are line filters which conduct EMI noise pulses to ground to reduce interference and on laptops this ground barrier stops in the external battery charger and is not passed onto the laptop case ground, so the laptop is "floating" and limits ground current from lightning transients by the quality of the insulation.

i.e. your laptop is never grounded, unless you connect it externally.

But due to the high frequency noise currents to ground ( up to 0.5mA permitted) you may experience a tingle if your laptop touches a sensitive body area like a wrist or kneecap when your feet are wet or hands earthed to plumping and you bump laptop on counter with your wrist. It can also degrade external mic noise with hum until the laptop case is grounded say thru the VGA port to a external monitor. This makes the EMI common mode noise much less for the high impedance mic but also increases risk for ground faults but unlikely in a redundant grounded stationary monitor.

I hope that makes sense....

Neutral is defined by the socket (or not)

Each plug or socket has a design specification. That decides where neutral goes. For some socket types, it does specify at all.

Keep in mind that the very concept of neutral is not at all a given. Consider NEMA 6: no neutral, it's not in the connector.

Consider 480V "delta" (non-wild-leg), it is an isolated service which inherently has no neutral. It can be provisioned as an isolated system with no bias to ground.

Neutral Is Not Ground

The Electrical Codes define neutral as a conductor, which means working current normally flows over it. Ground is not a conductor, and is not counted where conductors are considered, such as wire heating and eddy current effects. Current never travels on ground except during a fault condition.

Stick your knife anywhere you like - at your peril

If you stick your knife in the neutral pin, provided the system is healthy, you are OK unless you are also touching something at "hot" potential. However if your system has a problem, that may not be so. Electricity follows all possible paths back to source, in proportion to their conductance (inverse of resistance). If you have a damaged neutral or a broken grounding system, its conductance may be low enough that you look like a usable path. In which case you will be shocked.

The goal of neutral (and ground) is to give a much better path than you.

http://hyperphysics.phy-astr.gsu.edu/hbase/electric/elepic/recept.gif It's supposed to be the left one if you're in the US.

The connection of neutral and live on the socket is not regulated in many if not all countries in Europe. UK is most probably an exeption. The reason is simple. The plug can be inserted either way. So it only makes sense in situation where the plug can only be inserted one way.

The voltage level of the neutral is intended to be 0V in respect to the PE (protected earth). These both lines come in most situation together on the distribution transformer. There the neutral and PE are connected to a large earth electrode.

In socalled balanced systems (three phase) the neutral did not carry a lot of current in the past. This however is changeing due to the use of led systems where the 3e harmonic of the mains frequency causes a strong current in the neutral conductor.This results in the situation that the neutral is not always at 0 V in respect to PE anymore. In new installations the main cables are thicker so the problem remains under control.

Per French regulations, the neutral is on the left and the phase on the right.

However, at the wall outlet you will often find that the lines are wired "back to front" !

Neutral is on the left for a UK BS1363 socket outlet (square pin 13A plug). This is labelled '2' in the graphic below, the blue conductor is neutral. 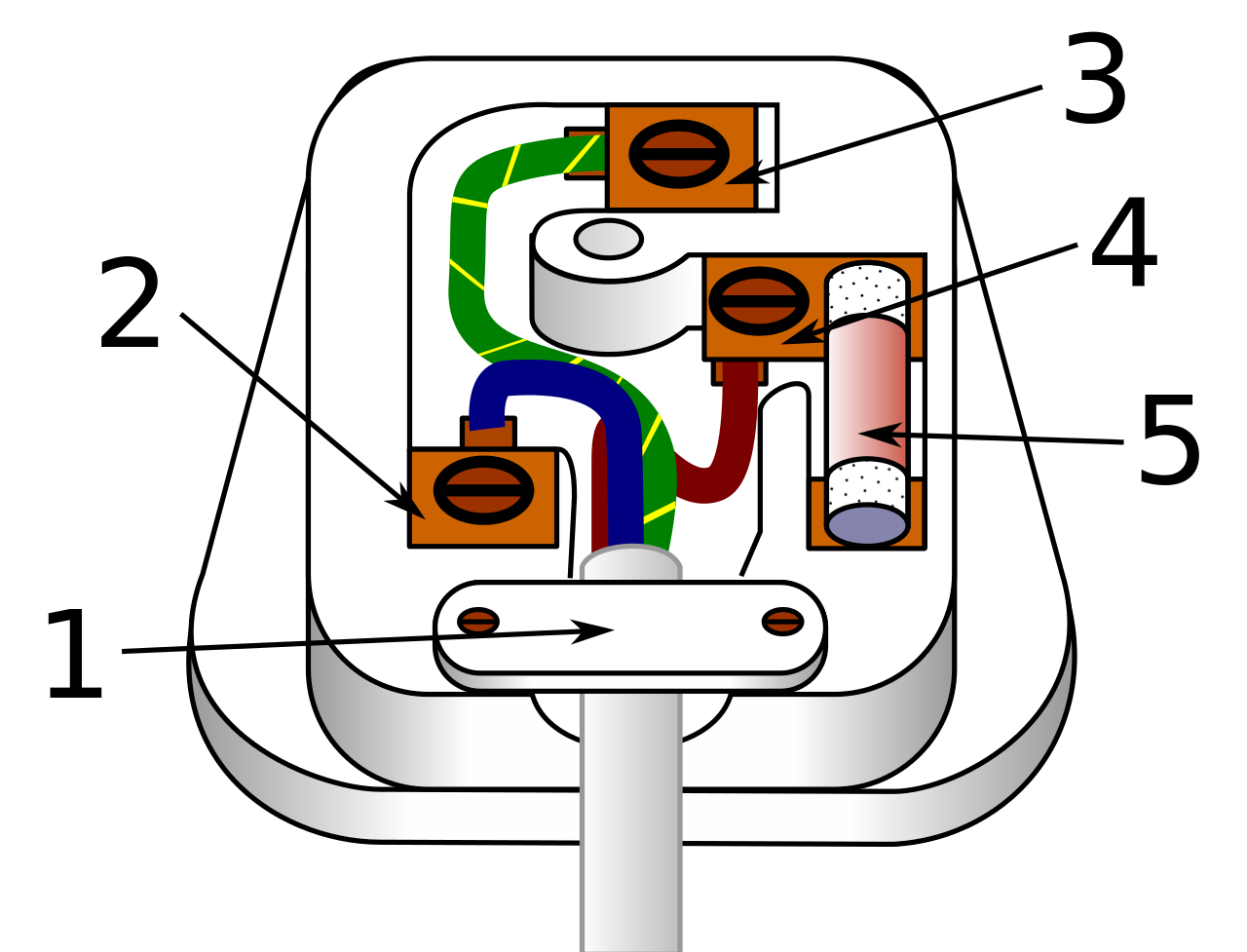 In the UK, there are various different ways that the neutral can be connected to earth (in the property or on the distribution network, or at multiple locations (PME)), so it is typically only a few volts away from earth. However, it should never be considered safe to be touched until the circuit is reliably isolated.

If you want to learn more about UK earthing and neutral connections, you might find this IET publication useful.

And in answer to your later edit, the DC output from a laptop power supply should be isolated from the mains input, so shouldn't be connected to any of the pins of the mains plug. This is required for EU safety compliance, and presumably similar in most other countries. However, some supplies have poorly designed insulation which can easily fail and create a connection from mains to low voltage.

Not the answer you're looking for? Browse other questions tagged voltage current ground socket neutral or ask your own question.