After reading [Mike DeSimone]'s response regarding good decoupling and bypassing practices I kept wondering about distance between wires (wire = trace or net) .

[Mike DeSimone] comments that wires going to different nets should be as close as possible, but that wires that go to the same plane should be fairly appart.

Therefore, a pair of wires going to the same plane should be far apart (rule of thumb: greater than twice the distance from surface to plane; assume the PCB thickness if you don't have your stackup figured out yet) to reduce total inductance. A pair of wires going to different planes, such as every example you have posted, should be as close together as possible.

··· Give the IC its own vias to power and ground, keeping opposing-net vias near each other and same-net vias farther apart ···

Now, all my designs have always been low frequency (<1MHz), but I recall having used, for example, more that one via to connect an MCU to a power plane. Or have used several vias to increase the maximum current of some traces that have to change layer, similar to this post. And I have placed them very close together (actually, as close as I could).

Could you please give me some insight on this matter? What is a good distance between vias or traces to avoid parasitic inductances?

I understand I can create a loop with two vias (perpendicular to my PCB), that is, if my vias are in series. But I fail to see how this can happen if they are in parallel or tie two unrelated components to the same net.

I have searched SE and googled, but found nothing useful to the matter of via clearance and the associated parasitics.

The more via's you use in parallel the less inductance you have. Each via can be modeled as an inductor with a few 10's of nH. If you really want to find the inductance closely there are calculations available on the internet that can help find what the inductance is based off of the dimensions of the via.

This is important if your designing for high speed (lets say 50Mhz+) as inductors with nH in conjunction with other components will form filters and limit the upper frequencies that the trace can carry. If your designing for low speed power planes, when a transistor switches in the microprocessor it will consume power from the plane and cause the voltage of the plane to dip below or above the intended value of the plane.

The power plane will recover as fast as it can get power from the source, if there is any parasitic inductance and or resistance it will limit the ability for the plane to 'recover' to its intended voltage.

Think of it this way: 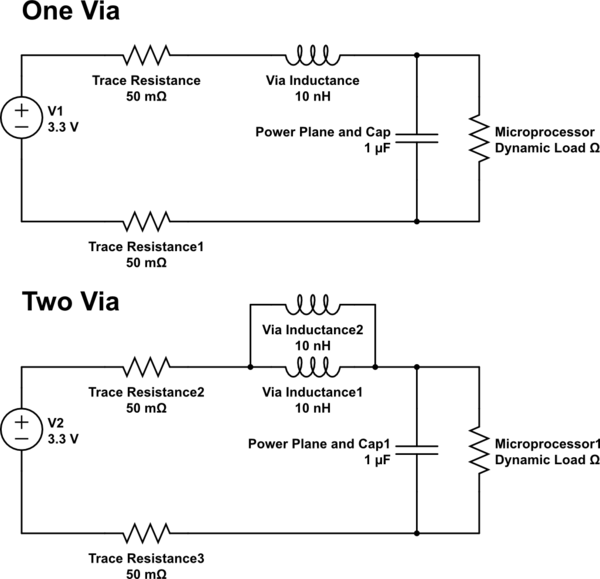 The processor is a dynamic load, it changes when transistors switch on and off. If the processor is using ~100uA when its sleeping and you wake it up and it then needs mA, this change can happen in the nanoseconds time frame. The inductance 'impedes' the power supplies ability for the current to get to the processor.

Not the answer you're looking for? Browse other questions tagged inductance via trace best-practice clearance or ask your own question.

243
Decoupling caps, PCB layout
1
Should there be more clearance on RF vias with microstrip?

20
How to chose via diameter and drill size based on trace width
1
What are these gaps in PCB polygon pours near vias of the same net?
0
Parallel inductive coupling approximation - coupling coefficient
5
From a flux point of view, how can we explain that the equivalent inductance is half when identical inductors are connected in parallel?
0
Why are inverter bus bars made overlapping?
2
Matching via sizes to trace widths
2
Self inductance vs loop area of inductance. How to combine them/which to pick in which case?