Has LTspice been extended to support the modified-Chan, non-linear hysteretic model for coupled inductors (transformers)

I'd like to figure out how to simulate coupled, non-linear cores using the included modified Chan model in LTspice and I'm specifically interested to know if LTspice has ever been extended to support transformers, using the modified-Chan hysteretic core model that Mike Engelhardt announced back in 2004 for LTspice. (I have already searched the LTspice archives on Yahoo Groups and found nothing much since about 2004, when it was announced.) Mike Engelhardt, writing on April 24th, 2004, explicitly said that this new (then) hysteretic model wasn't supported for coupled inductors.

I'd like to know if anyone here is aware if LTspice has since been extended to support coupled inductors using the above-mentioned model, and if so, if they may have attempted to use it to validate a transformer design.

For those otherwise just curious about this arcane part of LTspice, it allows an inductor to use "a model first proposed in by John Chan et la. in IEEE Transactions On Computer-Aided Design, Vol. 10. No. 4, April 1991 but extended with the methods in United States Patent 7,502,723."

In the schematic entry process, it achieves this by using a strangely attributed inductor, where the symbol attributes to use are: Value, Value2, and SpiceLine, as shown in this extraction from a schematic file:

And I believe it supports it with a specialized "L" Spice model line in the spice netlist deck.

I've already done the usual search on this site. I have examined the following obvious links: transformer with hysteresis in ltspice and modeling transformer in ltspice and also ltspice how to make a time variant mutual inductance coefficient in transformer. I also did a search for the specific parameters of "Lg=", "Lm=", "Bs=", and "Br=", as well as it may relate to transformers and LTspice. I'm coming up a bit short.

It's probable that LTspice still doesn't support coupled non-linear inductors using this hysteretic model. I'm hoping that someone may know better than this, though.

LTspice supports the Chan core since long ago. Unfortunately, it doesn't support direct coupling with other than linear inductances (i.e. the default inductance). However, as you found out in your searches, there are ways to circumvent this. If it were me, I'd use this link for my needs, but there are other links, as well (and also some examples in the default installation of LTspice).

A few remarks: there is no "specialized" symbol denoted L, that is the general SPICE notation for inductance, ever since 40+ years ago. The parameters are specialized, and this can be checked in the LTspice manual. Even if it is pretty spartan, I highly recommend reading it, at least once, it may save you tons of searches on the net. Also, in the LTspice Yahoo Groups archive and message list there should be more than enough examples to get you started, if the LTwiki link doesn't do it for you.

This is a simpler version to that from the LTwiki, it only accounts for primary/secondary resistances: 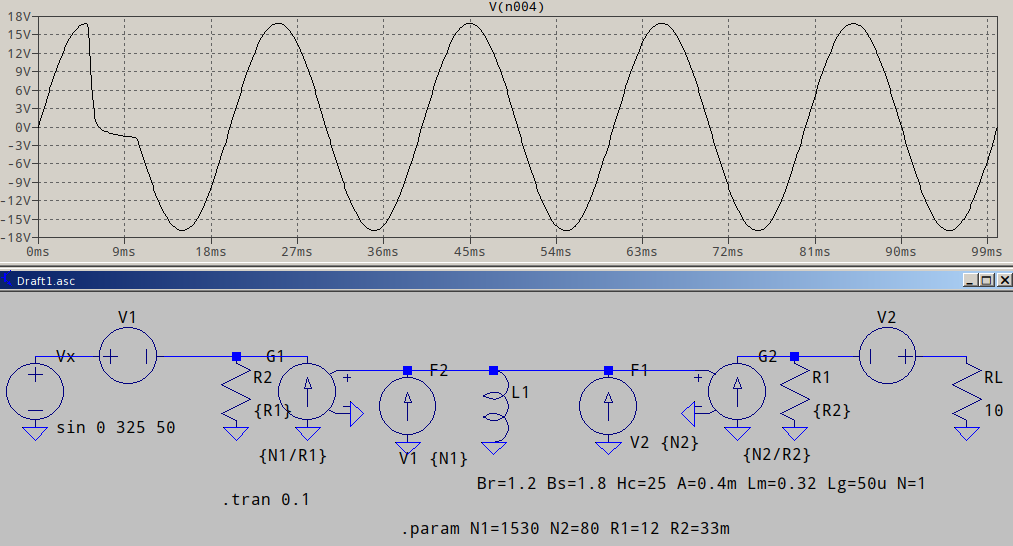 Note that I used G sources for their superior convergence over E sources. If you need more than two windings, extending this should be fairly easy, as the Chan core is only used as a "prototype", with one turn; the sources take care of the windings (and anything else that may be added).

The example on the LTwiki, though, should be pretty self-explanatory, I'm afraid that, if you are looking for a simple, "place L, add coupling" sort of transformer, there is no such thing and you're likely be asking for external libraries which will, most probably, have the same arrangement under the hood.

2
What is the syntax for modelling a non-linear element in Spice?
4
LTspice model for LM317 and the calculators gives different output voltages for the same resistors values
1
Slow solution of LTSPICE electric-magnetic model for transformers