Is it safe to drive multiple 'strings' of LEDs in parallel?

I am thinking of driving COB LEDs (rated at 10 W normal power) at 3 W.

I can drive a string of 4 LEDs maximum in series.

Is it safe to drive 8 of these strings in parallel?

The LEDs are designed for a constant current supply which produces whatever voltage is necessary so reducing the current would be effective in dimming the LEDS.

Rohat calculated that the supply output would be a constant 700mA and for 3W per light you need 86mA each. Putting 8 lights in parallel would give 700/8=87.5mA per light which is about right, but that assumes they will share the current equally. The problem is that LEDs have a fairly sharp turn-on so whichever bulb has the lowest forward voltage will take almost all the current and die, then the next lowest would blow and so on. Unfortunately, whichever takes the highest current will heat up most and that will probably drop the voltage futher giving thermal runaway.

What you would need to do is add something to equalise the currents, a series resistor as shown would do but I suspect the value needs to be higher than shown in the circuit, at least the maximum forward voltage variation divided by the current variation you can tolerate. As the LEDs can take up to 350mA, that is fairly easy but you probably want to keep the brightness of the bulbs fairly similar so for example 10% brightness variation implies no more than 8.6mA difference between the bulbs. Higher values of resistor will maintain more even brightness but will increase heat dissipated in the resistors. The advantage is that including 8 resistors is a lot cheaper than separate drivers.

P.S. You probably realise that the supply voltage need only be 35V plus the resistor drop so a 144V-capable supply is much more than you need, it is really intended for driving multiple bulbs in series so that all get exactly the same current and hence brightness.

If you have a 100W CC (constant current) driver with maximum output voltage of 144V, then the output/rated current should be about 0.7A.

As you might guess, you cannot connect all the LEDs in series.

Let's think about this: 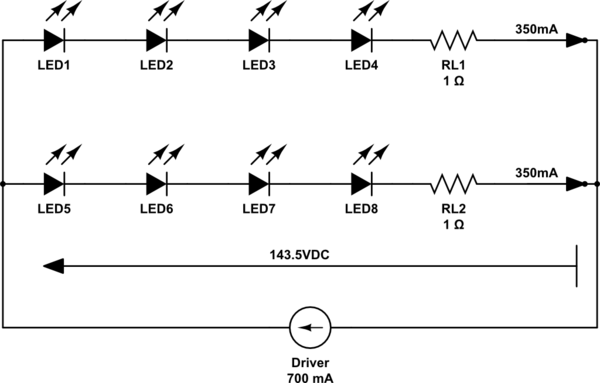 It's clear that LEDs will break down because of 350mA constant current per strip.

The datasheet given indicates that the current consumption of the LED system is given at a nominal value. In other words it can be more or it can be less.

Voltage driven LED systems have an internal arangement to keep the current at the desired level. If you put such systems in series the voltage distribution might not be uniform. This leads to the risk that some units have an overvoltage and become defective. So it is not a good idea to put this type of led in a series parallel combination as asked.

What you can do is give each system each own driver and supply all the drivers together with a PCM modulated signal ( maybe dmx? or 0-10V) to come to a desired result of 3W per led (30% pcm duty cycle).

It is possible to place more then one module in parallel to a driver.

You could look at the LT 8048 DMX driver. This driver can supply a max of 4A per channel.