I wonder if it'd be a relatively straightforward exercise to read data from a 3.5mm audio jack using an Arduino and a raspberry pi. The communication will be one-way only: raspberry pi transmits data to Arduino, so the Arduino will do the reading. Does anyone know how this could be accomplished without using a modem?

The other answers seem to involve using 3.5 mm jacks and an audio cable just to carry a typical serial digital signal from the Raspberry Pi GPIO ports: e.g. wiring asynchronous serial, SPI or I2C to a dedicated external 3.5 mm jack which is not the audio jack on the Pi.

Yes, but it gets more complicated. The raspberry pi audio output looks like this: 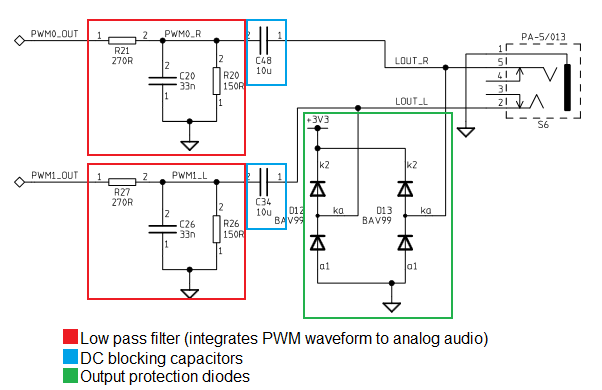 Two pulse-width modulated (PWM) square waves are produced by the Broadcomm SoC (off screen), and are then low-pass filtered (to produce an analog waveform) and fed into the 3.5mm jack. DC blocking capacitors ensure that the output has no DC offset. The diodes protect against voltage transients.

The audio output is (capacitively) AC coupled; The DC blocking capacitors together with the load and source impedance will act as a high pass filter, blocking frequencies below a few tens of Hertz. Thus you cannot use DC-imbalanced signals to communicate.

You have to encode or modulate the digital data somehow, so that you can pass it trough an AC coupled line. There are many suitable encoding schemes, most notably manchester coding, 8b/10b encoding or 4b/5b encoding. Such signals can then be decoded at the arduino end by feeding the signal to the analog comparator input, feeding the comparator output to the Timer 1 input capture unit (so that every reveived rising and falling edge gets a timestamp), and then decoding the stream in software. As the audio output is designed with the human hearing range in mind, I wouldn't expect a bitrate greater than about 10 kbps (probably much less, depending on the encoding scheme used).

There are also various simple modulation schemes such as Frequency Shift Keying, Phase Shift Keying, Pulse Position Modulation and On-Off Keying which can be demodulated relatively easily with just the analog comparator and a hardware timer.

If you want to go grazy you can also synthesize a digitally modulated analog waveform at the raspberry pi end, sample it with the arduino ADC and demodulate in the digital domain. With something like quadrature amplitude modulation you could get a fairly respectable data rate even with the limited bandwidth and processing power available, at the cost of more software complexity.

Modulation differs from encoding in that you modify properties of a constant repeating waveform with the data being transmitted instead of modifying the signal itself. Modulation permits transmitting a signal of a certain frequency range at a different frequency range, which is crucial for e.g. radio communication but isn't needed in this case as your original signal (baseband) is already in the frequency range of the communication channel, so encoding without any modulation can be used. Combining encoding and modulation is also possible.

It's possible, albeit ill-advised, to connect UART to UART directly. More reasonably, a pull-up resistor, some series resistance to limit the current when shorted or if the Arduino input was accidentally switched to output and ESD protection could be added, staying with the inverted levels. The Pi is 3.3V and most Arduinos are 5V but the ATMega chip is guaranteed to read a 3.0V input as 1 with a 5V supply so it should function.

Or add an RS-232 driver to one side and an RS-232 receiver to the other to use standard RS-232 levels, at the expense of something like a MAX232 chip and 5 capacitors at each end. The higher voltages of RS-233 levels might be more reliable with a low quality connector, and the noise immunity would be many times higher.

If you don't need to send scads of data, a common protocol is 9600 baud, no parity, 1 stop bit, which allows almost 1K bytes per second to be transmitted.

Seeing as how a 3.5mm jack connection gives you 2, 3 or 4 lines (maybe more, no doubt others can tell us). You can quite easily use it to transmit digital data via any one of a plethora of serial communication protocols. Off the top of my head: RS232, SPI, I2C, Single Wire Interface, no doubt many others, including your own one if you felt so inclined.

The hard bit will be making sure that both the sender and receiver are set up correctly, which we can go into detail about once we know how many lines your 3.5mm jack has, which protocol you want to use, physical distance of communication and data rates required.

Alternatively, if you just want to read the sound wave off the audio jack, you can connect to the ADCs of the Arduino, assuming the voltage levels are within safe operating range. The limitations on this will how quickly you want to sample the data, how much noise rejection you want, voltage range, resolution and accuracy of the reading.

Basically what I'm saying is: Yes. If you want more details, ask a more specific question.

Not the answer you're looking for? Browse other questions tagged arduino audio modem or ask your own question.

5
How to read data from a 3.5mm headphone jack?
0
How can I detect a pulse from a device with the AC'97 component of a Xilinx Atlys board?
0
Regulated audio input
1
Mobile microphone input data throughput via audio jack?
0
Send data to an Arduino by using an audio cable
1
An audio jack modem
4
What is the purpose of this solder jumper?
1
Electronics Newbie - How can I mute speakers when 3.5mm is plugged into female jack? (with volume control)