Some confusion on basic antenna theory and crystal radio antenna

I found a similar question here:Making a suitable antenna for a crystal radio but it didn't satisfy my questions.

Imagine an AM crystal radio as in below illustration:

Most of the time the ground of the coil is actually connected to the "earth ground". (I still don't get why)

Isn't the antenna size related to the wavelength of the radio signal of interest? Why is not both terminals of the LC circuit not connected to two very long wires proportional to AM carrier wavelength instead of earth. I also would be glad if someone might explain how can small antennas receive long wave length radio waves? I mean isn't it that according to the antenna theory the antenna arms should be approximately 1/4 wavelength long?

I also would be glad if someone might explain how can small antennas receive long wave length radio waves?

Any piece of wire (even a straightened paper clip) will receive a radio wave of any frequency but it makes sense to get a good signal so that noise and other undesired phenomena are significantly reduced. This good sense means we can make the receive antenna to maximize the signal but, making it smaller isn't necessarily a show-stopper; you will likely get a smaller signal but that doesn't mean it can't work.

This is for a monopole antenna and it is assumed to be vertical. When the antenna is one-quarter of a wavelength we find that the impedance is purely resistive and therefore it can deliver maximum power to or from relatively easily. When the antenna length is 0.47 wavelengths it is also resistive but has an impedance that is significantly bigger.

If we consider that your question is about "short" antennas we can see why this becomes suitable for a xtal radio. Say the antenna length were 0.05 wavelengths, the reactive impedance would dominate things at -j1000 ohms and this is convenient to avoid too much dampening of the tuned circuit.

Why is not both terminals of the LC circuit not connected to two very long wires proportional to AM carrier wavelength instead of earth.

That would be a dipole antenna configuration and is commonly used but not for xtal radios for two reasons: -

Basically a monopole is half a dipole and produces an imbalanced signal to ground: - 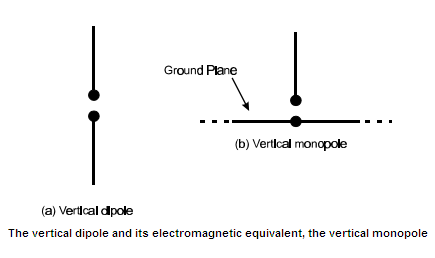 The downside is that you only get half the amplitude from the monopole but, on the plus-side there is a slight increase in antenna gain over the dipole due to the way the radiation field is formed.

One should discern between two types of antennas. Resonant and non-resonant. In Long Waves and Medium Waves a resonant antenna would be enormously long. Therefore one must do with some tens of meters of wire hooked up between outside walls or trees. This is only a fraction of the wavelenghts in question. These antennas are therefore just capacitors with the ground as the other "plate". They are so called "wide plate gap" capacitors. The electromagnetic waves may move in this gap. The antenna will pick up the electrical field component of a passing through wave and introduce this electrical field voltage into the resonant circuit.

Not the answer you're looking for? Browse other questions tagged antenna radio crystal or ask your own question.

6
Making a suitable antenna for a crystal radio

0
Antenna Diversity: two Yagi antennas to the Rx and Rx/Tx u.fl-male points on the wifi-NIC?
3
Simple AM radio - how to modify it so it can work without ferrite rod antenna?
5
Can unpowered radio work without ground connection?
7
Why is "wavelength" used as a unit for the length of an antenna?
0
Voltage gradient across an antenna (and how it drives an AM radio)
16
Can antennas be viewed as light sources?
0
Why do I get clear FM signals on my AM crystal radio?
1
Why do we need coils to produce electromagnetic waves?