The schematic below is the input circuit of a signalling PCB, which we buy from one of our suppliers of fire detection systems. Said PCB has to be built into a so called geographic evacuation panel which allows firemen to see in which zone of a building a fire has started, and as such is part of a safety system. 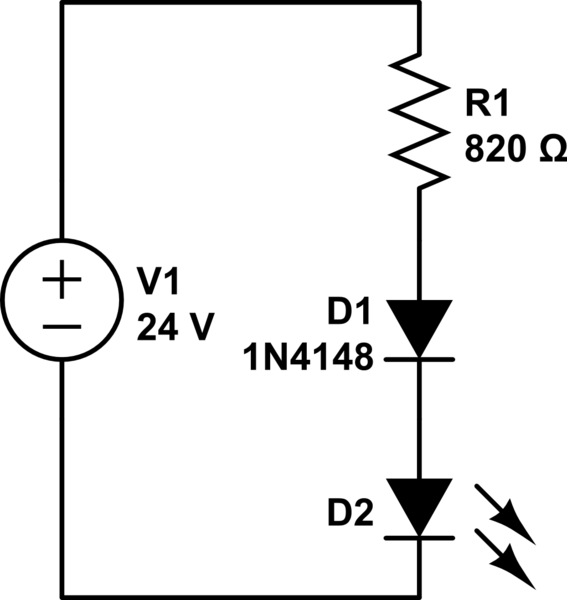 The LED shown is actually the IR LED of an optocoupler (needed for reasons of common mode rejection). Each fire detection zone has such an input. The optocoupler's outputs are fed into an Atmel MCU where they are processed in order to light certain LEDs on a floor plan of the building. In the absence of any input signals, the MCU will reset all LEDs on the panel.

The 820 ohm resistor is an SMD type, and from its dimensions I estimate it to be package 0805 and as such it is rated for 125mW. Documentation from our supplier claims the input voltage range is from 2.2 up to 24V. This is by design, in order to support many brands of fire detection computer. Not all, but a number of systems do actually output 24V. By my own calculations the resistor dissipates about 600mW at 24V input, assuming a total forward voltage of 1.9V for both diode and LED. Actually applying 24V at the input for as short as 5 seconds makes the resistor heat up so much that you can't touch it. At this point the input current is about 26 mA. As I am not very experienced with SMD components, being out of electronics for many years, I need to know if there is any risk that the resistor will burn out, and the panel will not do what is is designed for, potentially resulting in the loss of human life.

The moment the fire service can eyeball the panel is on average first detection + 15 minutes. This means that the resistors in the activated inputs will be subjected to those conditions for at least 15 minutes, in densely populated areas. In rural areas with less firefighting personnel this can be even longer.

Authoritative answers, or links to them, are highly appreciated.

Picture of a geographic panel: 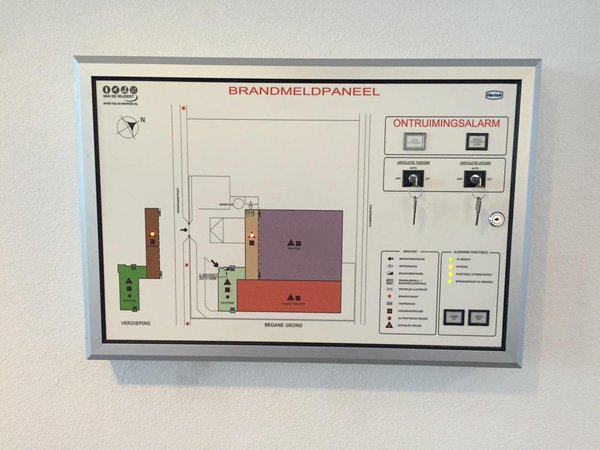 Picture of board with input circuit: 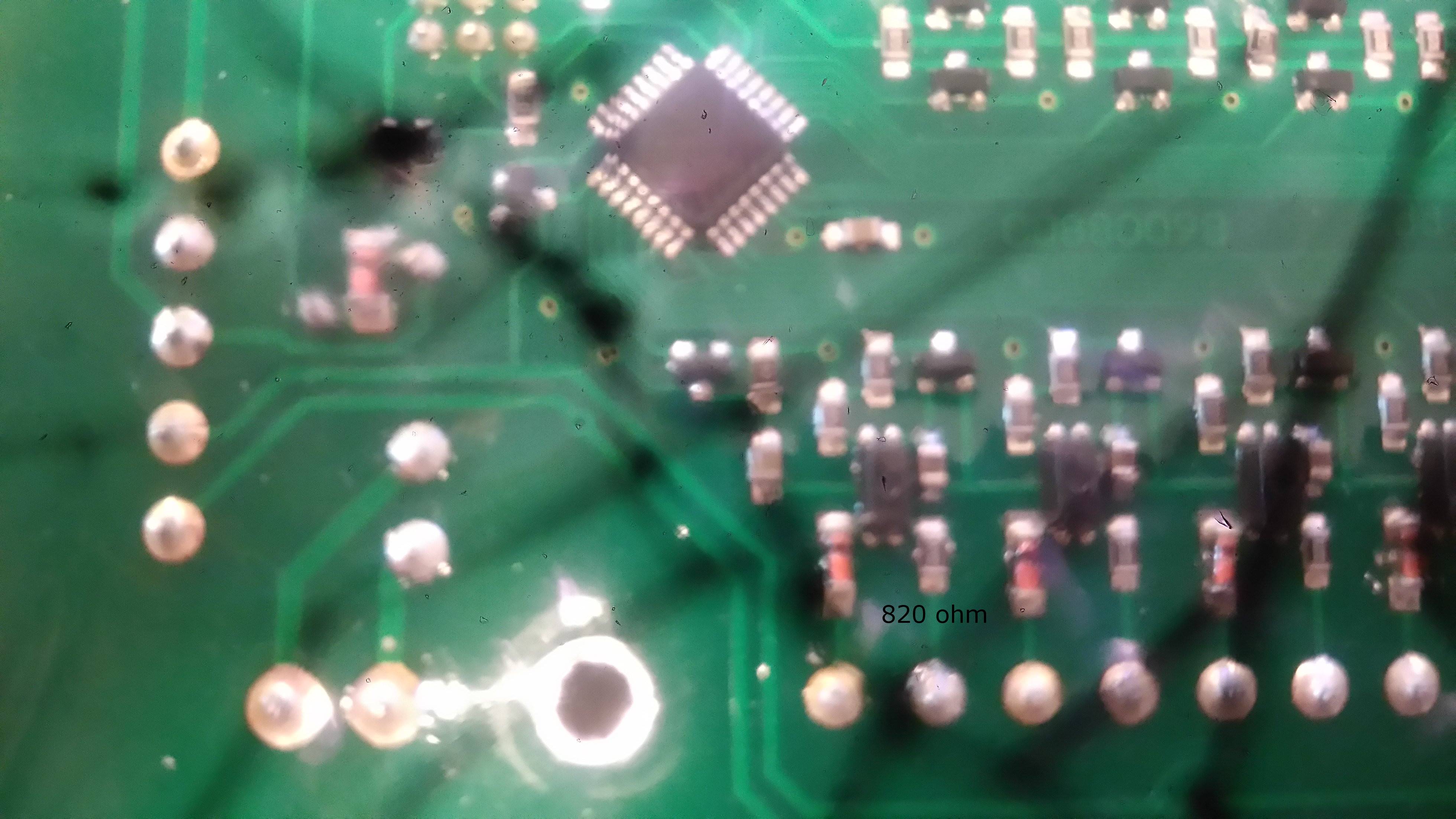 There are eight identical input circuits. I added the text "820 ohm" below one of the resistors. To the left of this resistor is the diode, above and to the left is the opto-isolator. It is a 4 pin device with SMD code 824.

Very close-up view of the resistor in question: 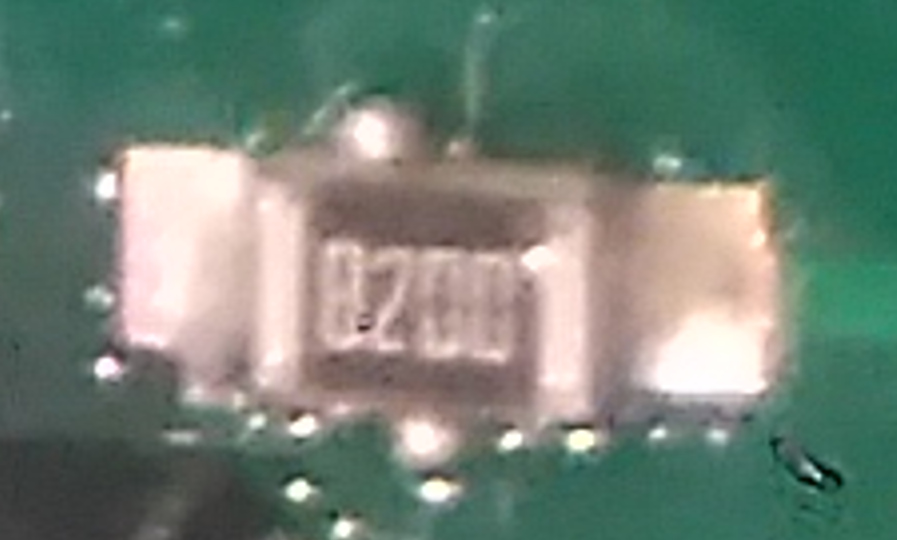 From the data you provide, this indeed seems like a bad design. I also get about 600 mW dissipation in R1 in the circuit you show.

The fact that the resistor is getting really hot is direct evidence that it is dissipating significant power for its size, but not necessarily too much. Resistors can run indefinitely without harm at temperatures that would burn your finger. A finger test doesn't really tell you whether it is dissipating just within the limit, or over it.

One possibility is that the circuit isn't as you show. Perhaps there is something else going on that isn't easily visible from the outside of the board. A good test would be to measure the actual voltage across the resistor. That together with the label on the resistor will give you a definitive answer to how much power it is dissipating.

The power dissipated by a resistor is the square of the voltage across it divided by the resistance. In common units,

Therefore, the voltage that causes a particular dissipation is

If the resistor is really 820 Ω, is really only good for 125 mW, and has more than 10 V on it, then yes, this is a flawed design. From the data you've given us, these premises seem to be true.

If it turns out the resistor really is overloaded, then probably what happened is that the unit was originally designed for a lower voltage. Somebody realized they were missing too much of the market by not supporting higher voltage. Whoever was supposed to check this in engineering either didn't, was generally incompetent, or just missed this one.

While you definitely don't want to use this product (again, assuming things really are as you say), The device is very unlikely to catch on fire as a result. Such overloaded resistors will usually just burn out and fail open. There isn't enough flammable stuff around to cause a fire. However, the resistor could burn out and open before the fire fighters arrive, giving them wrong information as to where the fire is. That's the real danger of this system. Or, the system could latch the information until manually reset, so there are no symptoms during the first incident. However, now that channel is broken and won't respond to future fires in that zone. That's obviously really bad too.

Do the voltage measurement and point out your concern to the manufacturer. It might be worth hearing what they have to say, but it would have to be something really good for me to ever trust their products again. Remember that with electrical engineers, just like with any large group of people, there are really good ones at the top end, the decent-enough majority in the middle, and incompetents at the bottom. There are certainly incompetently designed products out there. You may have found one.

Well, you're kind of guessing on a lot of things, yet you seem very sure that an 0805 resistor, which you think these are, is rated for 125mW.

There are 1W-rated (at 70°C) 0805 resistors. Of course they will run very hot, but they are designed to do that. In the value you have, it's more likely to be 500mW maximum at 70°C. Or perhaps lower rated, but there would be no visible difference.

I would not personally feel comfortable in this particular situation running parts even near their printed specification, but in fact surface mount parts are very sensitive to the PCB details- from tests a very small part can dissipate a lot of power (similar to a much larger part) if mounted over a ground plane. A very large part on a single sided board with thin traces might run hotter than an 0603 part with fat leads, a ground plane etc.

I don't see any redundancy in this circuit so any kind of single point failure- the opto, the wires to the unit, the resistor, the diode could cause failure to recognize the signalling so this is not being treated as a safety-critical device design in the slightest.

(Edit: I do have one suggestion- that you confirm that the input is actually rated at 24V DC. The power dissipation with 24VAC would be about half what it is with 24VDC input.- okay you covered this in a comment)

On the other side of the equation, if the voltage in question is coming from a backup battery bank the '24VDC' might be more like 28VDC which would increase the power dissipation considerably- to more than 850mW. The resistors are close to each other so they will heat each other up.

Do raise this with the supplier.

This type of resistor is not designed for long term overload (indeed, none are), but the effect of overstressing the part thermally (via too much power) is to change the resistance down in the initial phase:

In this type of circuit, where the forward voltage of the LED and diode will not change significantly for changes in current (for a silicon diode it is 60mV per decade of current), that will increase the current in the circuit with close to constant voltage across the resistor during this period leading to more heat in the part. This could conceivably cause a thermal runaway.

Whether it will burn out or not is unknown (but highly likely if it is subjected to this sort of overload continuously), but it will definitely have a shorter than stated life (normally stated at 25C although some endurance ratings are at rated temperature); indeed, raising the temperature of a device to deliberately induce failures is a common test for manufacturers as the failure rate increases exponentially with increasing temperature.

This process is used by manufacturers to predict the useful life of components using the Arrhenius equation in many cases by deliberately causing early failures at elevated temperatures. This leads to a predictable life of the component at more benign conditions.

I thoroughly agree with Olin that you should reject these units as the reliability of the unit is guaranteed to be low at the extremes of voltage specified by the supplier, even if they survive the overload.

A proper design will never permit overstress of a part although there are parts deliberately designed to withstand short term pulse events and are often found in ESD and lightning protection circuits.

[Update] It is possible, as Supercat comments, that this is a PTC, such as this series

This shows that this circuit must not be used with open collector input drivers!

Not the answer you're looking for? Browse other questions tagged resistors maximum-ratings power-dissipation dissipation or ask your own question.