How to stop plastic granules sticking to the iron wall of their silo?

In our factory, we have some large (8 meters tall and 3 meters in diameters) iron silos for storing the plastic compounding material. Every time the silos are getting unloaded from the granules, the plastic powders stick to the inner metal layer due to the static electricity, so that the operator needs to knock on the wall severely in order to make them fall. I want to know:

1- How can I instantly make this static load discharged and get rid of this problem (Right now, the resistance value between the earth system and Null is almost 0.03 Ohm) I would appreciate if you mention the standards and the detailed answers.

2- How can I measure the quality of the grounding system and what would be the standard range of this value?

If your plastic pellets are getting charged, you can flood the inside of the silo with ionized air using a commercial generator. These are not uncommon in the plastics industry. 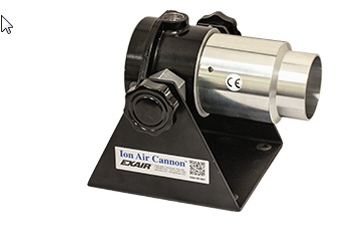 You can't easily do what you ask since the problem is charge gets built up on the plastic particles. Since they are all enclosed in one uniform conductor, it won't matter what the voltage of this conductor (the tank wall) is. There will still be charges on the plastic particles relative to the tank wall. Changing the voltage of the tank wall will only effect the electric fields between the tank and the ground and other things outside the tank. It won't do anything to the electric field inside the tank.

If you really wanted to counter the attractive force between the plastic particles and the metal wall, you'd have to introduce a different conductor into the tank and drive it with a voltage relative to the tank wall. One polarity will drive the particles more towards the wall, and the other will drive them away from the wall. Experimentation is the easiest way to find the right polarity.

However, even if you put a narrow cylinder in the middle of the tank and drove it with the appropriate voltage so that the particles fly off the wall, you'll have the same problem as now they'll be stuck to the center cylinder.

A different strategy would be to reduce the charges built up on the plastic particles in the first place. Plastic can shed or grab electrons as it is rubbed against other material. This is exactly what is happening as the tank is drained. Since the plastic is a good insulator, those charges stay on the particles for a long time.

The first possibility that comes to mind is to increase the humidity in the tank during draining operations. The plastic still sheds or grabs electrons, but the humidity makes surfaces a little more conductive so that these charges bleed off faster. Whether adding humidity is feasible, and whether it decreases the charge bleed time sufficiently is something you have do decide.

There are also various chemicals that essentially coat surfaces with something at least a little conductive. Again, whether you can tolerate those is something you have to decide.

Plastics have the tendency of giving up or collecting electrons (depends on the kind of plastic) and become positively or negatively charged. If this charge is disturbing a proces then you need to treat the plastic by adding surface conductivity thereby preventing this kind of behaviour. Such an additive could be moisture or anti-static spray. Such an anti-static spray is often made up from a soap based material dilluted in a solvent (mild alcohol). A fire retardant is then added to combat flammability. The plastic has now become conductive and as long as the coating is not disturbed it will be difficult to generate static electricity in this material.

If additives in whatever form are not possible then it might be a solution to make the plastics adhere to a place where the unloading of the silo takes place. In that case you are not changeing the plastics and even make use of the fact that they are charged. I would have to see more for further assistance.

What about if a metal rod was added to the centre of the tank? If that rod was charged with an AC potential, that went both below and above the outer wall's ground potential, then you may get what you are looking for. Not very much - I'm not trying to electrocute anyone - but if the attractive force changed between the tank and the rod then the plastic would in turn be attracted to the tank wall and the rod. Given the dimensions involved, it woudn't take long for gravity to win overall, and have the plastic fall to the output feed.

Ionized air seems to be the best solution to your problem. Moisture is verboten for plastic moulding granules and chemical additives, ammonium acetate in alcohol, as used in many anti static sprays would not be tolerated also, fire risk, etc. Delivery of ionized air into silo during discharge may have some issues, pellet dispersal, ozone production etc. Further thought. Recirculating portion of pellet discharge through deionizer and back into hopper would reduce problems with ecessive ozone and reduce amount of ionization required during discharge process.

Not the answer you're looking for? Browse other questions tagged earth electricity grounding plastic static-electricity or ask your own question.

3
Are stand-offs unnecessary when the case is made of plastic?
0
How does earth ground complete the circuit?
0
How to assess the risk of touching a live wire
0
Is this soldering iron and power supply combo grounded and if so, how?
1
How to calculate the 3dB point?
0
How can I ground the external shield of the USB cable?