I've done a simple H Bridge with 5V relays and 2N2222A transistors using Arduino Nano, just like this one: 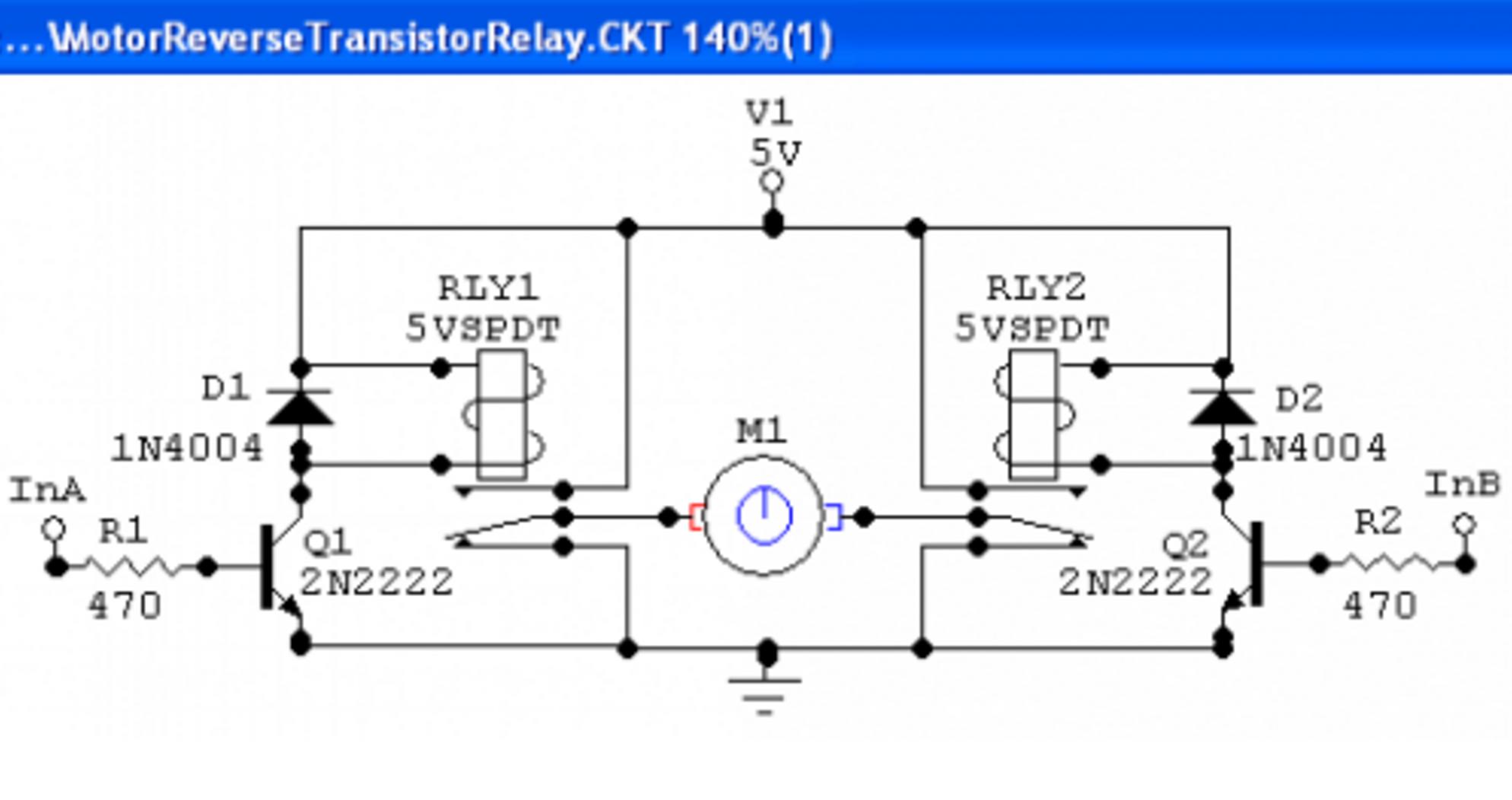 A 6V 4A battery supplies the Arduino (on Vin). Relays are supplied with 5V of the Arduino, but the Normally Open Contacts are connected to 6V.

When I connect just one DC motor, the H Bridge works fine. But If I want to connect two motors in parallel to the Common Pins, the relay I'm activating sounds, but the motors don't move, then, after some seconds, the Arduino restarts itself (because the Bluetooth module that I'm using disconnects itself and the LED of the Arduino blinks like when you reset it).

Also, if I connect the second motor in parallel while the first one is moving, it works fine, but then, if I try to invert direction, it happens what I said before: Arduino restarts itself.

The torque output of an electric motor is directly proportional to the motor current, and the current (I) is roughly equal to

Where V is the motor supply voltage, R is the winding resistance and ε is the back-electromotive force (back EMF).

The back EMF is the voltage that would be present at the motor terminals without anything being connected. It is produced by the motor acting as a generator, if you will, and it's proportional to the rotation speed.

If you connect an unloaded motor to a power supply, it will speed up until the back EMF exactly cancels out the supply voltage and then spin at a constant speed. If torque is demanded from the motor (even just the slight friction of spinning), it reaches a speed where the winding resistance lets just enough current to flow to balance any torque.

When you first switch your motor on, the speed is zero. This means that the back EMF is also zero, so the only things limiting the motor current are the winding resistance and the supply voltage. A motor which is rated for 500 mA and draws 50 mA without any load at 6 V might very briefly draw several amps of current when first switched on.

Apparently your setup somehow manages to supply this inrush current of one motor, but two motors starting at the same time draw so much current that the supply voltage drops below the level required by the arduino to function, causing it to reset and release the relay.

You need to limit the current draw of your motor when it first starts up so that the voltage stays stable. There are several ways to do this:

There are many issues here. A 6v-nominal battery is insufficient for the Vin of a typical Arduino, as the regulator has a high drop-out voltage. And as it discharges or is loaded, the battery voltage will only get lower.

Additionally, the dropout voltage of most regulators increases the more current they have to supply. And you should really not be running relay coils off of the Arduino's regulator to begin with.

Of course adding a second motor in parallel only increases the battery sag.

What current do your motors typically require? If not too high, you might consider a modern FET bridge like a TB6612FNG - that will be quieter, give you unique control of each motor, and let you use PWM to modulate the drive, too.

Not the answer you're looking for? Browse other questions tagged arduino h-bridge or ask your own question.

0
Why can't I drive more than one H-Bridge unless all other output pins are in Hi-Z state?

3
H-bridge output voltage
5
How to resolve this :Arduino UNO not working with Arduino wifi shield?
2
H-Bridge motor with Arduino
0
Arduino Nano + HC-05 AT not working
2
2 DC motors connected in parallel to H-bridge move with different speed
0
Transistor 2N2222A wont accept base input from arduino
0
Why can't I drive more than one H-Bridge unless all other output pins are in Hi-Z state?
1
Power Arduino with energizer power bank