Why don't electrons get repelled by the negative side of the the voltage drop across a resistor? [closed]

We can clearly see that the electrons are moving from negative side of the voltage drop across the resistor but why are not they repelled by that side? 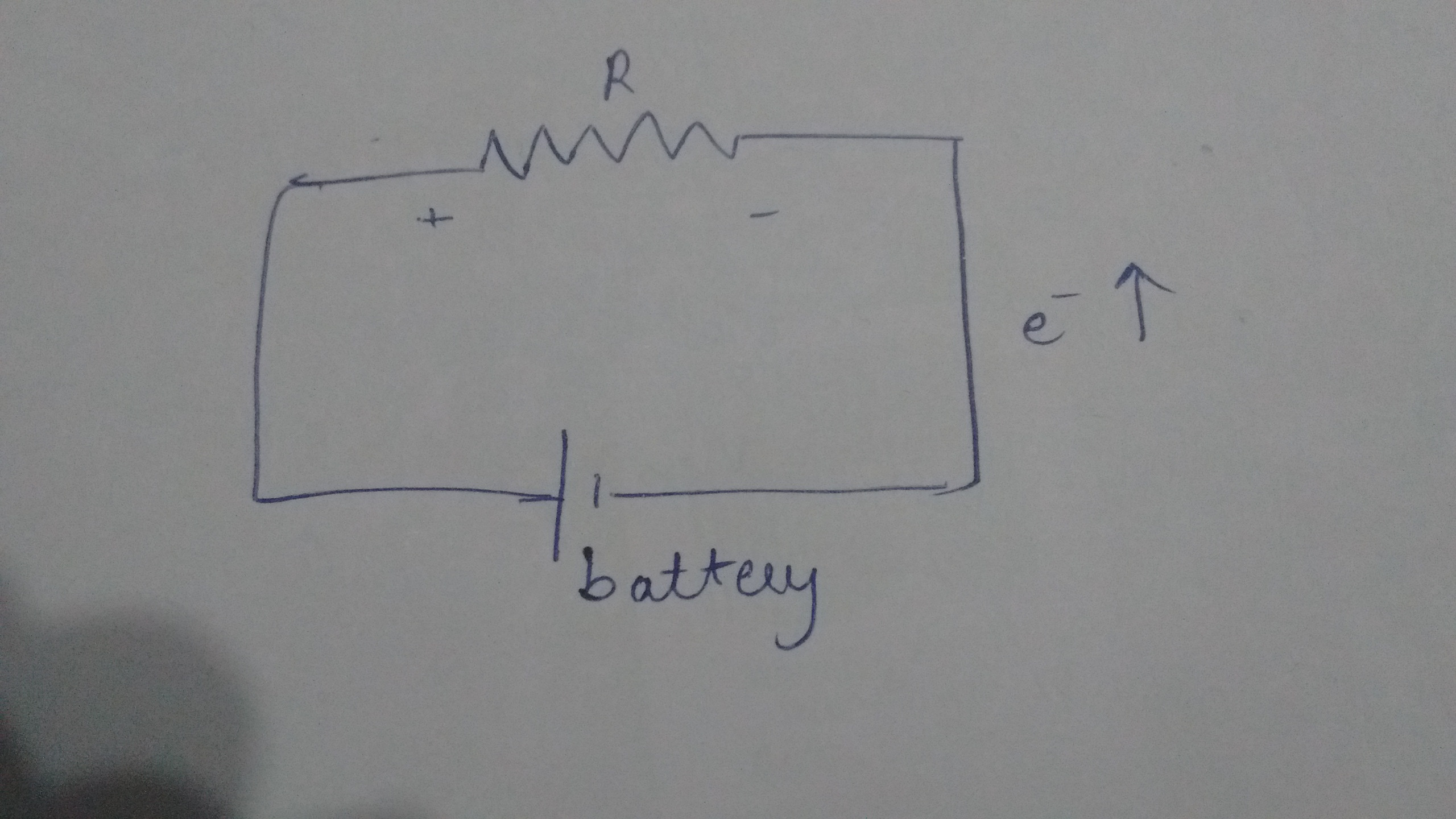 I really wish instructors would discuss the flow of energy before trying to talk about electrons, it just leads to this kind of confusion. Such as,

These are the kind of questions that crop up when someone tries to understand basic electric circuits in terms of what electrons are doing, without really having a firm understanding of what an electron is or how it behaves. The student is left to try to fill in the gaps with what they know, guessing that electrons might behave like tiny billiard balls, but that only leads to more confusion. Nothing else in nature behaves quite like electricity, and trying to understand the small-scale physics gets very hard to describe. So you're left climbing a wobbly ladder of half-truths...

Clearly there's not actually a great clump of electrons piling up anywhere, nor are electrons leaking out. A better way to describe what's happening, is that energy is flowing out of the battery until the battery is discharged (dead), and it's that flow of energy that pushes the electrons around. The energy flows out of the battery into the circuit, so then there must be energy flowing out of the circuit somehow - otherwise the flow of energy would not be possible. And this is what the resistor does: the resistor lets energy escape in the form of heat.

So the energy stored in the battery's chemistry, gets discharged as electrical energy, flowing through the circuit, and escapes through the resistor as heat.

Now what if you partition that single resistor into several resistors in series (adding up to the same total resistance value). Each resistor radiates a bit less heat energy, but the same amount of energy is discharged from the battery. So each of the resistors lets out a little bit of the energy. And this loss of energy appears in the circuit parameters as a voltage difference (sometimes informally called a voltage drop).

So what are electrons? Electrons are the stuff that is on the outside of every atom, and at very small scales they are attracted to the inside of the atom. (Why don't the electrons just smack into the protons at the center of the atom? Apparently, another force keeps them a safe distance away, effective only at super small distances.) Electrons repel other electrons, which is why higher atomic number elements are physically larger: the electrons need more space to spread out. And electron repulsion is also the reason solid matter is solid - the electron repulsion between your shoes' electrons and the floor's electrons, is greater than the force of gravity. If gravity wasn't weaker, then everything would be crushed into a single point. For electrical current, we're not as interested in electrons that are "attached" to an atom, but rather electrons that are temporarily "free" and moving from one atom to another. It might not be the same electron that goes around the loop. We can't tell, since there's no way to mark an electron. But we can say that a "free" electron is free because it is carrying some little packet of energy. You can even think of an electron as a little parcel of energy in transit from one place to another. (This is kind of a lie too, but it's much closer to the truth than the billiard ball thing.) The more energy that free electron is carrying, the higher its voltage. And the faster those waves of free electrons are moving that energy (on average), the higher the current. (Er um conventional current flow is the opposite direction that the electrons are migrating, because Ben Franklin couldn't see which direction the charge carriers were going, and guessed wrong. Sorry, that makes it even more confusing at the electron level.)

So the negative side of the voltage drop across the resistor, is only negative because that's the side where the electrons are carrying the most energy. The free electrons are still repelled from all the other atoms around them, because all of those atoms are full or nearly full of electrons already. But eventually the free electron has to land somewhere, anyplace its attraction to an atomic nucleus is greater than its repulsion from all the other electrons. And when it does land, it gives up the parcel of energy that was making it move. So another electron, maybe on the other side of the atom, gets ejected, or maybe a photon is released (as light or heat).

Heat loss is voltage x current, algebraic, and remember that a negative number multiplied by a negative number, is a positive number. So yes, the conventional current flow is backwards from the electron migration flow, but that just means the current is "negative", and the heat loss is positive.

Altough all the other answers are correct and full of other very useful notions about the electric behaviour of electrons and electric circuits (I suggest anyone to read them), I believe that the answer to the question can be expressed in easier terms:

the "negative side" of the resistor doesn't repel the flowing electrons for the simple fact that it isn't actually negative, meaning that it is not polarized, no negative charge sticks on that resistor's side (this would make it to repel electrons). Putting a "positive" and a "negative" side on components such as resistors is only a way to show the direction of the flowing current or, more rigorously, how the voltage changes (drops) across that component, the changing of which is due to the energy dissipated by the resistor (as mentioned in the other answers).

Just think of a voltage supply or battery as providing a field effect -- a voltage difference. A volt is a Joule per Coulomb. Think of it like an accelerating force field. If you set up two plates of metal in outer space (perfect vacuum) and set up one volt of potential difference between them, then if you released a full Coulomb of negative charge near the (-) plate (relative to the other one) that group of electrons (or negatively charged ions) would accelerate towards the (+) plate. When they struck the plate at the end of their travel, there would be one Joule of impact energy.

It's independent of distance. Cool.

So, now just think about a voltage source as setting up a potential difference -- a force field. You can measure it as volts per meter if the material in between is of uniform resistance per unit distance. You can also think of resistance as being directly related to the mean free distance that electrons reach before they impact an atom and stop, before accelerating up to speed again and running into the next atom. (It's also related to just how densely these mobile electrons are and the cross-section area under discussion since, obviously, if you have a lot of cross section area and they are densely packed then all of those charges will be accelerated together and there will be more resulting current.) The voltage accelerates these electron charges, which increase their velocity and then soon after run into an atom, dispelling their energy into lattice vibrations (heat), and then accelerate back up in velocity again.

The materials are all uniformly neutral, though. Even though charges are moving, they do not tend to pile up (except for capacitors which are designed to allow some small accumulations to occur.)

Not the answer you're looking for? Browse other questions tagged electromagnetism electricity or ask your own question.

-2
Batteries in series and parallel, voltage and current

5
Why can't electrons leave the surface of a conductor?
1
In an electrical circuit, why does the charge move after it passes through the last resistor, when it's voltage is zero?
1
At t=0 the voltage across the Inductor will immediately jump to battery voltage. Why?
2
How do electrons carry energy
0
Circuit direction of flow according to tutorial
0
Is there any difference between voltage drop and voltage across a component?
43
Why don't electrons take the shorter path in coils?