(LM2902N based) Variable gain for a Instrumentation amplifier

I'm trying to build a Instrumentation amplifier that would do a 10uV -> 10mV amplification. The motivation is to measure uA currents on a small enough shunt resistor (1-10Ohm).

For a proof of concept, I've built a circuit like the one below (ref.) with a distinction that I'm powering it with two 9V batteries and am using LM2902N as the op amps and Rg is somewhat different. It has much less that the required 1000x gain. 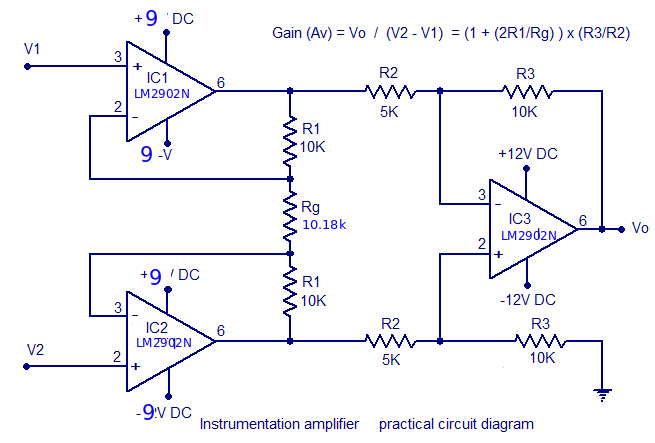 However, when measuring the results for different input voltages, the gain seems to vary: 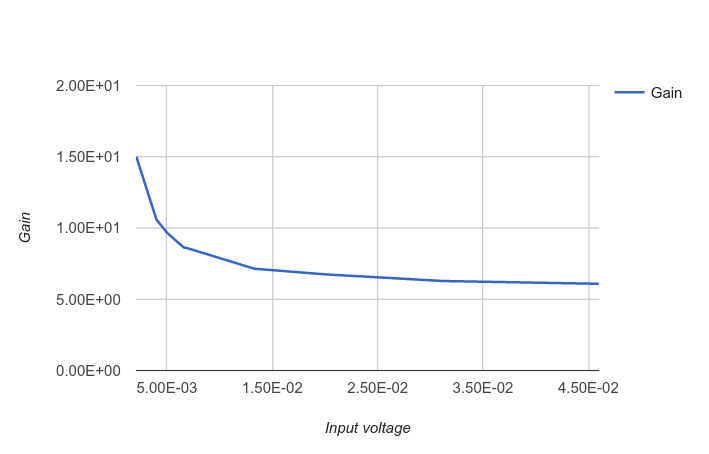 I was expecting it to be constant.

There are 2 obvious possibilities for falling "gain" with increasing input level :

What you expect:
Vout = Vin * gain
And you are calculating gain as Gain = Vout/Vin

This is a serious issue : it looks like you are attempting to amplify microvolts of DC with a device with millivolts of input offset voltage. This offset voltage is an error signal that will swamp the signal of interest.

What bandwidth do you need, and have you looked at chopper stabilised opamps to eliminate DC offset?

One opamp that may be useful to you is the ADA4528 which is further described in this Q&A which claims an offset voltage of only 2.5 uV.

Not the answer you're looking for? Browse other questions tagged operational-amplifier instrumentation-amplifier preamp non-linear or ask your own question.

1
What is the benefit of using carrier frequency for an amplifier?