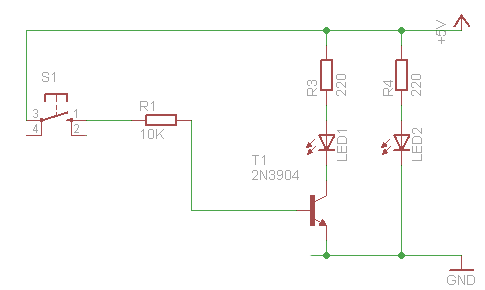 I see you have several answers, but they are mostly off the mark. You are NOT seeing a drop on the LED due to leakage of the transistor. Adding a resistor to ground on the base won't fix anything since you essentially already have that between R1 and R2. These transistors do have a small amount of leakage with the base held at 0V, but again, that's now what you are seeing.

What you are seeing is the voltmeter acting like a resistor, which pulls down on the LED cathode enough to get the little bit of current it requires. LEDs are diodes, so the current at a function of voltage is quite nonlinear. With the voltmeter providing a small current path to ground, the LED forward voltage is apparently 1.55V. It is probably at 2V or so when really on. 1.55V is plausible to support the few µA or even nA that the voltmeter draws.

To prove this point, use the same voltmeter to measure between the LED cathode and the 5V supply. If the circuit causing the apparent voltage drop on the LED, you should now read about 1.5V. I predict you will read essentially 0V. That is because now there is no current path thru the LED to ground.

The LED cathode is a very high impedance node with the switch is open. So high that the voltmeter significantly effects the circuit.

The 3.4V indicates that there's a tiny leakage current into the collector when the transistor is off. The 1.6V drop is across the LED. If there's no collector current at all the collector voltage should be close to 5V.
One way to accomplish this is to use a pull-down resistor on the base, like clabaccico suggests. The more common placement of the 1M\$\Omega\$ resistor is directly on the base, however. The resistor has a rather high value here, but the way clabacchio placed it it's parallel to the 100\$\Omega\$ resistor and is an extra load when the switch is closed. Placing it after the 100\$\Omega\$ resistor it's in series. I would pick 1k\$\Omega\$ for the series resistor and 10k\$\Omega\$ for the one to ground. That will give you a base current around 4mA, which is high enough for about any low-signal transistor; for a 20mA LED current you would only need an \$H_{FE}\$ of 5 (even a 2n3055 can do that!). Anything higher is OK, and most small-signal transistors will have an \$H_{FE}\$ of at least 100.
If the switch is off the 10k\$\Omega\$ resistor will make sure the base is at 0V and there's no collector current.

The 73mV saturation voltage is actually very good, but not impossible.

If you are reading 0V across the resistor and 3mV across the LED with the switch open, where is the ~1.6V drop coming from?
EDIT - I think Olin is right about your multimeter causing the LED drop. Since an LED is very high impedance below it's Vf it will only take a tiny bit of current to cause a drop.

To test this I just set my bench supply to 5V, grabbed a standard 5mm red LED and connected the positive lead to anode, then put my digital multimeter in series between the cathode and the negative lead.
The reading was 3.76V, which proves it to be the multimeter (well in my case at least) causing enough current to flow to drop voltage across the LED.

2
Transistor selection for 5V LED circuit
1
Why is there voltage out of the gate of my transitor
3
Strange LED behaviour
0
NPN Transistor circuit not functioning
4
Solving the time constant in this specific circuit
0
Circuit works with BC557 PNP transistor, but not TIP32C?
0
How does this transistor NOT gate work?
17
Why isn't the current split between the transistor and the LED in this NOT transistor circuit?