I've read various posts regarding differential voltage measurements. I'm confused as to why it seems virtually impossible to measure differential voltages that are high relative to ground (like differential between 251V vs 249V) and feed that value to a microcontroller. The challenge appears to be due to the fact that the A/D chips have limits of the voltage you can apply relative to the Vcc. It becomes more complicated if you want to multiplex various differential measurements to the microcontroller. I've seen various discussions on this topic and no compelling methods, but every handheld battery powered digital multimeter appears capable of performing the function with the exception of the data transfer to the microcontroller. Does anyone know how the multimeters acheive this?

If you have a floating supply (battery) then there are no absolute or earth ground stresses of offsets or common mode voltage issues to deal with.

The usual limitation is that the signal must be inside the supply voltage rails or even inside 2V away from the rails. Some are design to work a bit below ground (PNP inputs) or above V+ rail somewhat (NPN inputs) but not likely 250V above the supply voltage to the chip. ( but possible at higher expense.)

It is possible however to design a custom solution to perform this task in a ground referenced system or use a positive supply reference with a small negative rail, or AC couple or attenuate within the supply range , then amplify the difference. There is one chip I know with ADC with (DC isolated) differential inputs for high voltage measurements.

This works due to 20:1 reduction of input signals with precision matched R's. 77 dB minimum CMRR @ 500 Hz 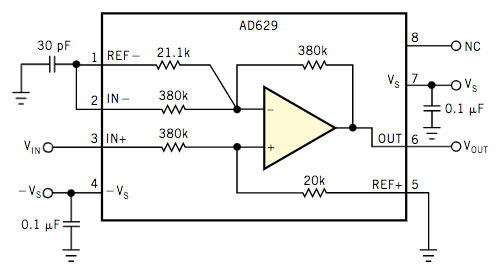 To ground-reference and subtract two signals that are very close to each other is difficult because you are basically subtracting two large numbers to get a much smaller difference.

Now if you can subtract the two voltages before either shifting to ground or using a galvanically isolated circuit it becomes relatively easy to get high accuracy.

Multimeters are galvanically isolated. They don't know what the voltage is on their inputs with respect to ground- all they know is the difference between the input terminals (this has some complications with AC inputs). You can do the same thing as a voltmeter by (for example) using a DC-DC converter to power a circuit sitting on the 249V input and then subtract the 251V and transmit the difference to ground. It could be digitized and sent serially, or level-shifted with an analog current source, for example.

In fact, using that method it's possible to measure voltage differences that are millivolts or even lower, even when sitting on top of hundreds of volts- or even much, much higher voltages.

Not the answer you're looking for? Browse other questions tagged voltage differential or ask your own question.