Op Amp analysis at the output

Why is it generally a bad idea to formulate node voltage equations for an op amp circuit at the op amps output? Does this idea only apply in the ideal op amp model?

I recall it has to do with the idealized zero output impedance of an op amp, and maybe I'm just not understanding the consequences of this, but why does this mess up the analysis? I would really like to get a better understanding of what I can and can't do when playing with different network layouts that utilize op amps. As of now when I write out a possible op amp configuration I am wary of my design because of this ambiguity in where the analysis starts to become wrong. A cascaded op amp design is even worse because I do not know where to even start.

I guess the greater question is:

What is unique about the op amps network topology and/or variable relations that may lead to inconsistent equations? That is, what do i need to look out for while forming equations pertaining to a given (ideal) op amp model?

EDIT: I realize this is a rather broad question, so I added an pic/example of a situation where the analysis leads to a contradiction.this is just the simplest case of what im talking about. In general I find eqns formed at an op amps output tend to lead me to wrong answers.
I have an introductory textbook for circuit analysis that specifically tells me not to formulate node equations at OP AMP output nodes but does not expand on why. I find it hard to gain confidence in working with op amp equations when a underlying contradiction might pop out of nowhere.

This was already mentioned by Russel, but I hope to present it in a different way.

The main problem here, it seems to me, is that your book (or whatever source of information you're using) missed one important point: The voltage between inverting and non-inverting inputs of an ideal operational amplifier should always be zero with this and similar setups. If we include that assumption and take a look at the circuit, we can get a logical answer.

As I said, the voltage source is ideal, so it can source infinite current, it's controlled so you have your gain, the current is set by resistor and there's no contradiction there at all. In reality, the current will come from the power supply pins and be limited by construction of the operational amplifier, but this is a mathematical model. So let's take a look at a pretty pictures now:

The first image may seem a bit drastic: 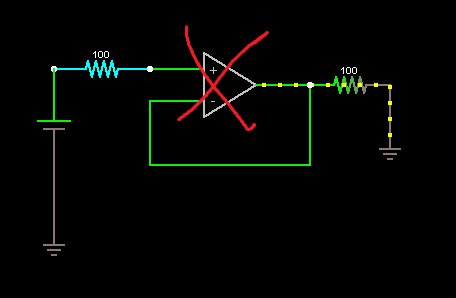 I've crossed out the op-amp on purpose here. It seems to me that trees are obstructing your view of the forest here. If we remove the op-amp symbol and take a look at how we're supposed to model it instead (note the \$ 100 \mbox{ }G \Omega \$ resistor): 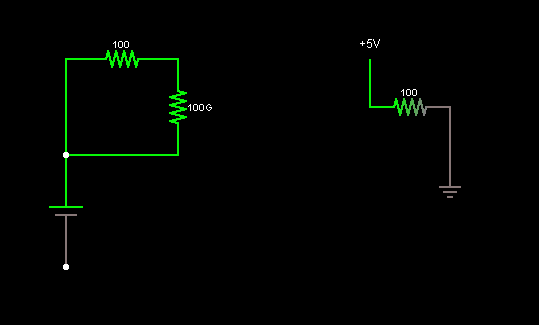 We can clearly see that the current is coming from the one terminal voltage source which is the output of the op-amp.

Next, I'll show a bit more complex version of the same circuit and explain how it degenerates into what you've shown: 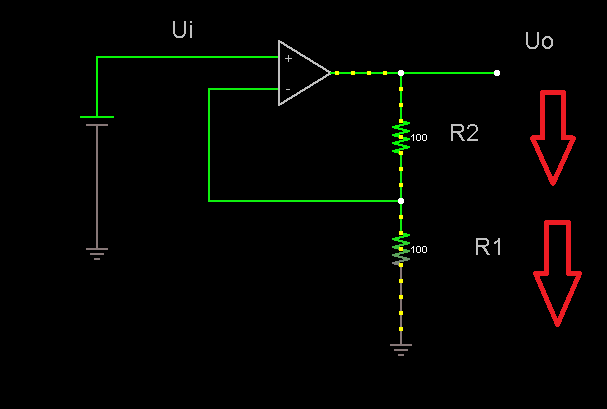 Let's see what we can see here:

With the few assumptions I've shown and few equations, you can do basic op-amp circuits without any problems. I recommend that you read from freely downloadable books Amplifiers and Bits: An Introduction to Selecting Amplifiers for Data Converters pages 6 and 7 and from Op Amps for Everyone Design Guide chapter 3 (or at least take a good look at the pictures there). Both books (well, a book and an application report) are by Texas Instruments (a major op-amp manufacturer) and should come up on most popular search engines as the first response.

If the opamp is ideal, the inputs draw no current. If this ideal opamp is configured as a unity-gain follower, and you have a voltage source with a series resistor connected to the non-inverting input, then the current through that resistor will be zero. Still assuming the opamp is ideal, the current through the load resistor will be the applied voltage divided by the value of the load resistor.

Again, there is no input current to the non-inverting input with an ideal opamp in the configuration you describe. The current through the load resistor doesn't come from the input, it comes from the power supply.

If you Work on the principle that if you get contradictions it means that your assumption set is wrong or your understanding is wrong it will allow you to work on finding out what is wrong.

An ideal op amp has

A real world opamp deviates from these ideals in various ways and it's up to the manufacturer to decide what those deviations are and up to the user to understand how they affect any design it is used in.

One implication of infinite gain and zero input impedance is that when connected in a negative feedback arrangement (as here) it will have zero differential voltage between inverting and non inverting inputs. Even when using a non-ideal real world opamp in a circuit with negative feedback, if you can measure ANY voltage between inverting and non-inverting inputs with a typical bench meter then the opamp is probably wounded or dead. Input offset voltage will make this slightly non true, but usually only slightly)

Playing: To emulate a Tesla coil of arbitrarily large size, take an ideal opamp, ground both inputs, turn on power and disconnect either input from ground and touch it with your finger. Depending on the insulation resistance of the ideal case and the PCB it's on, you may or may not die and/or get engulfed in a ball of plasma. Dangerous things these ideal opamps.

Not the answer you're looking for? Browse other questions tagged operational-amplifier design or ask your own question.