Using a relay for retro clicky sound - how do I make it louder?

I'm building a battery operated retro device that I want to sound really clicky and old fashioned. I want to include the noisiest relay (sound noise not electric noise) possible in my project. Can anyone help me identify what characteristics are correlated with more noise? Actuation time? Release time? Weight? Amperage rating? or alterternatively recommend a relatively small relay that is known to be especially noisy? These relays are not intended for switching any loads. The usual google searches for relay and decibels or noise doesn't come up with anything useful.

I have considered using a turn signal but those devices are quite large.

Try using an inexpensive power relay such as the T90 series, and attach it to a resonator board which will act like the cone of a speaker. They draw about 1W each.

Since you're after an aesthetic effect you'll have to fiddle with it, I think.

Now if you really want buzzy clanky sounds, you can consider an AC powered "definite purpose contactor" as used in HVAC equipment which will be very noisy and retro sounding. They are not even that consistent in their sound (because of the AC power), which I suspect is useful in your application because they don't sound like a fake synthetic sound. You'll need something like an SSR or a small relay to control the contactor. They're huge and don't mount on PCBs.

You can get a similar effect (at less sound level) by feeding the DC relays with some kind of randomized power (such as a ramped sine or triangle wave started with random phase) to make them pull in less consistently. Again, you'll probably have to fiddle with it. You can consider the relay as a special kind of speaker with a really weird response (once they pull in and the magnetic circuit is closed the current has to be backed off a lot for anything much to happen). You could use the contacts to feed back the armature state to a micro. Use something related to your mains frequency such as 120Hz or 50Hz to get authentic mmm..buzz-click sounds. Lots of fun possibilities.

You might want to consider an auto starter solenoid. That is something you could get as salvage. If you want a big sound from something very small, you will need to reproduce the sound. 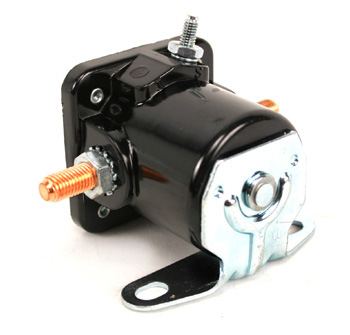 Consider using a "pinball knocker", essentially a solenoid that strikes the inside wall of a pinball cabinet (or a strike plate of its assembly) to make that rapid clacking/knocking sound an various points in the game.

Tuning the control of that solenoid and the object it is striking can get you anything from a rapid series of clacks to a single dull thud that you can feel.

It will probably be smaller, cheaper, and easier to implement to mimic the sound of a relay than to use a genuine relay. Relay actions only take a few 100 ms at most, even for really big klunky ones.

Even the sound simply recorded and played back thru a small PC mount speaker wouldn't take much memory. Let's be pessimistic and say you need 12 bit samples at 20 kHz sample rate (most likely 8 bit samples at 10 kHz is sufficient). That comes out to 30 kBytes/s, or 3 kBytes for 100 ms duration. You probably have a spare 3 kB of program memory in your microcontroller already. Even if not, upgrading to the next larger micro is going to be a lot cheaper, take less space, and require less power, than adding a relay.

A lot of relays may advertise how quiet they are. So you can check the datasheets for louder relays, or those that do not specifically advertise so. As an example see this datasheet: random relay datasheet

You can see that there are a few models

As a rule of thumb I would say that the higher current the relay can handle, the louder the click of the relay.

Also, you could hit the relay a bit harder when activating it: drive it with a higher input slope (stronger/faster driver).

Solenoids usually produce a loud click so use internally a solenoid that activates when any of the relays activate. The solenoid doesn't have to do anything useful of course.

for small relays here's 4.5V one that can be mounted glued to a panel to amplify the sound,that will,operate from a LiPo cell down to 3.1V

To make it buzz and stick and buzz when you hit it if it sticks... Use the above and wire the coil in series with 3.7V Lipo battery and NC ( ormally closed ) contacts and then it will buzz and vibrate albeit with some electrical noise... (don't touch contacts). As battery wears out in 10 hours. it will,buzz slower and slower until it sticks , you shake it and it buzzes some more. until battery is drained.

But for sound bytes... just put the mic in contact with the relay and record it. or record an A/C solenoid

At least as important as picking the right relay is the mechanical design of the part the relay is attached to.

In order to emitt sound efficiently you need acoustical impedance matching so the tiny (but strong) mechanical osciallation of the relays moves as much air as possible.

This can be accomplishged, e.g. by placing the relays onto a large board that is free to oscillate or the chassis of the device.

We regulary use an inexpensive 200mW relay to obtain the authentic click sound. In a plausible but futile experiment, we tried to shortly overpower the relay, connecting 5V coil to 24V supply. Unfortunately, the sound level was not noticeably increased. However, different relays behave very differently, so the choice of a right type is a key decision.

Not the answer you're looking for? Browse other questions tagged relay sourcing or ask your own question.