Good analogy for watts vs amps?

According to plumbing analogy I've hard time seeing why power is measured in volts*amps, instead of just amps.

I found an analogy from http://science.howstuffworks.com/environmental/energy/question501.htm

Electrical power is measured in watts. In an electrical system power (P) is equal to the voltage multiplied by the current.

This explanation contrasts two ways of increasing the power:

But increasing the pressure also increases the flow rate!? What am I missing here?

Would it be more precise to say that I can increase the power by:

Does increasing water pressure while reducing hose diameter (so that flow rate stays the same) really give you more powerful waterwheel?

The water analogy is full of leaks. A better analogy, if you need one, is a closed circuit water pumping system such as a central heating hot-water system. Pump = battery, pressure = voltage, radiators = resistors, current = current.

Forget all that for a moment: why does voltage affect power? Increasing the voltage allows us to get the same current through a higher resistance. Since more work is required to do this then the power must be increasing.

For a simple water analogy, if you double the pressure, the flow rate will double. This is based on the fluid "load" being equivalent to an electrical resistor.

So you've doubled pressure and accordingly, the flow rate has doubled and, this naturally and mathematically means the power imparted to the load has risen 4 times.

Nothing wrong with that analogy at all.

I recently plotted the energy in a screw air compressor ( 3 phase) and thought I would share for you.

So power, P=IV times time is Energy is equivalent to cumulative volume of air mass at a fairly constant velocity. (regulated by pressure and nozzle size)

Orange is CFM and light blue is kCFM-cum. BLUE is kWh and thin blue is PSI air pressure in the tank. 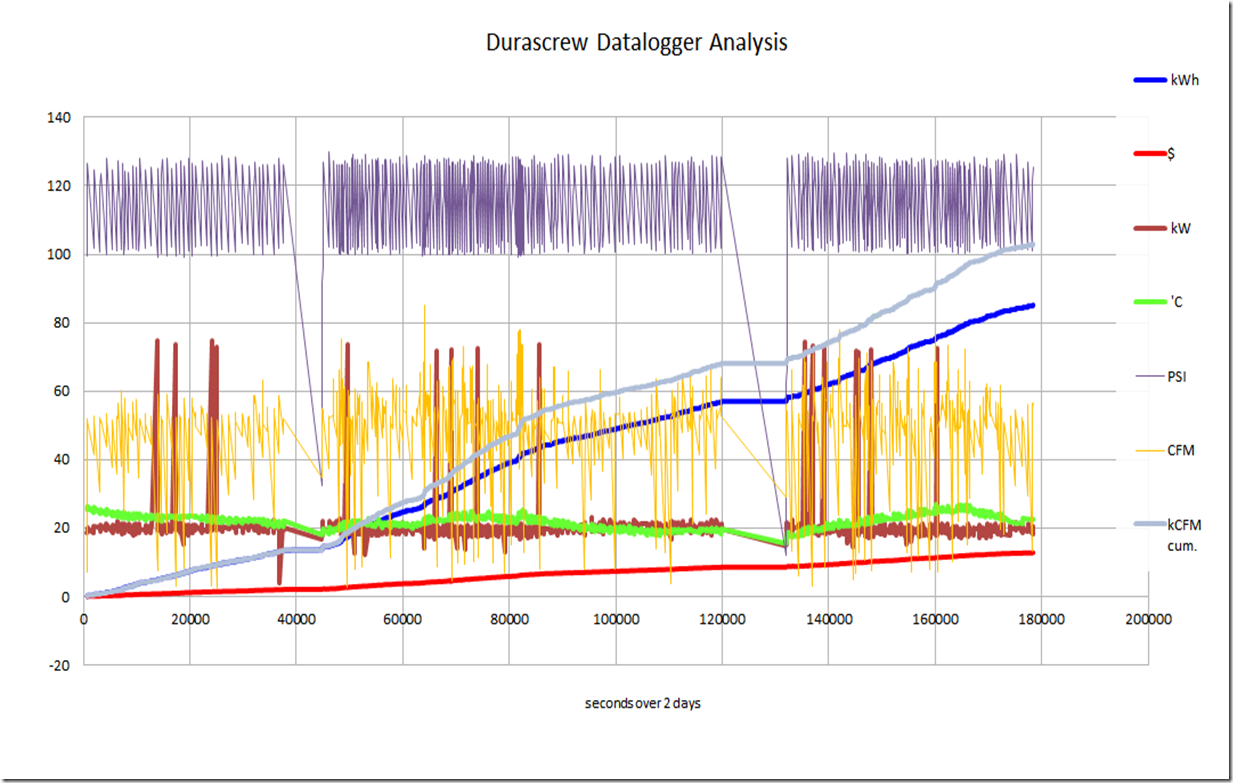 Not the answer you're looking for? Browse other questions tagged amperage basic watts or ask your own question.

2
Understanding Electrical Engineering with Analogies
4
Is it possible to make a complete analogy between electricity and something more graspable? (e.g. fluids)
0
Observing and exploring the relationship between current and potential with a USB multimeter
0
Does it make sense to only mention amp requirements and not voltage requirement, or vice versa?
0
Current Draw vs Voltage
1
How is the energy consumption of a ciruit component calculated?
0
Amperage and Voltage Question: The Water Pipe Analogy