Do a diode and a resistor in parallel have the same voltage across them?

Example attached. My intuition is telling me that they're the same because of Kirchhoff's laws.

I know that a constant voltage model exists but I was worried about the nonlinearity of the diode disqualifying basic KVL. 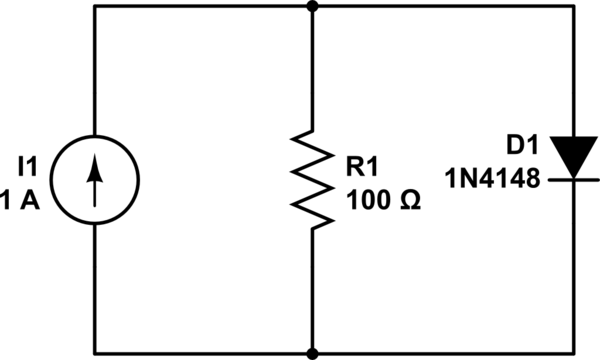 In your case, consider the bottom node as ground, or \$0\:\textrm{V}\$. Then the top node voltage will be determined by:

Solving this requires the product log function. If we set \$V_T=\tfrac{n k T}{q}\$, the adjusted thermal voltage for the diode, then it works out to something like:

Physics just works. The only problem with fancy, non-linear and/or differential and integral equations is that solving them with closed solutions can be difficult. But you can usually do what any Spice simulator does, and that is to "linearize" each equation over short times and operating conditions, take a small step from there using simple linear equation solution methods, then re-linearize things again, repeat, etc.

In this case, you might have just avoided all the garbage I did above. The voltage across this modeled diode (parameters as above), if it took up all the current, would be:

If we were serious about nailing down the last few decimal points of the voltage, \$V\$, then we could have just re-applied our new value for \$I_D\$ (which is only slightly different from the earlier assumption that the diode took all of the current) and recomputed:

And have completely nailed it.

This last approach is more how an engineer does this, when roughing out a design approach to something. They don't usually go off into mathematical never-never land to nail down the last decimal. Partly, this is because electronic parts are real, physical devices with variations and dwelling too much on exact numbers wastes time on minutia. Partly, this is because it's rarely necessary.

You do need to know, for example, that in the case you showed it is likely the diode will pick up most of the current. This is easily tested by imagining instead that all the current goes through the resistor (counter-case.) If that happened, you'd have \$100\:\textrm{V}\$ across the diode. So an engineer would go think oppositely, assuming all the current goes through the diode, and see what that looks like. Recognizing these patterns and quickly applying the more important ideas and rules to them in order to get a 1st order approximation of what is going on is the mark of an experienced engineer.

The only cases where tiny details matter are for physicists who are at the limits of current knowledge and trying to extend that knowledge and use devices in arcane and rarely considered ways; and are willing to invest years of their time to characterize details in order to pursue singular goals. For practical circuits made by the bucket loads, instead of carefully crafted one-off systems with thousands of man-hours invested in tweaking them, this kind of nuance just isn't in the cards.

There's no need to go to Kirchoff here. You have defined them to have the same potential. This is what you do when you connect them all to the same node, as you have done.

So by definition, they will have the same voltage across them. Even if you flip the diode, or connect various elements between the two nodes.

Not the answer you're looking for? Browse other questions tagged resistors diodes parallel or ask your own question.