So, for a diode circuit with a resistor and an inductor, I know that a diode in parallel is needed to provide current a path to travel if power is suddenly cut. But, what about RC, LC, and RLC circuits? Would they also need a flyback diode, or not? My thought is that if they have a capacitor, they shouldn't have a problem because the capacitor would store energy, but I'm not sure that's correct.

Parallel LC:Yes under the right circumstances. In a parallel LC circuit if you had a high DC current component flowing through a large inductor and a small capacitor when the power was disconnected you could see a destructive voltage spike. In effect all inductors are parallel LC circuits like this. There are stray capacitances everywhere. In cases where you have to worry about destructive spikes the the capacitance is small. The capacitance between the two inductor leads is usually picofarad level while the inductor is usually many turns around a ferrous core which leads to high inductance.

However when parallel LC circuits are designed instead of just happening because they can't be avoided, they are used to take of advantage of the fact that they can trade energy with each other. This means the capacitor should be able to absorb what the inductor can give it.

Series LC: there is ideally no DC component here. Capacitors don't allow DC voltage to flow and the leakage current is negligible here.

RLC: same for the same reasons for both parallel and series. In the parallel case the resistor even helps absorb the energy.

An inductor stores energy in a magnetic field. How much is stored at a moment is a function of instantaneous current: (1/2) * L(henries) * I(amps)^2 = energy (joules).

The easiest way to understand the spike is to start with observing that the current through an inductor must change in a continous manner. It can not jump from one value to another.

This can be understood by looking at power.
power = energy/time

If it jumps from one to another then the instantaneous power is infinite. This is not possible in our current understanding of physics.

So given that current cannot change instantaneously through an inductor if you have 1A flowing through an inductor and you disconnect it, then there will still be current flowing through it. As you approach the time of disconnection from the right the current will approach 1A. The voltage across an inductor as you approach the disconnection time will be whatever is necessary to cause 1A to flow. So if it is sitting in the air with it will cause an arc in the air. This is why cars have coils for their spark plugs. If the resistance between the terminals of the inductor is 100k ohms then the voltage will be 100kV. If there is a diode connected the right direction then it will be about .7V and the diode should be rated for handling the current. If there's an active component like an expensive chip somewhere it will reach the breakdown voltage if it has nowhere else to go and current will flow.

A capacitor has a similar model just with currents and voltages reversed. A capacitor stores energy in an electric field. How much energy is stored in the electrical field is

Similarly a discontinuity in the voltage over time implies infinite power at that moment and cannot happen. In a capacitor the rate of change in voltage is a function of current.

So if you have a parallel LC circuit with 1A going through the inductor and you disconnect it, then the voltage will be changing at 1/C volts per second. The larger the capacitance the slower the rise. The current will continuously decrease along with the rate of voltage increase. How fast is based on the size of the inductor.

You can get a feel for voltage rise using the conservation of energy. An example with 1A going through a 1mH inductor with a 1uF capacitor in parallel. Assuming steady state conditions the voltage across the capacitor will be 0 at the time of disconnection.

The energy in the magnetic field of the inductor is

The highest possible voltage rise in the capacitor would result from lossless components where all the energy is transferred to the capacitor.

So as a designer you would have to make sure anything that voltage could be applied to was rated for that(including the capacitor and inductor) or find a way to protect it.

Note that a 1mH inductor is pretty big compared to a 1uF capacitor. I can't think of a place where that would happen when it is being used as a LC tank for its resonance and would also have DC current going through it. A DC motor with a small capacitor across it to shunt noise from the brushes might be a place where something near this model happens.

An analogy would be a capacitor connected to a voltage source where the source could suddenly be shorted, causing huge current to flow.

In a similar, but complementary, manner to the inductor, a series diode or a series resistor (or parallel L-R in series) would prevent the current from reaching hazardous levels.

There is a bit of an apparent difference in that capacitors are generally much more ideal than non-superconducting inductors- an open capacitor could hold a charge for days, but a shorted inductor will not usually maintain a current for long due to resistance of the wire.

Yes, diodes are used in circuits to discharge energy stored on capacitors. It's an entirely different circumstance, though.

Inductors will reverse their voltage when discharging energy and if all their usual current paths are disabled or cut off, that voltage will rise rapidly until something gives in or breaks. Providing a diode (or a zener plus diode) provides a way manage the value of the inductor's reverse voltage.

In the case of capacitors, the reason for using diodes to discharge energy still exists but the situation is also a lot different then. They don't suddenly create huge voltages to manage. However, they often do need a path to discharge when used in switching circuits.

Here's an example modified from a post I recently made: 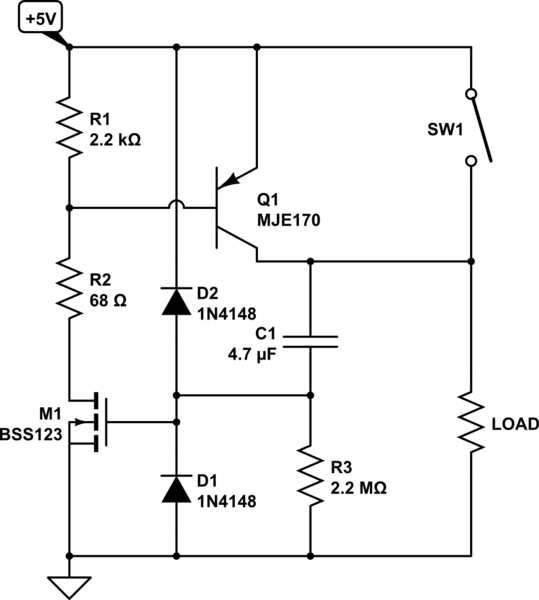 In the above case, when this timing circuit ends the timing cycle and turns \$Q_1\$ off, the LOAD will rapidly pull down \$Q_1\$'s collector. But \$C_1\$ now has a number of volts stored on it (which is why the circuit finally timed out) and would normally have to leak out through a very large valued \$R_3\$ if it weren't for \$D_1\$ available there. When the top end of \$C_1\$ is rapidly now close to zero volts and the bottom end of \$C_1\$ is perhaps now suddenly at \$-4\:\textrm{V}\$, that diode helps to discharge it making \$C_1\$ ready rapidly for re-use in the next timing cycle. Otherwise, the RC time constant would be on the order of ten seconds and you'd need a number of those periods to completely discharge \$C_1\$.

That's an example of where a diode is useful to discharge energy in a capacitor. There are others. But unmanaged inductors can create very large and very difficult voltages. So there is a difference in magnitude which makes a qualitative difference in reasoning.

Not the answer you're looking for? Browse other questions tagged power-electronics passive-networks flyback or ask your own question.

15
Why is flyback air gap needed for energy storage?
7
Is it possible to store flyback voltage in capacitors?
2
Trying to understand flyback diodes and general diode orientation
0
Two flyback diodes in parallel across a relay coil?
2
Current flow in a simple flyback topology
7
Are flyback diodes needed for this op-amp voltage controlled inductor?
5
Are bypass caps reason why uC don't have flyback diode across ferrite bead in the sample schematics?
1
How does flyback converter with two MOSFETs work?
0
Sending flyback current to another inductor using crossed diodes