Using DC voltage instead of AC to supply SMPS

Situation:
You have a battery pack with voltage of 300V. You have some appliances designed for 250V AC. These appliances have SMPS inside.
Claim:
Instead of using DC to AC inverter, you can use DC voltage to supply SMPS inside your devices.
Reasoning:
250V AC has peak voltage around 350V. First stage of SMPS rectifies 250V AC to maybe around 300V DC. This voltage is then used to supply another stage of SMPS, but that's not important for this question. So basically from 2 stage of SMPS onwards, SMPS knows no difference between AC and DC supply voltage.
Advantage:
0 cost of inverter, 0% losses on DC to AC inverter
Disadvantage:
You can use this method strictly just for appliances with SMPS in them.
Question:
Is there something I missed? Is there reason why this would not work?

I have practical experience with PC power supplies. Pretty much any modern ATX PSU contains a main section (that delivers full horsepower when the PSU is on) and a tiny section to deliver +5VSB. In a decent PSU, both are SMPS, i.e. do not contain a classic iron-core AC-only transformer (which would surely blow if fed by DC mains).

There are still some cheap ATX power supplies on the market, that do not contain a proper SMPS-based PFC stage, or use a so-called "passive" PFC, which is essentially an inductor in series... PSU's with a passive PFC typically have a switch to be configured for 120 vs. 240 V AC, or (here in Europe) are "240 V only", with a modest margin of tolerance. For the purposes of DC operation, I do not like the cheap variety very much - not exactly sure what to expect from the hefty inductor at the input on transient events (power on/off - probably not much risk but you'd better watch out) and also because my customers typically have a DC mains rail that's "somewhere inbetween", such as 250 V DC.

As you have mentioned, the direct-rectified peak voltages are about 340 V DC derived from 240V AC, or 170 V DC derived from 120 V AC (the ratio being a square root of 2). Thus, 250V DC is probably too low for a PSU specified at 240 V AC (= 340 V DC). The PSU would either refuse to run, or might risk heat overload of the primary (due to too much current flowing in, to compensate for the lower voltage). This latter risk depends a lot on actual load attached to the secondary side.

PSU's with active PFC typically have a wide input range specified, such as 100 - 240 V AC (140 to 340 V sinewave peak). This is because the SMPS PFC stage actually works as a boost converter, with a relatively small capacitor on its input, following the sinewave, and upconverting any voltage you give it to some 400 V DC in the PSU's main primary capacitor - for the main down-converting stage to have a "nice level playground".

The 140V DC minimum at the PFC stage's input is actually debatable. The PFC stage uses a special circuit, regulating its current draft to follow the input "rectified sinewave" waveform. I guess it's called a "current mirror", which sounds more like something from the "op-amp internals" nomenclature (see also "long-tailed pair"), rather than a term specific to PFC controllers... either way, this circuit modulates the PWM to make the current draft fluctuate in sync with input voltage, to mimick a resistive load... and if the input voltage is perfectly constant, this should result in a perfectly constant current draft, right? Back to the 140 V DC minimum (for 100 V AC): consider, that at 100 V AC, the PFC "current mirror" still strives to follow the sinewave, so it actually works from much lower voltages. And, at 100 V AC (140 V peak) = at the corresponding current (some sinusoidal Ief) it still has bearable losses = heat dissipation. Arguably, if fed by DC voltage, a similar level of loss and heat can be obtained at 100 V DC, rather than 140 V DC, agreed?

The one point you may be somewhat doubtful about, is the input Graetz bridge, which will be stressed in a half of the diodes only - but this is typically no problem.

One somewhat subtle issue remains: inrush limiting. AFAICT, even the modern PFC-equipped PSU's actually suffer from the power-on inrush when the big primary cap is getting charged (= with an ATX PSU, this happens when you plug the mains cable in, rather then when you push the PC's power-on button). The PFC stage's boost topology alone doesn't contain any inrush limiting device (except maybe for the choke, but that's relatively small). If the PSU is equipped with an NTC for inrush limit, it will probably work fine for DC as well. If the PSU contains a thyristor-based (PWM-based) inrush soft-starter, that would be a problem, as the PSU would either not work at all, or the thyristors would not switch off, and there would be a hell of an inrush :-) You are probably not likely to meet thyristors in the input Graetz in a PSU on the order of 400 W or thereabouts.

Inrush pulse limiting is a pain even at lower-volt (< 50 V) DC mains rails - a problem that hardly anyone cares to address, until it comes back to bite them...

As for overcurrent safety: people working with higher-volt DC in their automation gear (some railway and substation folks) typically use special models of circuit breakers that are specified for DC operation at the desired voltage. They look very much like your normal AC circuit breakers on the DIN rail, except that they have the special property that they can disconnect a DC current. Up to a certain level of current and voltage, anyway. See also "circuit breaker selectivity".

Overall, I myself would be very afraid of the DC voltage, should you ever touch a bare wire by mistake. Once you get caught, it won't let you go. Not very good for household use.

Yes, it can be done.

The German computer magazine c't tested several devices in a recent (early 2016 - link German only, not the full article) issue that tested this very thing. They found that many devices will run from a DC voltage well under 100VDC, which made it easy to build battery packs to power devices built for AC.

The minimum DC needed to operate an AC device varies depending on the design of the SMPS. I remember some operating on less than 40 VDC, though others needed higher voltages.

The thing to watch out for is devices that aren't double insulated. If the device expects to be grounded but isn't, then you can end up with dangerous voltages on exposed metal parts.

This last bit is especially important when using devices like oscilloscopes that have exposed ground connections.

There are some good explanations for why this is dangerous here on EESX.

As noted by frr, the devices may run hotter when running on the lower DC voltage. This may lead to the device failing earlier than it would if operated only on the specified AC.

Like it has been said in the comments. It is possible to use most smps units directly from a DC source. Therefore you can save the cost of an inverter. One situation should not be overlooked. Some appliances use the mains frequency for counting and/or timing. These situation are not always visible from the outside of the appliance.

This covers a subset case only, but deserves a minor answer in its own right (rather than a comment which can be deleted or missed.)

Some power supplies take advantage of the AC input variation to provide a smoother DC output than would occur with rectification and a given degree of smoothing.
Operation of these circuits on DC input will violate assumptions made by the circuit designer and may have implications for power dissipation or other functionality.

One example are "valley fill circuits" (wikipedia) which charge capacitors in series at high input voltage and then discharge them in parallel at lower voltages as Vin falls towards the AC zero crossing point. These circuits are more common n modest power applications such as LED lighting where avoidance of mains frequency induced flicker is important. These are similar to some power factor correction circuits mentioned below but the primary purpose may not be the same. (Wit LED drivers the arrangement may bot improve flicker performance and improve regulatory compliance.) 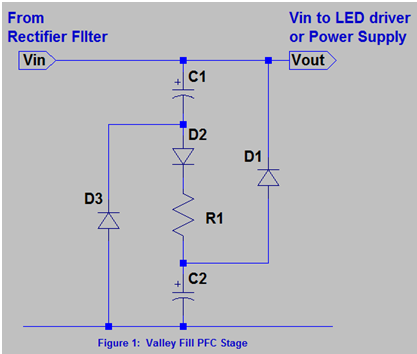 C1 & C2 charge in series and discharge in parallel - acting as a Vin_high halver to supply current during low Vin periods.

From here . They see this as a PFC correction circuit.

What’s the Difference Between Passive and Active Power-Factor Correctors?

Power factor correction circuits have been mentioned. A class of these boost Vin to a voltage equal or higher than peak Vinmax. Whether these would function on DC input depends on design.

Yes it will work but there are concerns about the Breaking capacity of the internal fuses which are specified for say 250VAC but Not for 200VDC . What about any mains switches .Most mains switches are AC only .If you know what you are doing when it comes to fuses and switches then go ahead otherwise dont .Remember that DC power systems need larger switchgear . I have seen Off the shelf 12VDC SMPS used in electric vehicle conversions where the operating volts was about 300VDC .The 12V was used to supply standard auto electrics .When the AC Vs DC debate was alive this was postulated as one of the drawbacks of DC before the 3 phase induction motor clinched it for AC.

Not the answer you're looking for? Browse other questions tagged switch-mode-power-supply battery-operated or ask your own question.

58
Why do we need an isolation transformer to connect an oscilloscope?

0
SMPS power supply shows strange AC voltage output
1
SMPS input voltage
1
Using a dc power supply instead of batteries
3
Is SMPS a non-isolated power supply?
2
Questions about a design for an SMPS post regulator filter circuit?
1
SMPS voltage feedback using op-amps
2
How to hack to limit output power of a regular SMPS?
0
Can I use a single SMPS instead of 4 separate transformers?
0
Modifying SMPS power supply to produce a negative voltage