I have a problem with short current-pulse widths through the diode of an opto-isolator -- with widths less than \$1\:\mu\$s. The charge in each pulse is approximately 3 nC. The current height of the pulse is adjustable, as I have a series resistor available for setting the peak current. The pulse shape starts at the peak value and then follows the usual RC decay for the trailing edge. So the current pulse takes on a sharp onset followed by an RC decay. Roughly speaking, that can be taken as a triangle shape, where the following relationship exists:

The 6N136/HCPL4502 isn't spec'd with fast enough rise and fall times. The IL610 (see: datasheet) is fast enough. But those things are expensive and I've no experience with them, or their availability. I am going to buy some of the 6N136 and IL610 parts to play with. I'm not excluding them. But in the meantime I'm interested in ideas about using more pedestrian methods using parts like the 4N25.

Here is a schematic I'm considering: 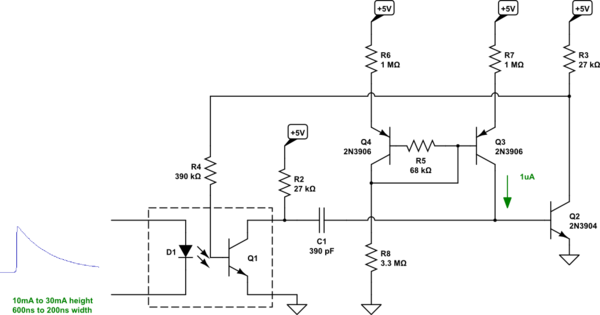 I just started thinking about this problem, today. And I may already be way off-base (still need to lower the output impedance.) I may also be guilty of not yet spending enough of my own time thinking about this, but I'm interested in any obvious difficulties I missed or preliminary thoughts about different directions to point in regarding the use of a 4N25A for something like this. I have those laying about and nothing else, yet. (Yes, I will be getting those fancier devices and trying them out.)

For now, are there any ideas about how to flog a 4N25A into a predictable circuit for something like this? (The CTR is spec'd given enough time, time I don't have. So I'm assuming very little of the pulse gets through and that I have to set up a sensitive circuit.)

If interested, this is driven by a microwatt VFC I've designed, which develops periodic \$3\:\textrm{nC}\$ discharges through the optocoupler. The VFC is attached to an arbitrary, different supply under observation and must present a \$25\:\textrm{M}\Omega\$ load to a \$15\:\textrm{V}\$ source, delivering a pulse frequency of \$200\:\textrm{Hz}\$. It's easy to compute the allowable discharge per pulse here:

The allowed target supply variation is \$4-120\:\textrm{V}\$. (Think of this like powering a circuit from an old POTS phone line service in the US, where each on-hook phone is only permitted to load the line by \$5\:\textrm{M}\Omega\$.) This means the frequency can reach about \$1600\:\textrm{Hz}\$. (It goes a little bit non-linear as you approach the lower voltage limit, of course, and the frequency drops to perhaps \$10\:\textrm{Hz}\$.)

In case it helps, here's the VFC sketch: 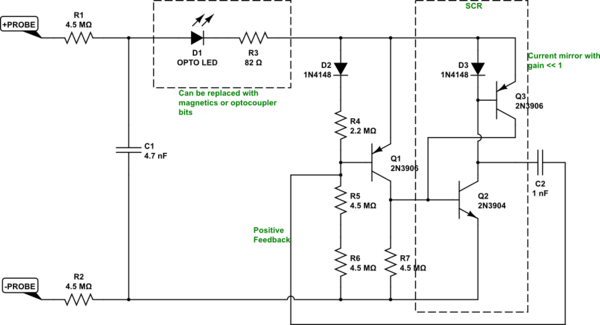 (Those \$4.5\:\textrm{M}\Omega\$ resistors are as big as they get and still be cheap and widely available.)

I'm also thinking about smearing things out with a \$100\:\mu\$H inductor in series with the LED. Makes a nice round bump out of the pulse. Might make things a lot easier with the 4N25A. However, there may be a cost with the SCR circuit, dragging things out like that. I need to worry over that bit, as well. (Particularly the positive feedback aspect through \$C_2\$.)

PUSHING THE “SPEED ENVELOPE”
If less than 1 μs toff is required, there are some additional measures that can be taken to further increase the switching time of a standard coupler. […]

PHOTODIODE OPERATION
One possibility is to give up current gain for the sake of speed in the extreme, and operate a standard transistor coupler in photodiode mode by only using the base collector pins of a 6 pin coupler. This will vastly increase the switching response of the device but will require an output buffering stage to produce a practical signal level. Also, it is possible to further increase the switching speed of this type of coupler by applying an increasingly large reverse bias voltage on the photodiode detector. The effect is to reduce the junction area and capacitance and increase the frequency response. […] Figure 30 illustrates a photodiode configuration which makes use of a trans-impedance amplifier to provide better gain and noise performance. The key principle of this design is that one can now take advantage of the lower junction capacitance of a simple reverse biased diode rather than the large capacitance of a phototransistor to drastically improve transient performance. 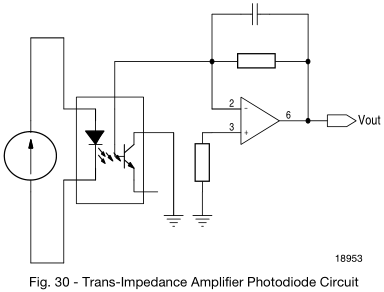 But don't bother with all this complexity; it also says:

At this point, however, economics come into the equation, and a designer needs to consider whether the increased complexity of the design is justified. The other option is to consider one of various parts that are specifically designed for high-speed operation.

This results in a nice digital signal; you then still need a circuit to make the pulse longer.

Not the answer you're looking for? Browse other questions tagged opto-isolator pulse or ask your own question.

0
What is a pulse width modulation for DC motors really?
0
Sampling frequency and the pulse-widths
0
Does a RF frequency multiplier work with ultrashort pulse?
0
Seeking recommendation for capacitor to handle high pulse current
0
Automotive signal isolation - alternatives to optocouplers
3
I wanted to convert 0-1v, 2ns pulse to 0-7v, 2ns pulse
0
How to estimate the overall CTR of this optocoupler from its test conditions
0
Stepper Driver pulses control (with Arduino)
0
Peak/envelope detector circuit for 30 MHz sine pulses with a 10 kHz PRF