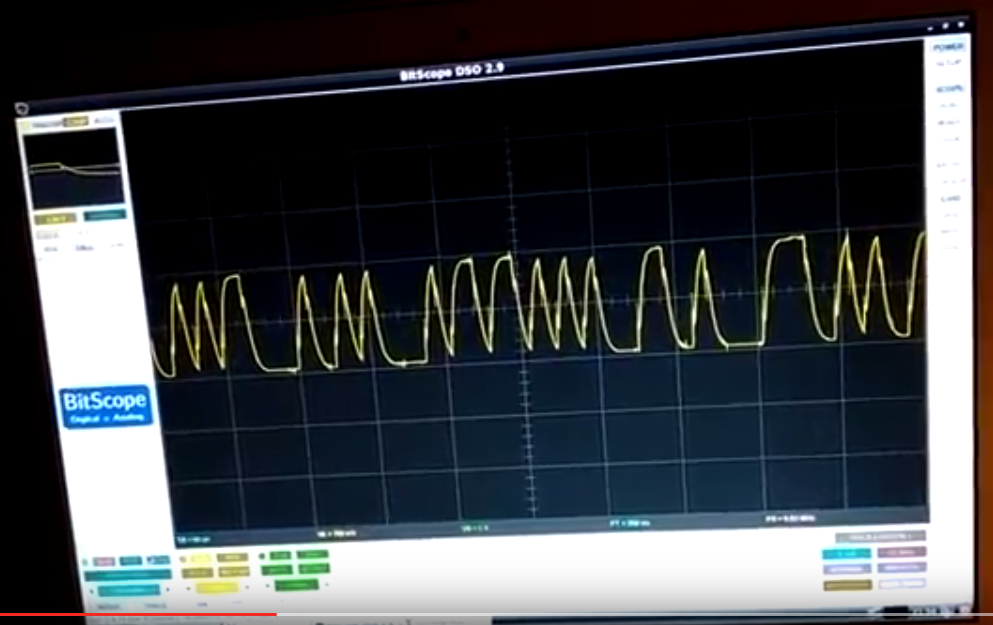 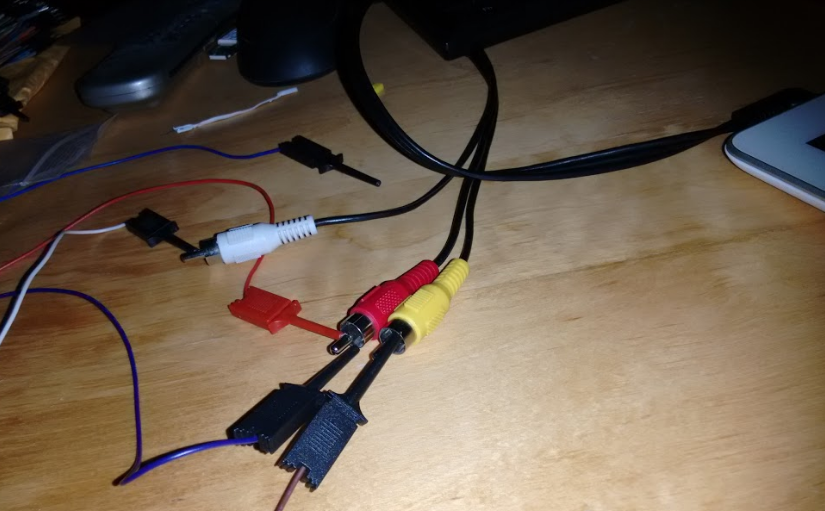 I want to decode the serial signal coming out of my tablet's headphone jack. This is a somewhat weird "hack" that exists in a few phones and tablets: basically, if you feed 3.3V in the microphone input of your TRRS plug, the left and right channels become serial TX/RX.

I used a Raspberry PI TRRS-to-TV cable (as you can see in the 2nd picture) to get access to the 4 places I needed: GND, MIC, L, R. The cable is not supposed to do anything other than expose the 3 signals (MIC,L,R - paired with GND) in the three corresponding cables (red, white, yellow).

I used my BitScope's probes to probe between the TX (tip of white cable in 2nd picture) and the common GND (brown probe at the bottom of the 2nd picture). I also used two probes (red and blue one) to "feed" 3.3V from my USB/TTL chip (a PL2303HX plugged in my laptop) to the MIC (red) tip.

Upon rebooting the tablet, I indeed saw what is unmistakably a serial signal at 115200 (peak-to-peak of 8 to 9us), but with lots of capacitance (video).

So, my question - before I go online and order a TRRS plug, cables and a soldering iron - is the capacitance I am seeing due to...

As you can probably guess, I am very new to this sort of thing; I am a software guy, bought my BitScope a week ago, and would love to access my tablet's serial for "fun and profit" (hacking bootloader stuff, compiling Cyanogenmod for it, etc).

I'd appreciate an estimated guess on whether this is a lost cause (i.e. the cables can't explain this much capacitance) or not.

Thanks in advance for any help/suggestions.

So, I followed the advice given by the two kind people that commented... Here are the results.

But it is possible to do so AFTER the boot is completed, from within an ADB shell - since I've managed to compile my own kernel and become root.

And indeed, the result is much nicer: 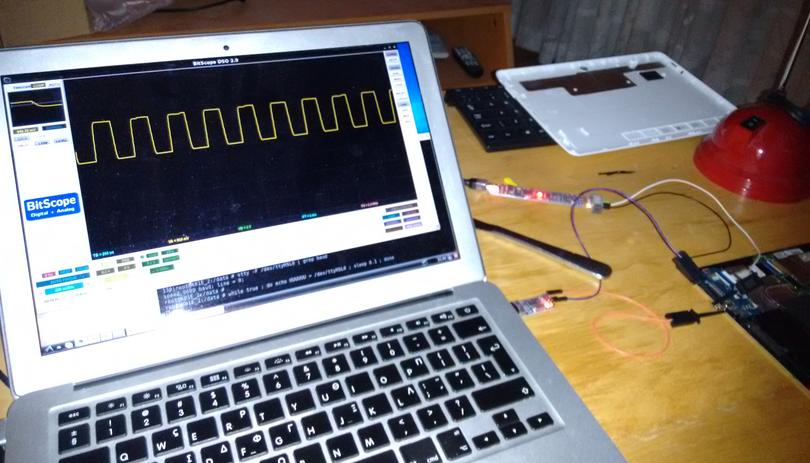 So, to conclude: my tablet's "serial port inside the headphone jack" can only really be used AFTER the boot is completed, and the UART slowed down to 9600 baud; which is unfortunate, since the serial output is needed most during the boot process (if something fails, that is) - and during that time, the UART speed is hardcoded in my tablet's boot code at 115200 baud.

P.S. I also tried a suggestion from a friend, to use a 3.3K pull-up towards the 3.3V rail in the serial signal sent out by the headphone jack - to no avail.

Following the advice from Chris Stratton - that a good shifter can cope even with this kind of signal - I bought a soldering iron, a BSS138, a breadboard and a bunch of cables. After what is probably the worst soldering job EVER, I managed to solder the pin headers on the BSS138, and then proceeded to attach it to the breadboard, and create this tangled mess: 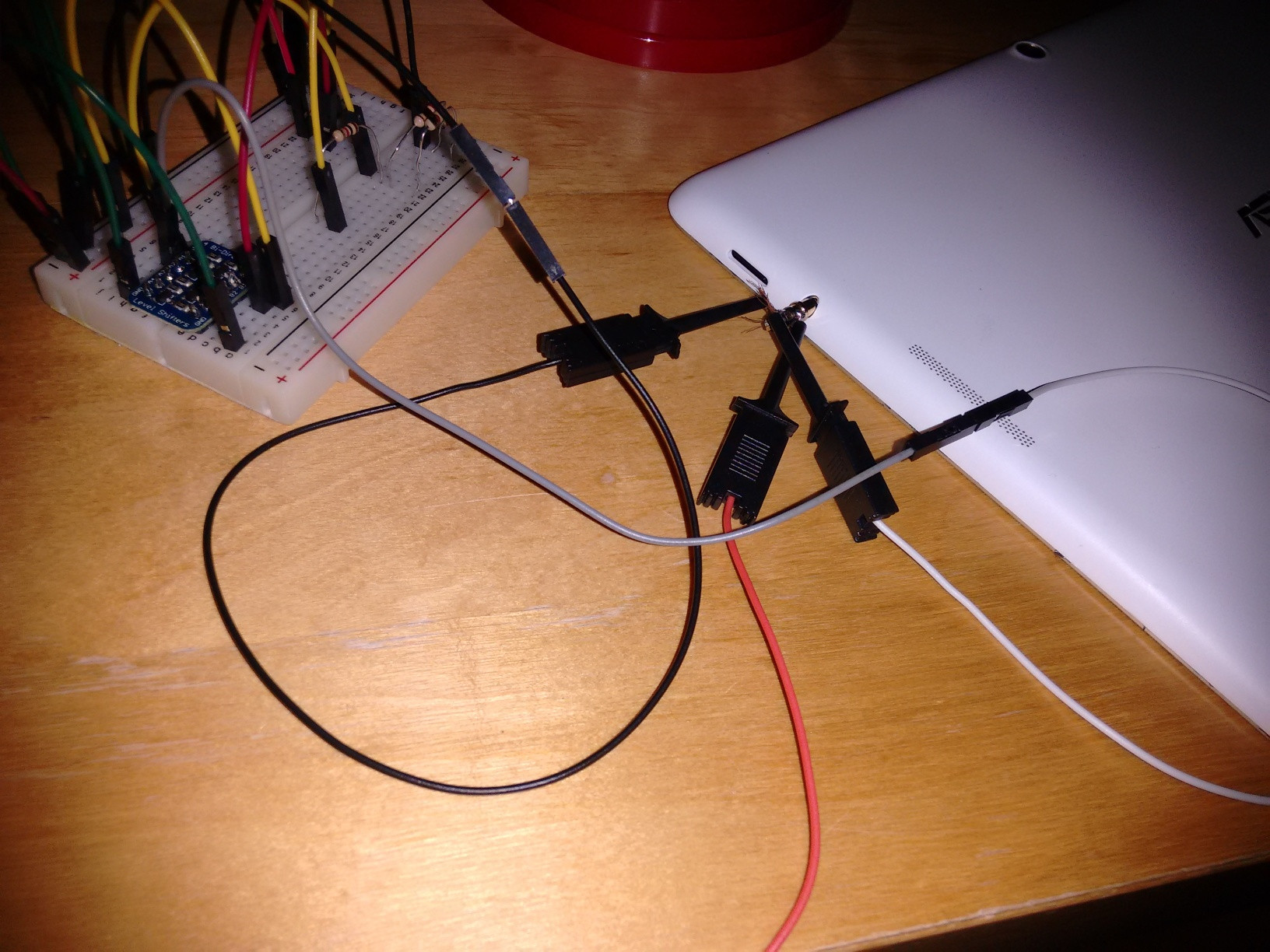 What I didn't expect, was that after spawning minicom and issuing a "fastboot reboot", to my utter amazement, I saw this: 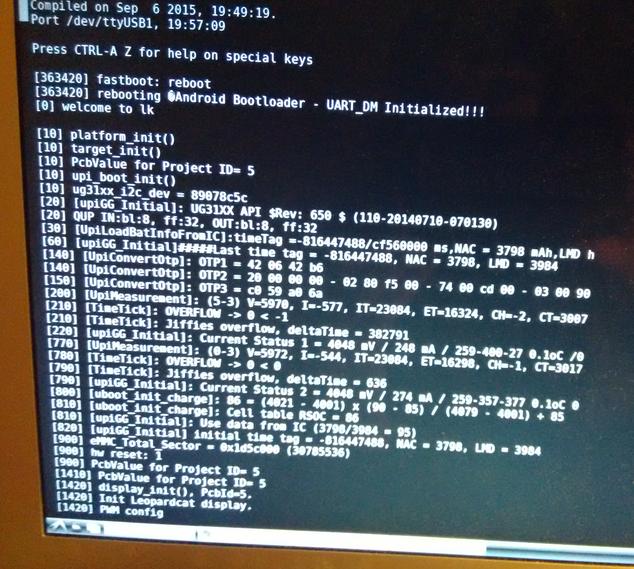 Unbelievable - after BSS138 "lifts" the signal from 1.8 up to 3.3V, that miserable, capacitance-riddled signal can actually be decoded! I can finally see why my tablet isn't booting.

Does your DSO have enough bandwidth @524ksps to even show a square wave at 115.2kbps data rate? I do think so. just FYI. I could be wrong.

Maybe you used a slower resolution.

3
Regarding Passive Probes 1:1 and 10:1
5
2.5mm Jack to USB data Cable
2
Voltage Conversion In PC Serial (DB9) Port
13
High speed passive probe - contradiction between authors or different points of view?
0
Replacing a broken 3.5mm audio jack with a different one, why does each cable have different amount of wires?
2
What kind of serial cable do I need? (TTL vs RS232)
0
Component recommendation for my PCB (probe)
1
How to measure high frequency with an oscilloscope without loading circuit down too much?
0
Stereo Headphone Cabling (TRS) - Why 4 pads on L loudspeaker and 4 cables?
1
Guidance for making wide-bandwidth X1 scope measurements