Power supply to MCU and Peripherals

I'm working on a device which is based around an Atmel Sam L21 ARM MCU with 4 UART devices attached (amongst other things), and powered by a couple of AA batteries. I've attached a very crude diagram of how things are connected, but I have the following questions:

I've read a couple of really detailed posts on here that relate to how and when to use decoupling capacitors, and I'm planning on reading through them again today to get my head around it all, but if someone could help me out with this power supply stuff, I'd be hugely appreciative! 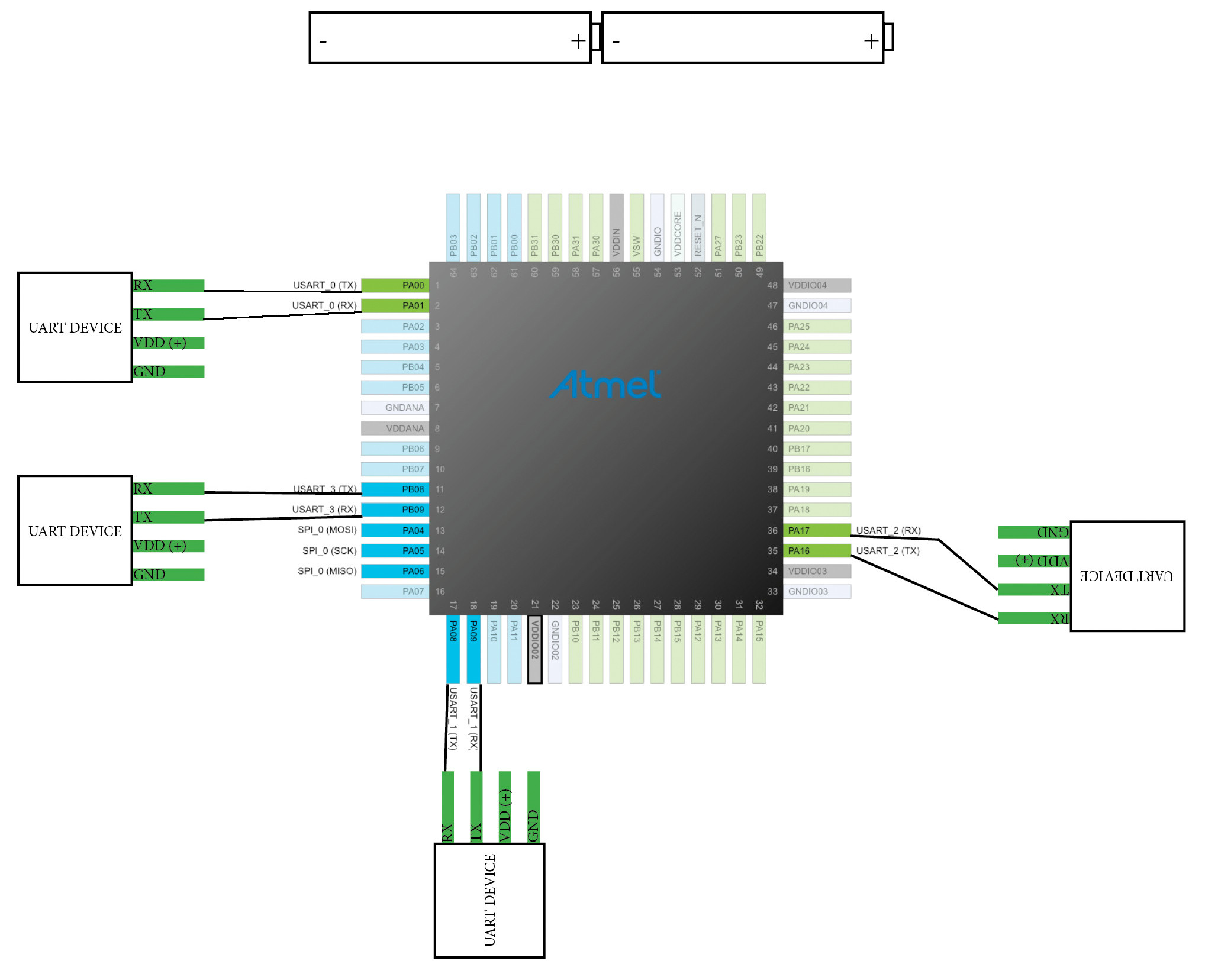 Which pins are used to power the MCU? I assume it's either VDDCORE or VDDIN and a GND pin at the top.

On the chance that this is a serious question and not just trolling, electronic devices come with things called datasheets. This is the industry-wide name for the document that gives all the specifications of a device. The datasheet of a microcontroller is often over 100 pages, and can reference other documents. All information needed to design a part into a circuit and to use it properly should ultimately be available in the datasheet or whatever other documents it might reference.

The pinout is absolutely something that will be in the datasheet.

Do I need to add decoupling capacitors between the power supply and the MCU?

Again, its not clear if this is trolling. If you know enough to know there are such things as decoupling capacitors, then it's hard to understand how you don't know that they would be required here.

Are the peripheral devices powered directly from the batteries, or through the VDDIO pins on the MCU?

That's up to you. Generally you'd power peripheral devices directly from the same power supply. However, in some cases where the device takes very little power and you want to switch it on and off, you can power it from a output pin. I've actually done this.

However, if you have to ask, then just power each device from the power supply directly.

Again, do these need decoupling capacitors between the peripherals and the MCU?

This is a stupid question, since it was previously asked, and the answer should be obvious anyway. In addition to this datasheet, you also need to employ something we call a brain. Even a minimal search here would have yielded plenty of explanations, such as "How do I know where I need decoupling capacitors?".

Not the answer you're looking for? Browse other questions tagged microcontroller power-supply pcb circuit-design or ask your own question.

6
How do I know where I need decoupling capacitors?

0
General Questions about PIC24 MCU Input and Output Pin Impedance, Voltage, and Current
6
Layout of decoupling capacitors
3
5v and 3.3v from 2xAA and/or USB
5
Debugging an MCU short circuit
1
Atmega328 and Servo on same suppply
2
Use of very large bulk capacitor for microcontroller power stability
0
Using a PCA9306 voltage-leveler with an MCU and a 5.5v arduino sensor
6
Is it ever bad to run an IC VCC trace next to a ground plane with 1mm clearance?