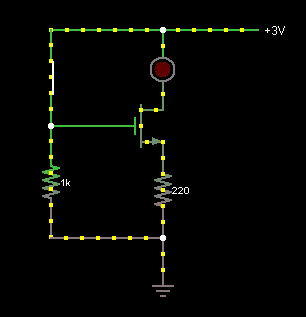 The idea behind it is that the MOSFET should act as a simple switch and turn the LED on and off depending on the status of its gate.

Well, my problem is that the LED is always on, even when the gate is connected only to ground, or directly to ground with no resistor. I've tried this with several transistors. At one point, I've had the gate floating and (as expected), I'd get various levels of light from the LED when I touch the gate. Also some of them can be now turned OFF by connecting the gate to the positive side of the power supply and with some, the LED actually is brighter when I connect the gate to the ground than when the gate is floating. From what I've read, such behavior is expected from depletion mode MOSETs, right?

Could I have killed the transistor or did I get bad parts? How susceptible to static electricity are they?

They are pretty susceptible to static, so I'd try a couple more.
Obviously make very sure you have it the right way round.
If they are cheap e.g. eBay parts (or from anywhere - we got sent the wrong part just last week from Farnell) then check they are not actually PNP parts (the fact that it turns off when you connect the gate to the positive supply sounds suspicious)
Also try and check that they are real parts - see if you can measure any conductance between drain and source or gate and source.

Assuming that the circuit is as shown and that you have the MOSFET pinout correct, then your MOSFET appears dead - and also acting unexpectedly.

3 V is not really enough to operate a BS170 - 5V is better. If changing to 5V (reccomended) re calculate LED resistor below.

The circuit is valid as shown BUT is rather more complex in functionality than you'd expect. I'd suggest putting the 220 ohm resistor in the Drain circuit in series with the LED for now.

LED with higher Vf will be vv marginal here.
White LED will glimmer. 5V MUCH better.

Having a floating gate on a MOSFET is not a good idea.
Any MOSFET tends to be ESD sensitive - especially the gate. Touching the gate when it is open circuit and you are not grounded can ruin the MOSFET's day - and all days after that.

The circuit behaviour is extremely strange. It suggests that you have the FET pinout wrong. I'd suggest that you carefully check the pinout. It it's right repeat the check and keep repeating until you find it is wrong and then fix it :-) ie the behaviour is very very strange to the point of being almost inexplicable.

The graph below shoes that with Vgs = 3V (3V on gate) int will condi=uct / carry / swithc under 100 mA typically. How much under 100 mA is uncertain and varies by device but ~= 0 mA is possible.
4V is better and 5V is much better. 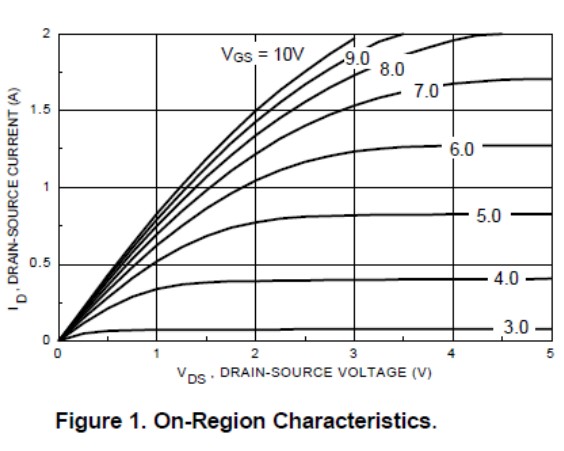 Be ABSOLUTELY CERTAIN that you have the pinout correct

Don't forget that your MOSFET has a body diode running from Source to Drain. So Drain is positive and Source is negative; otherwise the diode will always conduct and bypass the transistor (and gate control).

Not the answer you're looking for? Browse other questions tagged mosfet nmos or ask your own question.