So, they're insulators or poor/non-conductors of electricity.
Yet somehow they are also capable of holding and/or transmitting an electrical charge.
Does that not seem like a crazy paradox, contradiction, or oxymoron? 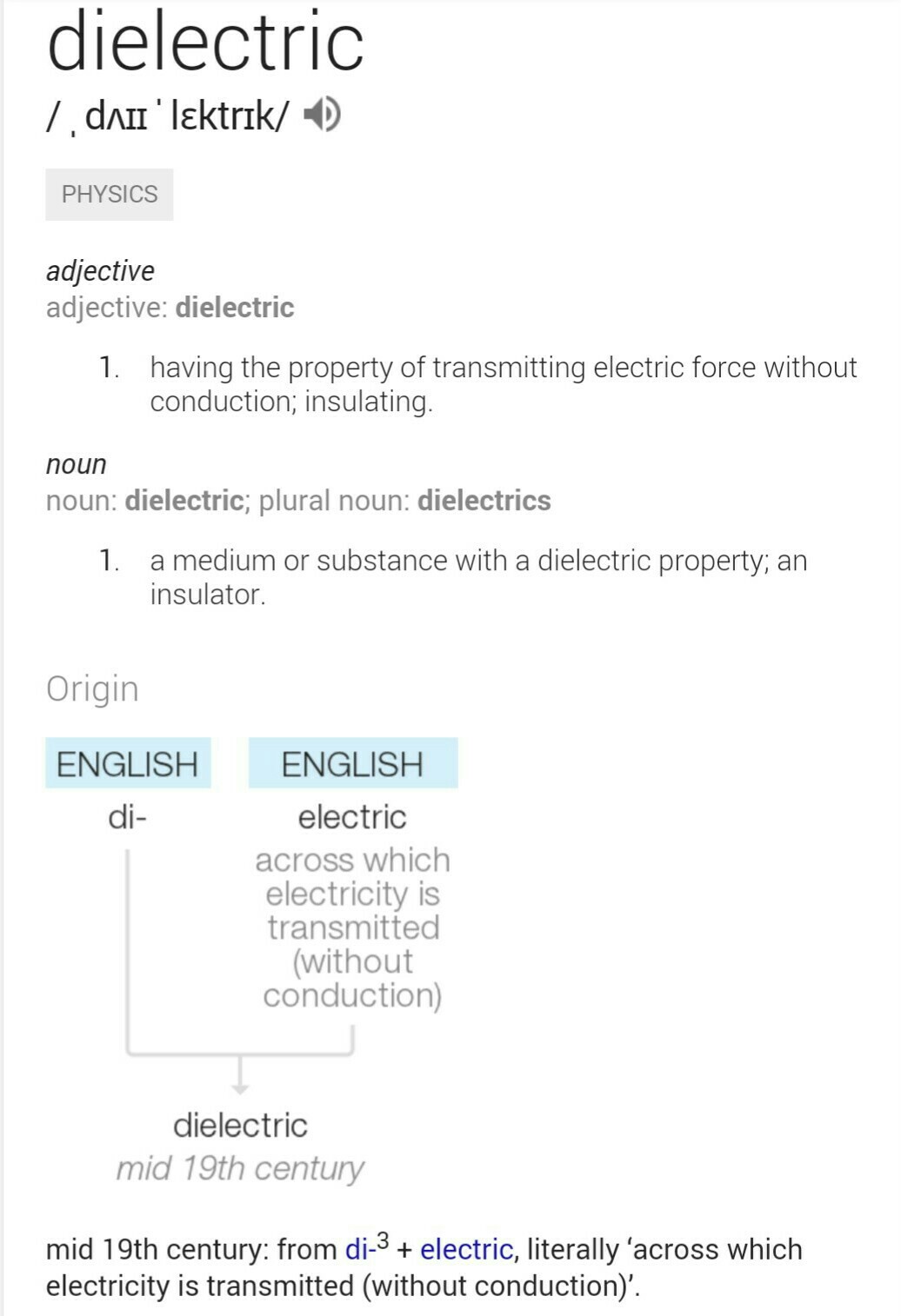 I need to pause for a moment here. Note that I didn't say the electric field in each plate of metal. I said the electric field between the plates. The reason is that in a conductor in equilibrium, in which there is a veritable sea of mobile electrons, the net electric field is zero everywhere inside the metal. You might imagine this as a kind of Faraday cage of sorts, I suppose. It is the work required to move a particle from one plate to the other, through the intervening electric field, that counts here.

The dielectric constant \$K\$ is defined this way:

This constant must always be more than 1 (with dipoles setting up opposing fields) because polarization always weakens the applied field. And as I said earlier, the easier it is to polarize the molecules the bigger \$K\$ gets.

So, a polarizing insulator:

Now it is a small step to see why capacitance increases. Suppose you have a certain charge difference between two plates with air in between them, set up by establishing a voltage across the plates. This same charge, though, placed on a capacitor with a polarizing insulator between the plates would find that the insulator sets up an opposing (smaller, but opposing) electric field because of the aligned dipoles. This would imply a decreased potential difference -- lower voltage -- for that same charge. But:

If there is a smaller potential difference but for the same charge, then the capacitance must be larger. It just follows.

There are other ways to look at this. One of my own favorites is to simply imagine that each dipole acts like a "shortcut" across vacuum space they fill. When you account for all these shortcuts, you wind up with a smaller effective distance between the plates. And this means a higher capacitance. (This analogy also works just as well for magnetic materials, where the aligning domains act like magnetic shortcuts reducing the effective magnetic path length. Same idea, really. But very different process. But it works just as well for relative permeability there.)

Hope that helps a little.

For your purposes, just go with non-conductor. Forget about poor conductors, transmitting charges, or holding charges.

What a dielectric material does is store energy when there's an electric field across it, you can turn it into a capacitor by putting a plate of metal either side of a thin sheet.

What a springy material does is store energy when there's a stress on it, you can turn it into a spring by drawing it into a thin wire, and putting a loop on each end.

Although they work by slightly different principles, they have the same equation to describe their behaviour.

To be able to understand dielectrics, including vacuum-capacitors, first we need to clear up a couple of misconceptions.

Second, there are two types of field: b-fields or magnetism, and e-fields or voltage.

It's a common misconception that voltage is "just an abstract concept." Nope, wrong. Ever since Faraday we've known that e-fields and b-fields are real. Faraday defeated the earlier physics belief, the belief in direct action-at-a distance, where the fields were just some mathematical artifacts and not actually real. Maxwell destroyed this belief when showing that e-fields and magnetic fields can peel loose from matter and go flying across space as light and radio waves. So, is a beam of light just a mathematical artifact; an abstract concept? Of course not. In the same way, voltage and magnetism are real things. They're fields which can extend across empty space.

But ...voltage is a FIELD? Yep, voltage is a way of describing e-fields. The other method for describing e-fields is as flux-lines. The flux-lines of an EM field are always perpendicular to the equipotentials. So, each electron is surrounded by a radial puffball made of e-field flux lines, but it's also surrounded by a concentric spherical onion made of voltage. The parallel plates of a capacitor are connected by e-field flux lines, but also we find a stack of equipotentials or "voltage-planes" packed between those parallel plates.

All of the above should be obvious even to a physics beginner. However it may be new info to many, since in grade school we concentrate on magnetic fields and magnets, while only mentioning e-fields and "Electrets" rarely or even never. The concept of voltage-fields is commonly hidden inside "Static electricity" and then ignored. (As if flashlight batteries have nothing to do with voltage?!) In fact, the "driving force" in all electric circuitry is the so-called Static Electricity, the e-fields or electrostatic fields, measured in terms of volts.

So, whenever we force some charge into one terminal of a capacitor, and an equal amount of charge then flows out of the other terminal, the two terminals are being connected by empty space full of pure voltage.

Maxwell's first great discovery was that a radially-changing voltage is the same as an electric current. Maxwell gave the name Displacement Current to the "current-like effect" found in the empty space between capacitor plates. When one ampere is found in the capacitor's connecting wires, one ampere of Displacement Current must exist in the dielectric between the plates. (A capacitor is not an open circuit. Same as any 2-terminal component.) Historically, this Displacement Current then led directly to Maxwell's second great discovery of EM waves in the e-fields and in the b-fields; waves which traveled at exactly the speed of light.

What are effing magnets? A more interesting question is, what are effing ELECTRETS? Most beginners already have a fair understanding of inductors and magnetic fields. Capacitors then remain mysterious because our grade schools never gave us a solid concept of the voltage-fields and the Electrets.

One last thing: we know that a ring of moving charge, with an iron core in the center, that's an inductor. But what then does a capacitor look like? What would we see, if we could see the charging-up process? We'd see CHARGE SEPARATION, where existing pos and neg charges are pulled away from each other and held at a distance. The MIT open source project has a video of just that:

Apply a constant pressure in one direction, the membrane bulges until pressure and membrane stiffness equalise - system is charged. Release the pressure and flow occurs in opposite direction, system discharges. This is DC flow.

Not the answer you're looking for? Browse other questions tagged basic charge insulation conductivity dielectric or ask your own question.

8
What is an amp (and other such basic questions) in the simplest possible terms?
1
USB OTG with occasional charging
5
Pros and Cons of Types of "Dielectric Grease"
0
Looking for a formula for calculating maximum induced AC voltage in two air coils next to each other
28
I've become an electrical conductor for my headphones... but how?
0
Confusion over the power wires of USB (GND and +5v)
2
What actually flows, current electricity or charge?
2
How to get negative voltage?