I am building a guitar amp for a senior projects class and one of the amps I am modeling around has some electrolytic capacitors used in a way I don't understand (see picture below) and more importantly I have no idea where to buy some of these values anywhere which makes me think these aren't electrolytic capacitors. Basically, won't this kill this caps considering its AC? 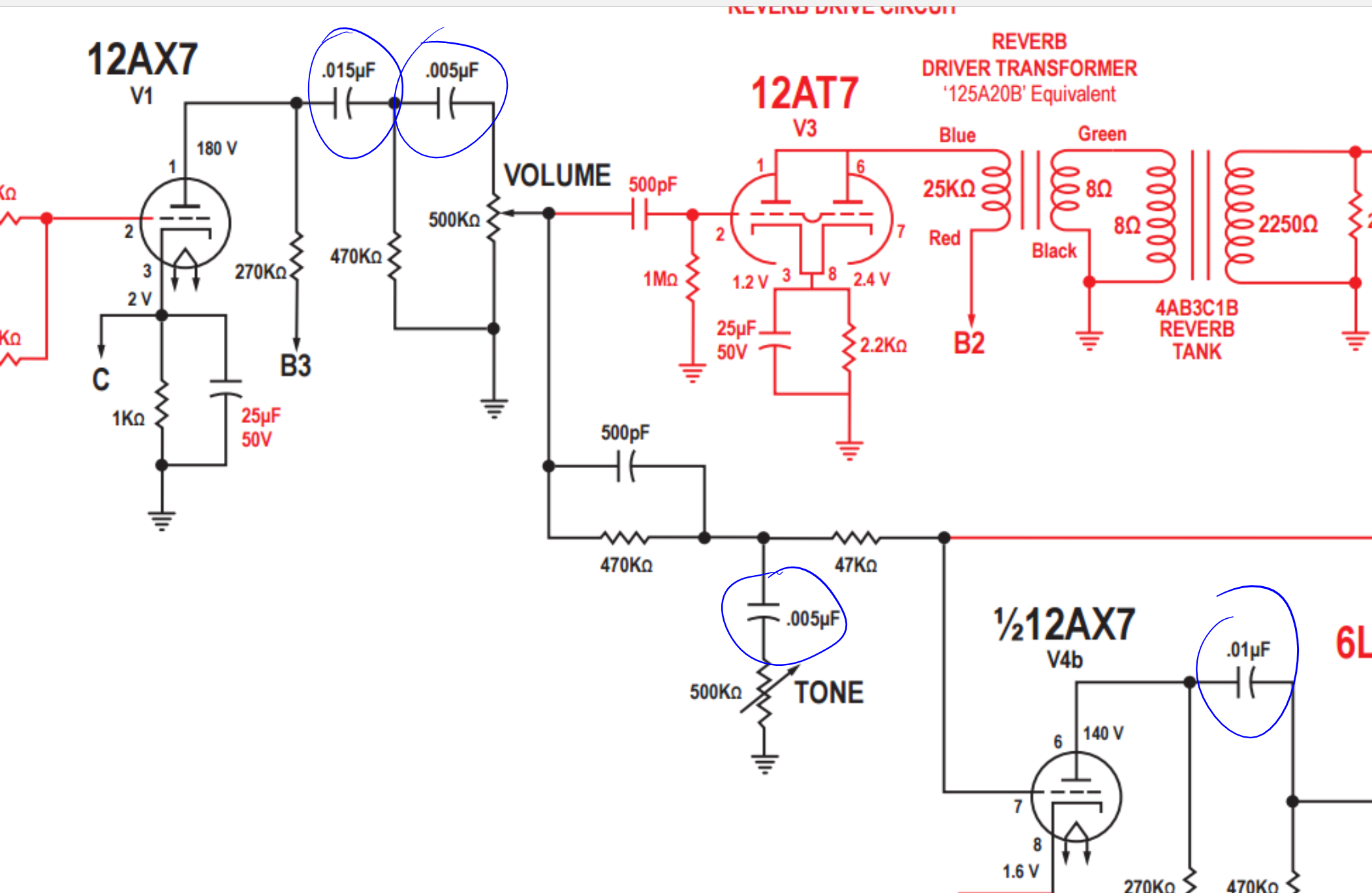 full schematic can be found here, I have completely changed about everything but the capacitors are still relevant. http://www.mediafire.com/file/0jrroz0jx2ee8cj/Final+Version+Tremoverb+Diagrams+25+Oct+15.pdf

Back in the days capacitors have been built by having two metal foils separated with insulating film. If you roll them one metal film will be on the outside. This is usally marked on the part somehow because having the outer side connected to the lower impedance point in the circuit gives a slight advantage for noise immunity.

For buying parts, the classic brands for guitar amplifier capacitors still are:

If you google for them you'll find online shops selling these.

If memory serves me correctly bearing in mind that I am an old guy who grew up with vacuum tubes. The B voltages are DC not AC i.e. +180 VDC. The signal on V1 pin 2 is ac and the output that triode is pulsating DC which must be blocked before entering V3. After those capacitors the signal is pure AC with no DC component. Those small value capacitors are disc ceramic. The 0.005 uF capacitors are used for bypassing any stray RF signals to ground.

They are, as others say, film capacitors as opposed to electrolytic, and the first one (0.015 uF) has several hundred volts of DC across it.

Different film types have different properties (search "dielectric relaxation" for one) which will affect the sound of the amplifier to a certain extent - in the UK in the 50s and 60s, "Visconol-X" was a common brand but this is obviously an American circuit, from the style of the tube symbol and the 12A?7 series as opposed to ECC81/83. So I won't recommend any, though paper-in-oil would be period-appropriate, and from hearsay (citation needed!) I'll suggest you avoid mylar film.

I think the tone (treble) and output side arrangements are pretty self explanatory, but it might not be obvious what's going on ahead of the volume control.

With 180V on the anode, and a 500 kilohm volume control, any leakage current at all in the coupling capacitor will develop some DC across the potentiometer, and that leads to loud thumps and crackling noises as you change the volume.

Acceptable from an old radio at home, but excruciatingly embarrassing on stage at Woodstock, or anywhere you mic the amp (or DI from it to the mixer) and play it though a house-sized PA stack.

And film caps, especially of that age, were prone to developing leakage. So 2 stages of AC coupling are employed, and you can easily test the first by measuring the voltage across that 470K resistor. It's a nice touch in a (presumably) professional amplifier.