I am currently in the process of sizing my flywheel for a reaction wheel that I intend to build as part of a project. I was wondering how to calculate the maximum acceleration and torque deliverable by my motor after I attach the flywheel to it. The motor I am currently using is this Faulhaber 2610T006B, shown below:

I am guessing that the mass of my flywheel plays a part, but I am unsure how to do the calculations.

The problem - turn a cubesat using a reaction wheel.

In physics, conservation laws are very useful, as it enables you to cut through lots of error-prone and confusing calculation, and find the important thing at once.

Consider the following abstract diagram of a CubeSat and its reaction wheel (motor between them not shown)(yes, I have thought about the rotation sign convention for the diagram)(lengths of vectors not to scale) 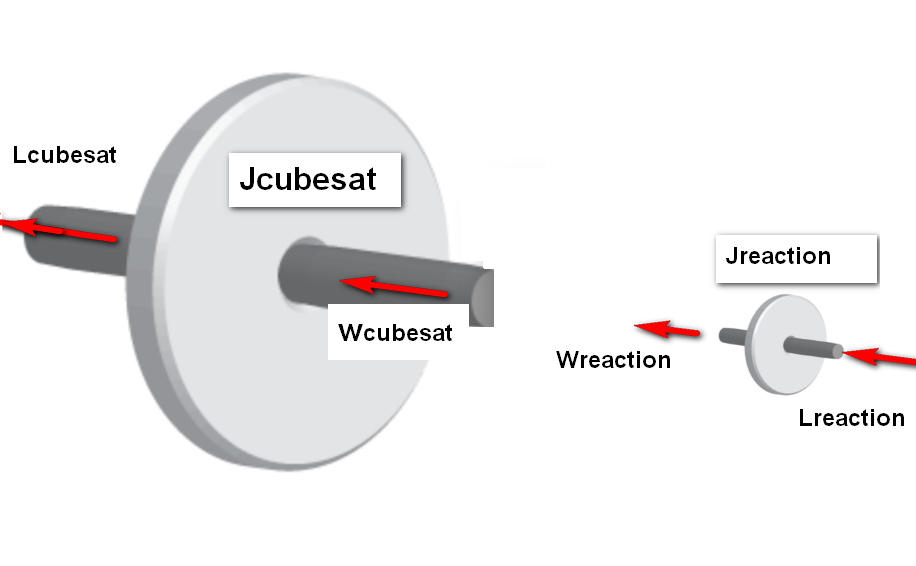 Assuming no external torques (secular or magnetorquing), then at all times the sum of their angular momenta will be zero by the Conservation of Angular Momentum $$ L_{cubesat} + L_{reaction} = 0 $$

If we want to spin the reaction wheel, keeping its speed less than some limiting speed (mechanical and policy), in order to spin the cubesat at at least some speed, then we can re-write this as $$ \frac {J_{reaction}}{J_{cubesat}} >= \frac {w_{cubesat}}{w_{reaction}} $$

For the numbers used in the other post, we want to turn the cubsat through 90 degrees in 30 seconds.

There are several ways to do this, a few exemplars are illustrated below 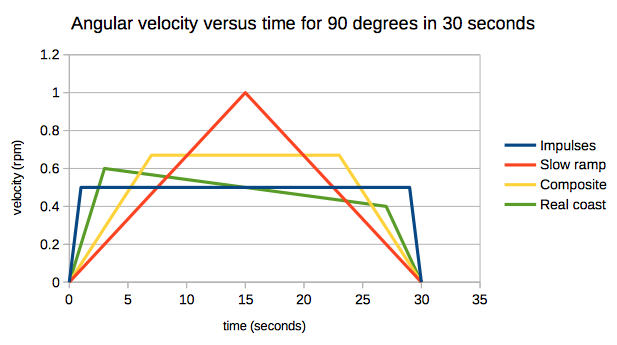 At one extreme, the blue curve is the conceptually simplest, to accelerate the cubesat as quickly as possible with an impulse of torque, and then allow it to coast at constant speed for 30 seconds, before braking it hard at the end. The area under the speed curve is the angle turned. Half a minute at 0.5 rpm is one quarter of a turn, or 90 degrees.

Other trajectories are possible that have the same width (30 seconds) and same area under the curve (quarter turn).

At the other extreme, the red curve shows the lowest acceleration trajectory possible. In order to get the same area under the curve, we need twice the peak angular velocity.

The yellow curve uses less torque (ie motor current) than the blue trajectory, and a lower peak speed than the red one.

The green curve is what we would see if the motor was actually unpowered during the 'coast' phase, bearing friction would slow it slightly, which would produce a small braking torque on the cubesat rotation.

Which of these trajectories is preferable depends on system mass, energy consumption, and possibly a few personal preferences. As a rule of thumb, the optimum is not to be found at either extreme.

We can calculate the required flywheel inertia and the motor torque independently.

The calculation is somewhat pre-empted by the motor having already been chosen. It has a max speed of 6k rpm, a max torque of 3.5m, and a MOI of 800n.

The published Jcubesat is 30m kgm2.

As an assumption, the maximum motor speed permitted for this manouevre is 3k rpm, to allow a little in hand. Other max motor speed choices can be accommodated by simply changing the MOI of the flywheel.

If we want to support the slow acceleration manouever with a peak cubesat speed of 1rpm, then Jreaction must be at least 1/3000th of Jcubesat, at 10u kgm2, so a Jflywheel greater than 9.2u kgm2.

First calculate how close we can get to the impulses trajectory

Less than twice this torque is required to get the yellow trajectory, with its corresponding saving in peak speed and so flywheel mass.

2
Which electro motor to use for steering a kite? (guestimation marathon)
2
DC Brushless Motor For Electric Rover
0
Angular Acceleration: Understanding the differences between Gyroscopes and Accelerometers
0
DC motor constant acceleration
4
Calculating total torque of stepper motor to lift and rotate some weight
2
Sizing a motor for a conveyor
0
BLDC motor current sensing for load torque