Is one circuit better than the other to drive the PNP transistor?

Of the two circuits, would you prefer one over the other? 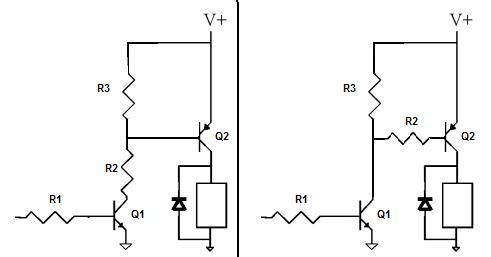 In most applications it doesn't matter. The first circuit will turn off the PNP a little faster, which would only matter in high speed switching, like if the load was being PWM controlled.

Here is yet another topology to consider:

This only works if V+ is about a Volt or more higher than the highest VCTRL can be, but can be useful when that is true. I'll let you think about how it works.

As shown, both are equally good and both achieve much the same result.

In some cases if there was extra circuitry involved one or other may be better.
For example, if you wished to drive two PNP circuits from the same NPN circuit at the same time then circuit A allows slightly more design independence. For example, if one pnp was at V+ = 3V3 and the other was at V+ = 12V, then circuit A would still be easy to design properly, whereas using circuit B would leave uncertainties what happened to the collector of Q1 when Q1 was off.

Not the answer you're looking for? Browse other questions tagged transistors pnp or ask your own question.