There is an atmospheric pressure load (coaxial cylinder and copper wire as main electrode) which high voltage pulses by a Linear transformer driver (LTD) has been released to it. I think a kind of corona discharge will happen in atmospheric load after applying high voltage pulses. Discharge is happening after breakdown by high potential electrode. Question: Why if we release two continuous voltage pulse (50ns, 15kV pulse and then after 100ns another 50ns, 15kV pulse), The peak of discharge current in the first pulse is almost twice than 2nd one? 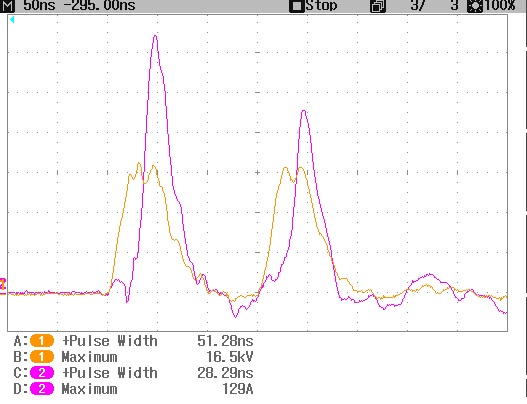 and if we increase the distance between pulses like as (50ns, 15kV pulse then after 1ms another 50ns, 15kV) the peak of discharge current in two pulses are same as each other.

Thanks for useful replies. I have to mention some points. 1st of all here in following link (Blue colored phrase) you can see the source of energy.Pulsed Power Generation by Solid-State LTD, It is a linear transformer driver which has 30 modules. These modules have capacitors and MOSFETS as switches and modules are connected inductively and voltage multiplication by inductive voltage adding is our output energy Please read if you have time. I think the source of energy does not have much effect on the explained results because I have tested the experiment with Resistor as load not this atmospheric discharge load. In resistor case the current peaks are almost same even in 100ns distance. But when it comes to this atmospheric discharge load (A coaxial cylinder and copper wire) current peaks are different in close distance as 100ns. But still I am not sure, It might be some effects of energy source. Our LTD (source of energy) is working based on inductive voltage and we have core and magnetic field there. Would be any effects of core saturation or B-H curve? Simplified picture of load is in here. 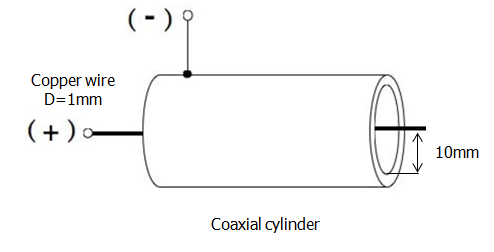 If I try to circulate the air, would I receive any different results. It would be very helpful if you explain/give hints/introduce some useful sources of information on relation between time and current peaks in this case! Thanks for your time!

If there is no effect from the setup itself, this sounds like an effect of the ionized air to me.

In a corona discharge, the electric field is high enough to ionize the air, making it a conductor and creating light.

I'm not sure why the current of the second pulse is lower, one could also imagine a higher current, since there are already ions around. It is possible that the ions already act as conductor before the voltage is high enough for a corona discharge, which means the effective diameter of the conductor (the wire) increases. This lowers the field strength and so the rate of ionization and the current flow.

Think about: 100A is really lots of current, and I can't imagine a corona discharge with a constant current of 100A in a smaller setup. This rather seems to be an inrush current.

Is it possible to generate a constant 16kV with a short leading edge? I guess you'll see a high current peak falling to a much lower constant value.

But as said, also check your equipment and make sure it doesn't affect your measurement. (For example, use a much thicker central wire to prevent corona discharge and compare)

The differences are not unexpected and appear to be linked to the initial conditions of the 2nd pulse being substantially different than for the first.

The difference in conditions and response can be seen by examining each of:

It should be possible to model the actual 2nd pulse initial conditions to obtain a better 2nd pulse performance estimate.

It may be possible to waveshape or damp the post pulse behaviour to reduce negative initial conditions for the 2nd pulse.

The current ratios appear to be about 6.6:4.6 = 1.41, which is far less than "almost twice" (even for an engineer :-)). Add the effects if oscillatory energy from the 1st pulse affecting the 2nd (see below) and the fact that there is some variation is not unexpected.

The fact that the results are essentially the same with a long duration between pulses (Trepetion >> tpulse_width) is what would be expected for independent pulses.

When pulses are in close time proximity an 'obvious' thing to do is to see if there are any measurable differences in the environments and initial conditions which the two pulses experience. A look at your example graphs of two close spaced pulses show that the first pulse produces very substantial decay effects which have not reduced to probably insignificant levels when the 2nd pulse is initiated.

In the diagram below the prepulse conditions at E for P1 are clearly different in both voltage and current than at C for P2.

It is uncertain what the effect of the substantial current dip at C (about -12A) has on the system. This is replicated at B to allow comparison with the peak of P2 current. It can be seen that the duration x current area of this dip is about double that for the equal amplitude portion of the P2 peak.
Without a far better understanding of the system and of the cause of these oscillatory variations it is uncertain what the energy content is in each case and how these affect the waveform - but it makes it highly likely that significant affects will occur.

It can be seen that the current crosses zero at about the time that P2 commences and so could be argued that the starting conditions for P1 and P2 are rthe same (0 Volts, 0 amps at startup). However, P1 experiences an unitial current peak in the 1st 15 or so ns, reducing to a small negative peak and then a moderately steady rise to full peak, with only very minor indications of oscillation (eg very small dip at 25 ns).

I'd most expect an early oscillatory pattern to be evident with decaying effect for the whole of the rising pulse edge. That it starts with one substantial peak-dip and then vanishes suggests that some very strange or at least non-linear or time variant things are happening. eg the first peak may be due to a reflection (about 8 ns start to 1st -ve zero crossing (suggesting a significant conductor length), or perhaps gate ringing on the triggering switch FET (if the original method is used) or ... ?

Further, at the end of P2 there are very substantial oscillations extending off graph (~= 150 ns). A large dip is followed by a peak at about 120 ns after the P2 peak. This post pulse pattern is quite unlike that seen in your well-spaced pulse example.

It is clear that P2 is not just lower in amplitude but different in how it interacts with the overall system. It is possible that a formal modelling of an isolated (P1) pulse to allow proper initial conditions to be set for P2 will give a better indication of what can be expected. 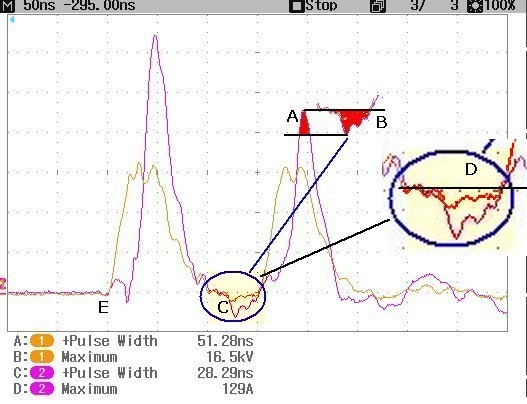 Not the answer you're looking for? Browse other questions tagged voltage current discharge corona or ask your own question.

1
Electric field in ionization area of a corona discharge?
1
Lithium Ion voltage during discharge
0
Question about a high voltage setup/scenario
1
PSPICE simulation of capacitor voltage and current disagrees with math
2
Corona discharge insulation
2
Crockcroft-Walton Voltage Multiplier Large Voltage Loss
3
Calculate capacitance value and voltage rating in the event of ESD pulses
1
How to calculate the discharged current of a capacitor from the discharge curve?