I am researching dc motors to replace the 25mm 6V 1/35 gear ratio dc motors that I have running on a mecanum wheeled chassis. The options I have found on sites like Pololu give the option of low power or high power dc motors and I do not understand the difference, nor do I wish to spend $80 dollars to order the wrong thing.

So, if anyone has any experience with driving (60mm) mecanum wheels or can help me out with general understanding of the difference in dc motors and their applications, I would greatly appreciate it.

The biggest differance comparing the datasheets you provided would be the Current they can take and the speed/power it can generate. Now in your case I believe it depends on the speed/power/etc of the application you are using.

The key is in here:

Now which one you would get depends on the speed you need/etc which are written in the key statements shown above. That is as much info I can extract without additional information on your application.

To an electrical engineer it may seem obvious from the specs, but you may be confused because no power ratings are provided and the designations 'High Power' and 'Low Power' are not explained. To understand the differences you need to know that,

So the 'high power' motor can draw more power than the 'low power' motor at the same voltage. But is this what they mean by 'high' and 'low' power? Their customers are probably more interested in how much mechanical power the motors can produce, rather than what electrical power they consume. This information is not provided either, so we will have to analyze the specs to determine which motor is truly more powerful.

At no-load (free running) a DC motor produces maximum speed, but no power because torque is zero. At stall it produces maximum torque, but also no power because the speed is zero. Maximum power output is achieved at 50% of no-load speed and 50% of stall torque. A typical graph of speed vs torque, current, power output and efficiency looks like this:- 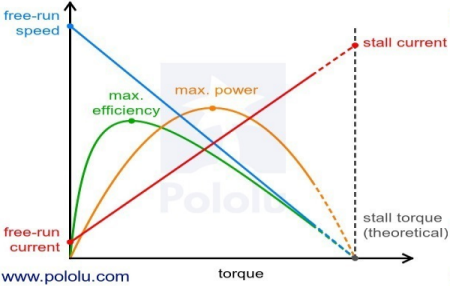 Clearly the 'High Power' motor is capable of a propelling a larger vehicle at higher speed. However its minimum current draw is over twice as high so it might be less suited to a smaller vehicle, and the stall current is much higher so you may need a more powerful speed speed controller and battery.

Not the answer you're looking for? Browse other questions tagged motor dc or ask your own question.