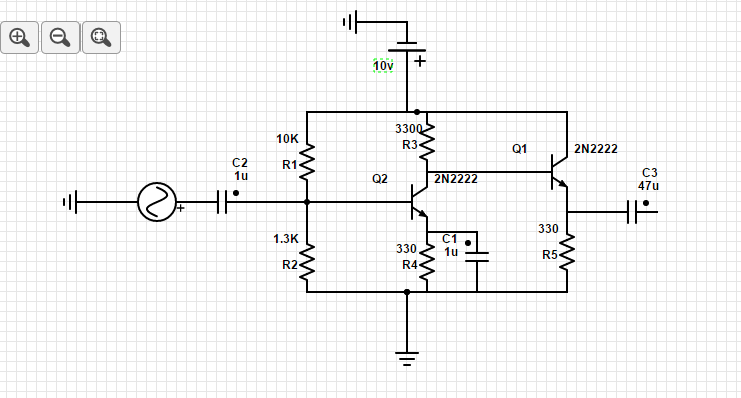 I'm trying to drive a speaker from the 47u capacitor , it seemed to be working fine and the volume scales well but when it comes to human voice , it adds this weird bathroom effect with some poor performance when it comes to high frequency/low volume . There is also some distortion

It weirdly enough , works fine when it comes to instruments (that or I have pleb ears )

What could be the cause of this ? Sorry if there's any glaring mistake but this has been bugging me for quite some time .

You are going to have significant problems driving a low impedance speaker such as 8 ohms. To produce (say) 4 Vp-p across it requires that the peak current is 250 mA. This has to be delivered by the 2N2222 transistor on one half cycle of the waveform and by the 330R resistor (R5) on the other half cycle. Clearly, trying to take 250 mA through a 330R resistor needs a forcing voltage of at least 83 volts but you only have a 10 volt supply! So, my recommendation is to massively reduce R5 or preferably, use a push-pull output stage.

Given that the current gain of the output transistor might be 100, you will need to put at least 2.5 mA peak into the base but, taking 2.5 mA through R3 is not going to work because 8.25 volts will be dropped by it. This a similar story to that of R5 mentioned above.

Now, when 2.5 mA is asked to be drawn through R3 it will drop about 0.55 volts and much more easily drive the final transistor Q1.

For the same reasons as above, you will need to reduce R1 and R2 because Q2 requires a quiescent current of 25 mA and, assuming it has a current gain of 100, its base will need 250 uA. The generally accepted rule here is that if the base needs "X" amount of current then the bias resistors ought to take 10 times this current. So choose R1 and R2 such that about 2.5 mA flows though them.

The other problem with distortion is C1 across emitter resistor R4 - it will make the output shape (if fed a sine wave) asymmetrical. This might catch you out later so please be aware of this.

I would also strongly urge you to use LTSpice (a free sim tool) to develop your ideas because its analysis of this simple problem will be more accurate than what I can do with pen and paper (no access to a sim today).

The 47 µF cap (C3) in series with a 8 Ω speaker forms a high pass filter with a rolloff off 420 Hz. That's the point at which the volume is already down by 2, and it gets lower inversely proportional to frequency below that. The reason "instruments" sound better than voice is because voice has more frequencies below this point.

However, that's only one problem of many with this circuit:

There should be a decent size cap across the power supply, and the supply to the early stages filtered to protect them from noise on the supply anyway.

This is now the second overall high pass filter, both together making "voice" sound a lot worse than "instrument".

Overall, if you really want to drive a speaker, ditch this mess and use a circuit intended for that. Driving a speaker isn't as simple as slapping a cap on the output of a low power amp, like what seems to have been done here.

Not the answer you're looking for? Browse other questions tagged transistors amplifier audio or ask your own question.