Is the frequency accuracy of this MAX7373 oscillator within tolerance?

I then attempted another timing method within the microcontroller and had the same results. I decided that my 8MHz clock must be going a little faster than 8MHz. I then took the oscillator to the oscilloscope and was able to confirm that my clock was operating at 8.09MHz.

So my question: is this performance typical, or in range for this oscillator? I notice that the data sheet specs the oscillator as 8.00MHz, which seems to suggest that my oscillator is operating at the worst possible rate for its tolerance.

Furthermore, why exactly would this oscillator be performing so poorly? I thought MEMS oscillators were often considered superior than cap/crystal resonators? Thoughts?

The answer is behind the characteristics: 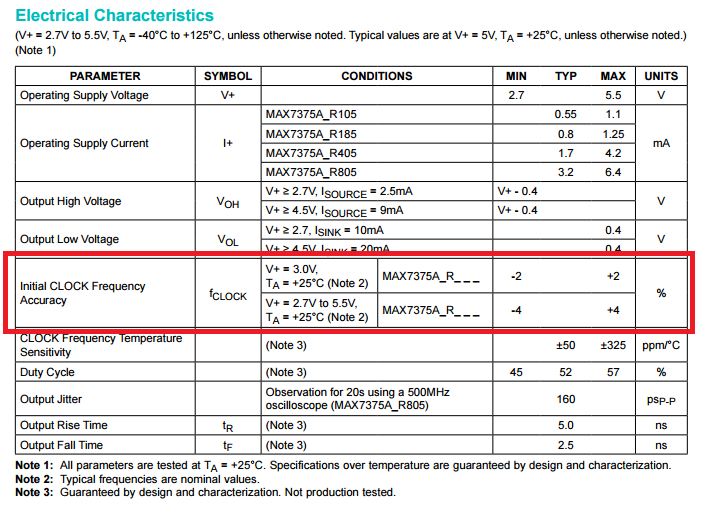 Not the answer you're looking for? Browse other questions tagged oscillator mems or ask your own question.

3
Can I dynamically change the input clock frequency of the AT91SAM3X8E?
5
Can you identify this crystal oscillator?
0
CMOS vs LVDS oscillator
0
Can one always drive oscillator inputs with a single-pin oscillator output and bypass the integrated feedback circuitry?
6
How does the negative feedback in this oscillator work?
1
Operating frequency of microcontroller PIC18f4550
7
pic32 maximum external frequency while running from internal 8MHz RC oscillator
1
PIC16F18855 runs at half the clock frequency when I turn it off and on too quickly
1
Does this clipped-sine oscillator need a buffer?