Triac getting current from gate

I made this circuit to power up an ac appliance using a weak mecahnical switch: 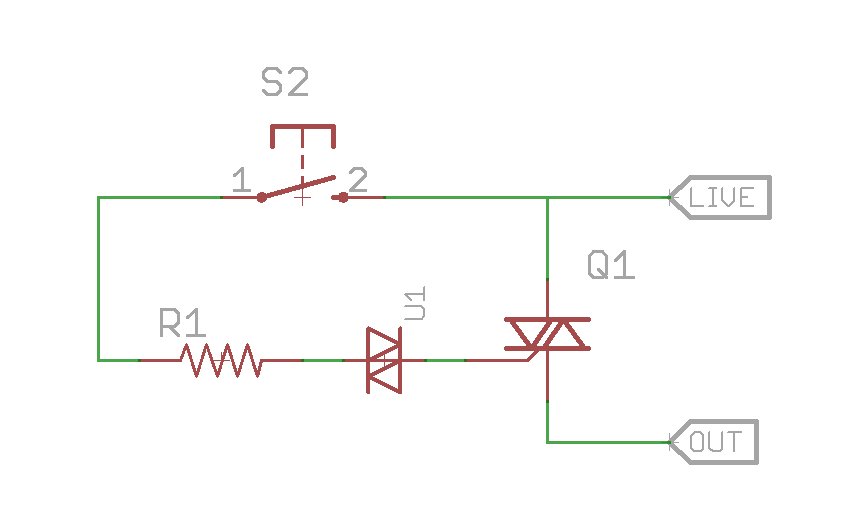 The appliance connects between OUT and NEUTRAL (not shown).

While testing, I Disconnected LIVE from MT2 of the triac and connected it directly to left end of R1 and to my surprise, the load got powered up. Resistor was heating up as well as expected.

Is this an expected behavior? How can I safeguard my circuit from such accidental connections? Will increasing the value of R1 be enough?

If the triac does not turn on or the connection to MT2 is broken the resistor will heat up. Power will be >10W on 120V or >40W on 240V, so more than any small resistor can handle.

By the way, your diac is doing nothing useful- only increasing the electrical noise and reducing the voltage to the load somewhat.

Also the resistor value is rather high, again decreasing the load voltage and making it more asymmetrical (DC component), which can damage some types of loads (motors, compressors, transformers etc.)

A triac 'static switch' normally would comprise just the triac and a resistor of around 100-200 ohms. The resistor can be expected to burn up if the triac fails to trigger (eg. shorted MT1 to gate) or the MT2 connection is broken, so allow for that to happen safely, by using a flameproof resistor and ensuring it can't cause anything else nearby to burst into flames.

You should change also MT1 and MT2. MT1 should be connected to Live as MT2 is connected to load. Dont leave MT1 as floating.

I have found a LOT of examples on the internet of triac gate driver circuitry that DOES NOT WORK. After a lot of trial and error, I came up with this circuit that DOES work:

The important thing to note is that the resistor is connected to the top of the load... the load drops most of the power, so you don't need more than a 1/4 watt 300 ohm resistor. I have controlled the opto-isolator with a microcontroller providing on/off and dimming functionality. Im sure you could easily put your switch on the 5v side of the opto, or if you are really living on the wild side, eliminate the opto all together!