How does USB Power Delivery work with voltages above 5V without damaging 5V peripherals?

I have a Qi wireless charging pad for my phone, powered via a micro-usb port. The markings on it indicate that it will accept the typical 5V that nearly every USB port provides, or it will accept 9V for "fast charge".

I was under the impression that USB standards allowed for no more than 5V.
My research shows that USB Power Delivery has several profiles (up to 20V), and Revision 2.0 Version 1.2 includes a 9V profile.

Now I'm wondering: How can voltages above the usual 5V be provided without worry of damaging an expensive phone when connecting them directly (no wireless pad)? If things are running at different voltages, wouldn't that cause an issue?

In this example, 9V is used for fast charging, but could that 9V be sent to my phone? Do phones have a safeguard for this? The USB standard allows for up to 20V. That's a lot when expecting only 5V. Some "dumb" devices are powered directly off of USB, like cheap LEDs and fans that have no IC. Surely they would blow upon 20V!

I'm guessing there is data exchanged between the power source and the peripheral, ultimately telling the power source whether or not it's okay to provide more than 5V. Some USB charging cables don't have data pins though, which can allow for faster charging. In this case, it seems that not having data pins would be a restriction. Maybe the power source would have to default to 5V?. Unfortunately I cannot find an explicit protocol/explanation of how the different potentials are managed.

Your initial guess is correct, ICs such as the TPS65982 handle the negotiation of power, and that one in particular handles the entire voltage spec of 5-20V.

For USB-PD through micro-usb, it needs to be done through a PD aware cable. USB-OTG added an additional pin to the micro connectors (the ID pin) which is left floating on the micro-b connector. A USB-PD device uses that pin to negotiate the power profile determine if the cable is PD aware. 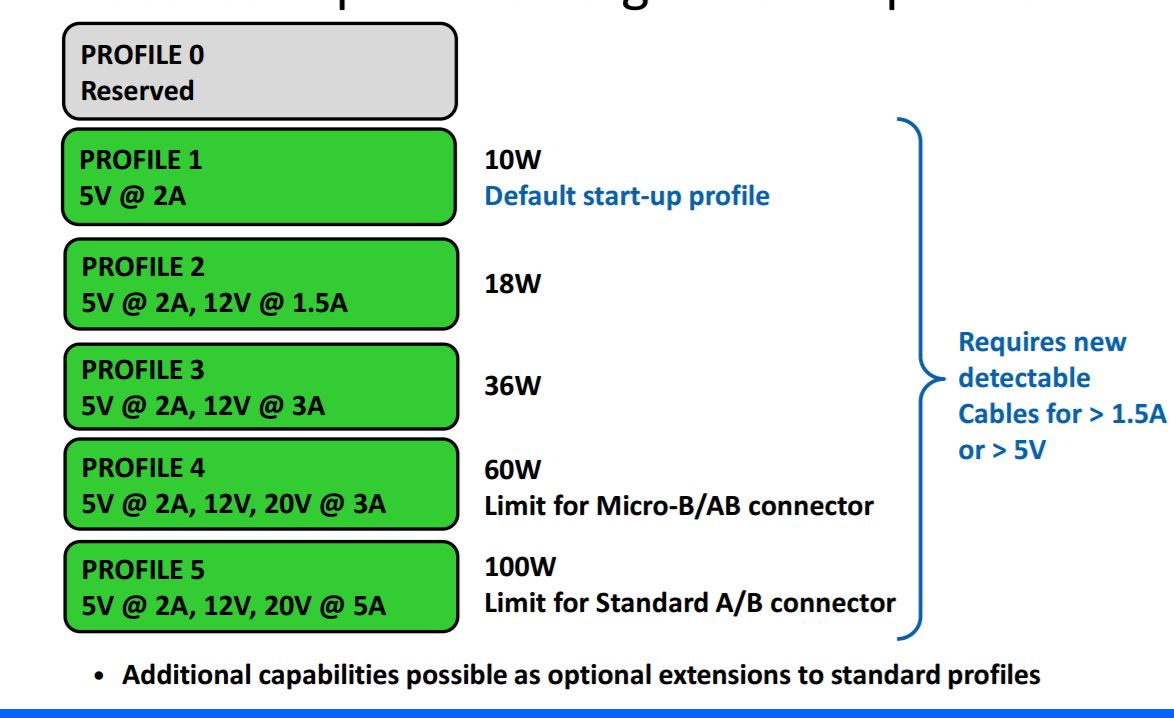 As the sidenote says, if you're using a 'dumb' cable (even if it's connected to a smart device), then all you'll get is 5V/1.5A.

Once a smart device is connected, however, it can negotiate a higher PD profile through the Vbus by using the PD communication protocol, which is a 24MHz BSFK protocol.

The PD 2.0 specification is a bit different. The fixed power outputs of 1.0 have been deprecated, and there are 4 nominal voltage levels with varying current abilities: 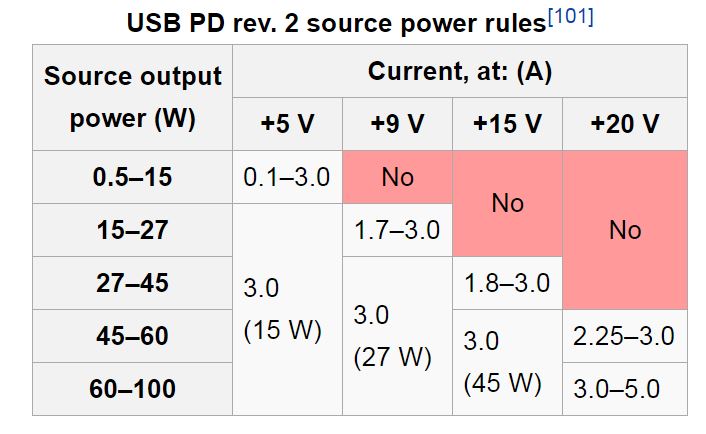 It has also been updated to include type C connectors, which as you mentioned have the CC pin, and use BMC encoding to communicate on that pin. It is important to note however that this protocol is backward compatible with the USB 2.0 devices that implement 1.0 as well. 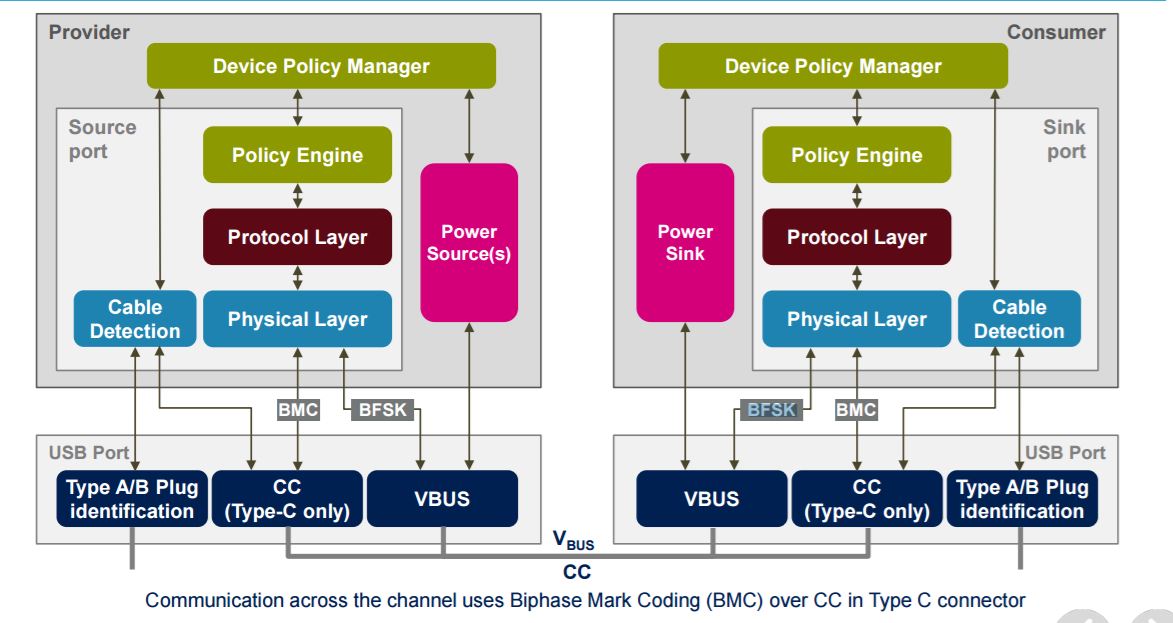 Adding new information based on Ali Chen's answer. Your device may make use of the Qualcomm Quick Charge protocol, which uses the data lines to negotiate. Specifically, the portable device puts a pair of voltages on the D+ and D- lines, and the Quick Charge IC applies a different voltage depending on whether or not the IC is configured to connect to class A or B devices. For Quick Charge 3.0, the negotiation table is as follows: 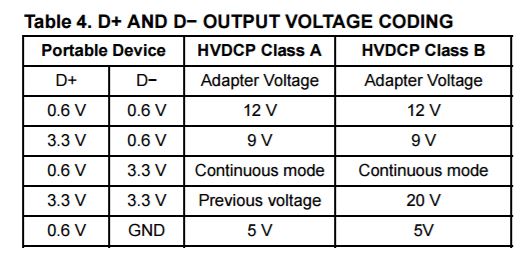 To determine if this applies to you, simply connect a USB cable that does not have data lines inside to your wireless charger or to your phone. If it reads 9V, then it's not using the Quick Charge protocol to negotiate voltage (or, at the very least, it's not negotiating over the data lines, since there could be other protocols in use). Also, and probably more effective, You could also put the D+ and D- lines on a scope, and observe the voltage changes. Here is also a state diagram for reference, taken from a Quick Charge 3.0 IC, the NCP4371: 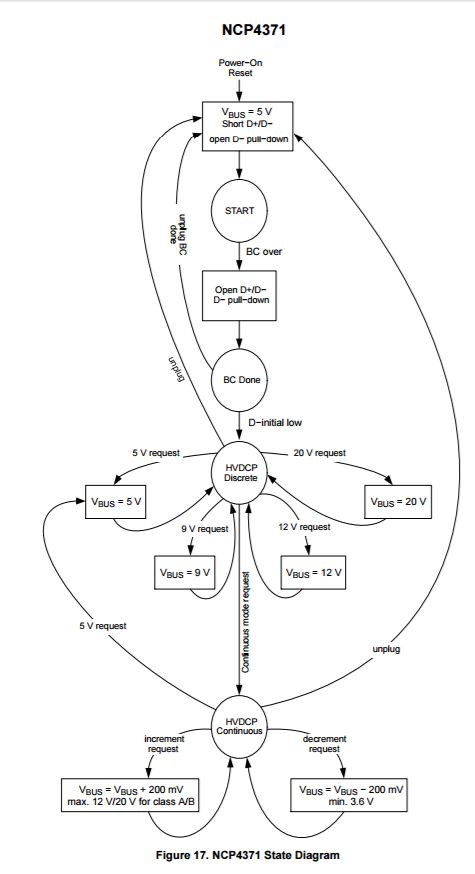 For the sake of accuracy, I feel that I need to refine a bit the BigHomie answer.

The main worry of OP is about not damaging devices that do not tolerate VBUS above 5V. The answer is simple: by default, a USB port initially provides the same safe 5V power, and nothing more.

The higher voltages and capabilities of power providers are only available upon mutual negotiations between a device (consumer) and a port (provider). If the device does not support this intelligence, no elevated power will be delivered, and no problem will occur. [ADDENDUM: details of identification of Power Delivery capabilities and mechanisms of negotiations are cumbersome and still evolving, and are beyond the scope of a single stackexchange article]

Now about the current state of PD: unfortunately, specifications appears to evolve slightly faster than wikipedia contributors bother to check. In the new Rev.3.0 of PD specifications (V1.0a, March 25, 2016, + ECNs of August 2, 2016) the BFSK negotiations over VBUS are depreciated.

In reality, the PD v1.0 with PD negotiation over VBUS with BFSK data coding did never take off, maybe one or two devices were ever made in the entire world. So, currently going forward, the only way to negotiate Power Delivery is through Type-C CC pin.

[ADDENDUM2: there are also proprietary types of PD, like Qualcomm "Quick Charge", protocol details are unknown]

[ADDENDUM3: upon further research out of sheer curiosity, it looks like the QCOM QCharge technology already captured most of the mobile market, while the official PD standard is lagging way behind, and could be a flop, as all previous BC1.1, BC1.2, PD1.0, PD2.0 "standards" were]

Not the answer you're looking for? Browse other questions tagged voltage usb or ask your own question.

0
What happens when devices request different voltages from a USB hub?
6
Does USB Power Delivery handle USB cables that are not PD-aware?

0
How to use an USB port with 3.3v power output?
5
Is it generally safe to use any USB charger with any USB device? How does device know what current is charger able to provide?
5
Can Type-C device be configured as "Sourcing Device" without Power Delivery protocol?
1
Does USB power delivery support arbitrary voltages?
2
Does USB-A connector have the pins required for USB power delivery (PD)?
2
USB Power Delivery over Type-A connector