Should there really be 1 MΩ resistance between an anti-static wrist strap and a pc?

My previous question: what exactly is grounded through motherboard standoffs?

The answers suggest that a PC case is grounded in 2 ways:

Q1: Is this correct so far?

OEMs like DELL advise to "touch an unpainted metal surface." Thus, when you touch the case, you are directly bonding with:

But when you attach your anti-static wrist strap to the case, there is a 1MΩ resistance between you and the case, because of the 1MΩ resistor in practically every coil cord that comes with a wrist strap.

So, apparently, touching the case, without a resistor, is fine. But a wrist strap should be bonded through a resistor. That's contradictory.

Q2: Can bonding to the case, through a coil cord without a resistor, do any harm to hardware components?

The 1meg resistor is needed to safeguard the user from faults from other equipment connected to mains earth.

Keep in mind that the wrist strap is a permanent connection to the electric system of the building. If another piece of equipment experiences a fault, there could be a big fault current through the mains earth wiring system. That means that, in unfortunate circumstances, the mains earth terminal could reach a dangerous potential. In this case, the 1Meg resistor limits the current from the earth wire trough the user to a safe limit.

See this Wikipedia article about Earth Potential Rise, for example.

The resistance of the Earth is non-zero, so current injected into the earth at the grounding electrode produces a potential rise with respect to a distant reference point. The resulting potential rise can cause hazardous voltage, many hundreds of meters away from the actual fault location.

Therefore the earth wiring system (and your wrist), due to its low resistance, is roughly at the same potential of the point where the fault current enters ground, whereas your feet (several hundred meters away from that point) are at a lower potential. Without that 1Meg resistor: ZAPP!!!

EDIT (to address downvoting and clarify my answer)

Since my answer has attracted a couple of down-votes and some criticism in the comments (not necessarily related, at least not apparently) I feel compelled to clarify something, but I'd like also to remind downvoters what down votes are for: for answers that are not useful, not on topic or plainly wrong.

First: I was told that regulation doesn't require the 1Meg resistor for the reasons I stated. My answer: I never stated that my explanation was related to some regulation (I didn't even know there was a specific regulation for wrist bands - BTW, I'd like to see some reference), but I concede I could have been more explicit.

Second: As I wrote in a comment, I admit that my scenario is less likely than, for example, touching a live wire or an ESD event whose rapid discharge could cause issues. Nevertheless, as someone said in a comment, You only die once! Faults in electric systems do happen, and often they are not under your control, so no level of care from your side could prevent them, you can only (try to) prevent the consequences. Hence the scenario I depicted is, IMO, well worth considering (so it is on-topic and it is useful). Moreover, the question in the title is Should there really be 1 MΩ resistance between an anti-static wrist strap and a pc?, not something like Why regulations impose a resistor there? or What's the most likely scenario that resistor is put there for?.

To further make my point you can see this article on Wikipedia about Stray Voltages. Not everything is directly related to what I'm saying, but the part on Neutral return currents through the ground is. Excerpt (emphasis mine):

Stray voltage became a problem for the dairy industry some time after electric milking machines were introduced, and large numbers of animals were simultaneously in contact with metal objects grounded to the electric distribution system and the earth. Numerous studies document the causes,[11] physiological effects,[12] and prevention,[13][14] of stray voltage in the farm environment. Today, stray voltage on farms is regulated by state governments and controlled by the design of equipotential planes in areas where livestock eat, drink or give milk. Commercially available neutral isolators also prevent elevated potentials on the utility system neutral from raising the voltage of farm neutral or ground wires.

(I didn't have the time to search for an article involving grounded humans instead of grounded cows, but you get the point.)

Bottom line: connecting a human body to any low-impedance path that could possibly rise in potential is dangerous and life threatening, so proper safety measures should be in place.

You have two questions which you think are related since they both concern ground connections. However the questions are not related !

Q1) The actual ground connection, where the return current from the supply flows, are the black wires on the ATX power connector. Indeed the chassis is also connected to the motherboard via the screws but this connection is not essential for normal operation. You can also use a motherboard without this connenction, for example when testing it before mounting in a case.

But the ATX connection is essential. The ATX power supply then provides the connection to the ground in your mains sockets.

So the 1 Mohm resistor does not hinder in any way the ESD protection !

It does provide extra safety. If that 1 Mohm resistor was not there and you would touch a live voltage (like mains voltage) a current will easily flow through you and the wristband. The current can then reach dangerous levels ! That 1 Mohm resistor in series increases the resistance of this path to a safe level. If you touched a live wire you could feel a "tingle" but the current cannot reach a dangerous level due to the resistor.

So: the resistor is a safety measure to protect the user, which is you !

The reason for the acceptable range of 1M to 10 M is to current limit static discharge for wrist straps. in addition it reduces current to live voltages.

*Although Vac line voltage both IEC/UL acceptable leakage is 500uA for line filters etc, so one could reason that the wrist strap could be reduced to 240k with the same safe limit, but not for EOS sensitive parts. So you could say for both reasons, but the primary reason for protection is the EOS sensitive parts, otherwise why not 10M? or 22M or 50M? * That would be safer for humans, but that is not the main purpose of an "EOS protected workplace", but workplace safety is also important.

For Electrostatic Over Stress or EOS prevention all surfaces must be "Static Dissipative" to prevent rapid discharge.

The other reason is to reduce the potential ionization discharge time from 5-100 picoseconds that creates E-Field transients faster than the ESD diodes can response when CMOS inputs are connected to long cables (antenna). 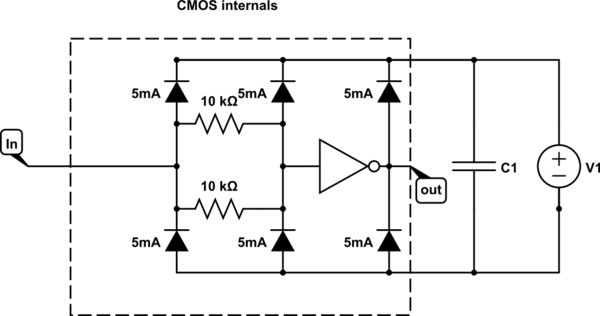 For the same reasons flooring and work surfaces need to \$10^{10}\$ Ohms per square.

So effectively any length can capture some of the transient Field and thus is EOS unsafe. We rate parts only with 100pF or 300F for Human finger capacitance due to the tiny area of contact. But in reality, between two hands we can measure with an RLC meter and "good contact area" with probes 100x more capacitance easily. Thus ESD generated by walking on dry dusty floors or hotel nylon carpets with key can generate a healthy arc of 30kV or ~3cm and a good zap and radiate within the entire room. Due to RF properties & physics, one cannot guarantee to zap any unprotected Semi, nor can you guarantee that it is not "wounded" a similar breakdown ratio in kV/mm now attenuated to small levels and distances but only slightly higher ratios of mV/nm in charged dielectric junction BreakDown Voltages (BDV) spanning xx nm.

This is also a future limitation for Moore's Law Lithography shrinkage in CPU's. If the junctions got much smaller, it can approach BDV levels of Silicon in xx mV/nm ratings.

Most MOBO's use insulated standoffs, and a few use conductive, so Ground connection is thru DC plug to ATX PSU to case ground, where ground is local reference to case. WHen connected to Power outlet, the local case ground is connected to earth ground thru household wiring, but very inductive , so the case is the best shield.

( except for long IO cables , special case beware they can carry ESD charges from tribo-electric friction)

- example When I was TE Mgr, technicians would drag 10m SCSI cables on dry concrete floor ( with dust) and connect to towers in Final Test and blow SCSI drivers from ESD, until we trained them to touch Connector shell and frame before connection.

"Touching with bare hands" will MOMENTARILY DISCHARGE your body PRIOR to handling any static-sensitive objects (boards, chips, etc.) Using a wrist-strap will CONTINUOUSLY drain any static charge and keep you safe from zapping anything you touch.

If you could do whatever with one hand, then touching the case of the computer accomplishes essentially the same thing as using a wrist-strap except that YOU are NOT protected from electrocution as you would be from a proper static-dissipative wrist strap.

11
How would I test the continuity of an anti-static wrist band?
3
What is a single socket to ground-only plug adapter for electrical outlets called?
0
Earthing Bracelet safety
1
Dangers of ESD wrist wrap / mat / ground Plug Adapter in an Apartment building?
0
Is 'grounding a desktop PC via 1MΩ resistor' unsafe when working inside the case?