I have various pieces of equipment that all need to be connected to GND (Chassis GND). The issue I'm having is that I'm connecting an ADC card inside a computer through a metal box with custom electronics that connects into a cryostat (metal shield).

So I'm thinking that I need to break the shield somewhere on one of the cables. The questions is where? The electronics are amplifying a rather small signal from the cryostat so I'm guessing that I want to try and keep that shield connection continuous. I was going with breaking the shield at the box on the cable that runs to the computers ADC. Is this a good idea? Should I not worry if the Computer GND and cryostat GND are pretty much connected to the same power strip?

Note that the electronics GND should be floating from the Chassis/building GND. 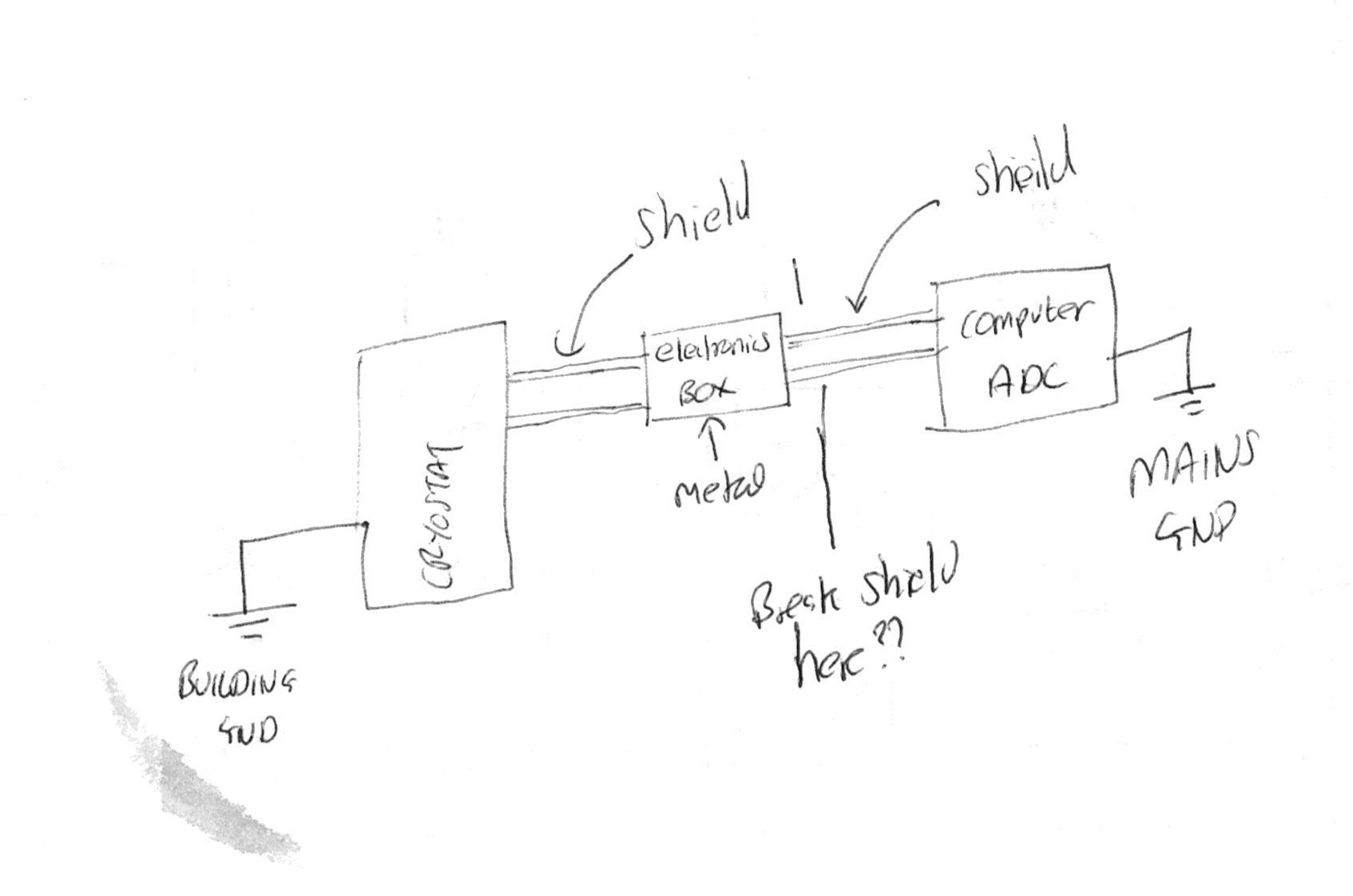 Yes, it sounds like (a little confusing) you have a ground loop problem, and yes they can matter, especially when trying to measure small analog signals. If all grounds tie back to the same outlet strip via relatively short line cords, then it would probably be OK. However, you say that this cryostat thing (whatever that is) is connected separately to building ground, so that is obviously not the case and it's confusing therefore why you brought it up.

In general, it's good to convert analog signals to digital as close as possible to the source, then ship around digital signals. Those are much easier to isolate, like via opto-couplers, pulse transformers, radio, etc. In other words, a old fashioned A/D card in the computer is not the best overall architecture from a system level point of view.

However, look at the A/D card carefully. Most likely it can be configured for single ended and differential operation. This is a case where you want differential inputs. The cryostat thingy may produce a ground referenced signal, but take its ground and output signal as being differential. This will essentially subtract the ground offset from the signal before converting it.

This trick will only work up to some frequency, probably a few kHz or low 10s of kHz. It should work pretty well in subtracting off any ground signal due to 60 Hz or 50 Hz power line return currents accross ground paths in the loop. Sharp common mode spikes can still confuse the diff amp in the A/D and show up as noise in the final output. It's worth a try though. If it's not good enough, go back and convert to digital at the sensor, then opto-isolate the digital telemetry signal.

There is a tutorial on ground loops and other forms of electrical interference at the Loop Slooth web site.

These issues are also discussed in a Review of Scientific Instruments paper (also at a link on the website).

The tutorial explains how ground loops result from the distinction between Faraday's law and Kirchoff's law (electronics is based on Kirchoff's law which is valid for DC only, whereas the real world of time-dependent currents involves Faraday's law). It also discusses the relation of ground loops to other forms of interference such as inductive coupling, electrostatic coupling, and radiative coupling.

In an ideal case, if there would be only one pair of wires (connected to a power source) closely located to one another everywhere, the current loops would be the same and induced EMF would be the same. Thus, measuring voltage difference between the wires at any point would produce the same result whether with a magnetic field or not.

However, in practice this is rarely the case, wires don't go in pairs and they don't go always go close to one another. This way, noise appears (EMFs induced in different loops are different).

From practical standpoint you can do the following: a) ensure all wires go close to one another as much as possible (no big loops of isolated wires are formed). b) ensure there are no time-varying magnetic field sources (noise aggressors) nearby.

In your case, the two devices have different connections to ground (mains gnd and building gnd), so, likely, a giant loop is formed, which isn't good.

The actual noise level will depend on parasitic magnetic fields surrounding your setup. If there are no strong sources of time-varying magnetic field in your laboratory, the ground loop may not be a problem.

Breaking a shield may not be a good choice because:

1) it will change impedance of the cable which can be troublesome at high frequencies.

2) The receiver's gnd will float relative to the driver's gnd. Any stray current appearing at the receiver gnd will affect the signal.

Not the answer you're looking for? Browse other questions tagged shielding ground-loop or ask your own question.

8
Proper shielding techniques for chassis grounded equipment located 30 feet apart
2
Connecting the Shield of a strain gage cable connector to PCB with ADC
4
How to maintain EMI shielding whilst penetrating the shield with cables?
15
How to Connect USB/Ethernet Shields to Chassis or Digital Grounds
6
What constitutes a "sufficient" ground?
4
ungrounded chassis shielding
2
Shielding and Ground Loops - RF panel jacks for GPS
1
Shielded Ethernet Cables in Office Buildings - Ground Loops?
7
Ground loops in a PCB with large hole in the middle
0
Noise from switch mode power supply and ground loops