What size wattage resistor do I need for this project? Does resistor wattage matter in this case? (Wiring schematic picture included!)

What I am doing is I have cut off some bulbs off a string of incandescent Christmas lights. However, now I need a resistor for it so it doesn't blow the bulbs out.

Without a resistor, within a few minutes it blew all the bulbs on that half of the string, and now I understand the reason is because the bulbs I removed caused a greater load to be placed on the remaining bulbs.

I am almost done, and I even soldered the resistor onto the string properly.

However, because of the following two factors, I believe it is the wrong resistor, perhaps because I need a resistor to handle much higher wattage, per my speculations. * resistor got too hot immediately * bulbs were too bright like without any resistor, indicating the resistor was not taking the load as expected.

Now, keep in mind that not only am I just trying to have good Christmas lights but also I am doing this as a learning experience. Obviously I could just take it down and use an unmodified string, but I want to learn so that is why I want to use the resistor.

Here is my diagram: 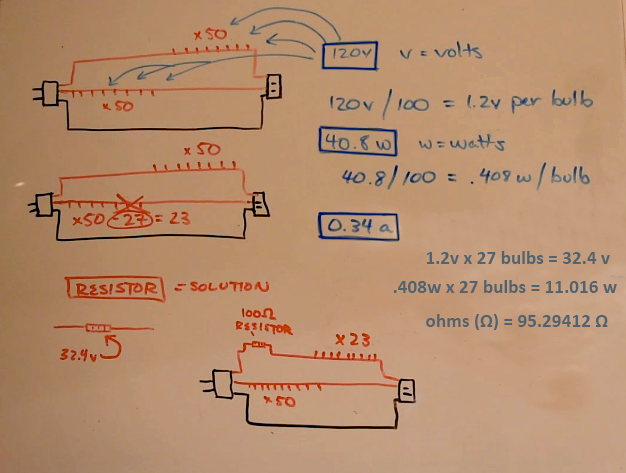 You can see in my diagram how these lights are wired.

Ok, so according to the radioshack guy, all I needed was a 100 ohm, 1/8 w resistor, he said there is no need for a bigger wattage.

So I went and soldered on a 100 ohm, 1/8 watt resistor, but I noticed that first the bulbs were too bright like before, so it seemed like the resistor wasn't taking the load as expected. Second, the resistor got immediately so hot it burned a hole through the electrical tape within seconds.

So I unplugged immediately and now I am researching the correct solution.

I am wondering is if he had no idea what he was talking about and if in reality, I needed a 100 ohm, 11+ watt resistor?

Also from searching the web I read that a standard is to get twice the wattage of your needs for the resistor.

I have also already done all the connecting, testing and soldering. I just need to know which is the correct resistor to use for my project. Once I have that I can just attach it in place of the wrong resistor and then everything should work!

Please let me know if I need the 100 ohm, 20 watt resistor, or if not which is the correct resistor.

Ok, so commentors are saying that due to the KVL law of physics, actually it is not 120v split evenly into both strings.

Instead, it is 120 v into EACH string. This changes things.

Also another answerer said that amps is split among the parallel circuits. So looks like I had it backwards originally.

So in this case, does this mean that I actually need:

(~ means here "around" since an exactly 381 ohm resistor doesn't exist.)

You're on the right track in two regards; your calculations headed in the right direction, and the Radio Shack guy doesn't know what he's talking about. A general good start in thinking about electrics is to consider vague magnitude. You have a project dealing with 40W here. Does 1/8 of a Watt sound like the right sort of answer?

The bit of calculation you need here is the power dissipation in the resistor. A series resistance circut (when resistors are connected end to end, "in series") is pretty simple. In this case, we know that the current flowing in the circuit is 0.335A or so. We also know that the resistor you are using is 100 Ohms.

The power dissipation in a component is Volts X Amps. Combining this with Ohms Law, we can show that this power is also Amps squared X the resistance in Ohms.

So the vague magnitude speculation actually gave you a pretty good answer, calculating it we find a 20W rated resistor will comfortably handle this load. And not to trust the guy in Radio Shack.

edit Oh poo, I didn't realise you have two parallel strings. And now I'm typing this retraction I can't see your picture. BRB.

If your schematic is right, and I believe it is, you need 330 Ohms at 10W.
Use 20W so you're safe.
Keep in mind you're dealing with 10W of HEAT, so be sure it doesn't get too hot.
Don't wrap the resistor(s) in anything too insulating.
Protect the wiring so no one gets lit up though. Keep the resistors on the N side of the plug if you can.

If you put all those bulbs in a coffee can and lit 'em up, how much heat would you generate? You need to get rid of about 1/4 of that through your resistor, or 10W.

Not the answer you're looking for? Browse other questions tagged resistors wiring load or ask your own question.

0
Can I overload resistors when they are in parallel?
0
what wattage 10 ohm resistor needed for 330mA at 3.3v?
13
When I added a resistor to a set of christmas lights where I cut off bulbs, it gets hot. Why does a shorter string of lights not need a resistor?
1
Is a diode an effective way to replace a resistor in an application where heat should be avoided?
1
Can I add to the wire length of C9 LED Christmas Lights?
0
What exactly is a diode and how do I use it to step down voltage?
2
Converting pre-lit Christmas tree with incandescent mini-lights to use LEDs