If I plug in two separate strings of christmas lights into each other, is the voltage multipled by number of parallel circuits?

Say I plug in two 100-bulb strings in series - one into the other. Each is a series of 50 lights wired in parallel.

Would it then follow that now there are now four strings of 120v, even though only one source of 120v (the wall outlet)?

See this diagram picture I drew illustrating this: 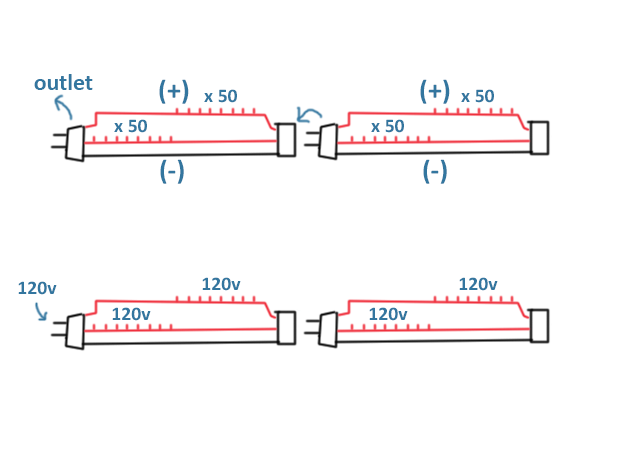 No - each set of lights still sees 120 volts, and the whole assembly still needs 120 volts.

As far as the second set is concerned, the first set is just an extension cord.

Not the answer you're looking for? Browse other questions tagged voltage parallel series or ask your own question.

2
Why does a voltmeter read lower across a load than across a supply?
3
LED wiring questions with 9v battery as power source
20
Burned out filament but the light bulb has small resistance
0
Why is this light in this parallel circuit only working in series?
1
Is this the ideal parallel circuit or is this a combination of series and parallel?
0
How are the individual homes connected in a 3 phase power distribution system (power grid) so that they have correct voltage?
0
LED light cycles on and off - Is it a heat or voltage problem?
0
LED series-parallel and parallel-series combination circuit
0
LED light bulb in series or parallel?