first post here, and quite a specific and probably incredibly basic question.

Im trying to find out the reasoning for a remark made in a college paper to do with IV characteristics of diodes.

Basically the question asks the student to draw a circuit to investigate the IV characteristics of a diode.

Now the mark scheme says that the circuit should have the diode and a variable resistor, plus a safety resistor all connected in series. A voltmeter across the diode, and an ammeter in series.

It also shows a second circuit which has the diode in a potential divider circuit set up, again with a voltmeter across the diode and ammeter in series in the same branch as the diode.

In the examiner's remarks where they discuss how students answered the question it says that "There were very few occasions where a potential divider was used even though this is best practice for obtaining the full characteristics for the diode".

My question is in this case of determining an IV characteristic of a diode, what makes using a potential divider better or "better practice" than simply throwing it in series with a variable resistor? I also don't follow the "full characteristics" part of the explanation. I see no difference in the range of results you would get in either situation...

Can any one shed some light on this?

If I've understood your description these are the three circuits above.

If the variable resistor is set to maximum then current will flow throw the diode. You won't be able to get any values of current below this so some of the IV characteristic cannot be measured.

If the variable resistor is set to zero then the diode forms a short circuit for the power supply. There is nothing to limit the current so it goes 'bang' and releases the magic blue smoke.

This works fine (you can get the IV range down to zero current). However, if you get the wiper near to the top of the potential divider there is nothing to limit the current through the diode. Once again 'bang' and a puff of blue smoke.

This works fine at all settings of the potential divider.

Sometimes this is done and often found in voltage regulators with current limiters for feedback control. 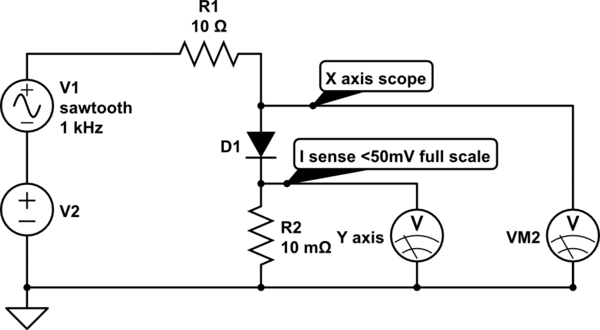 1
Soft Clipping with Diode
1
Semiconductor diode barrier potential
2
How to modify this circuit for variable clipping without affecting gain?
6
Max voltage vs current for LED
1
Relation between built in potential and doping
0
“Equivalent resistance” of diode as \$V/I\$ used to evaluate an approximation
7
1977 GE 6RS20SP9B9 - what the heck is this component?
5
Adding Diodes to Transistor Astable Multivibrator; 1N5818 Schottky diodes work but 1N4148 diodes don't; can't figure out why
0
Junction Potential parameter in Keysight Genesys