Is it possible to visualize a 2.4 GHz digital signal without an oscilloscope?

I would like to visualize the RF signal of a 6 Channel Spektrum DX6i transmitter that operates in the 2.4 GHz band, in order to visualize changes in the signal when I move the control sticks.

The Tx converts the position of the control sticks into a Pulse-Position modulation (PPM) signal which is then modulated using Direct-Sequence Spread Spectrum (DSSS) and then radiated at 2.4 GHz.

Unfortunately, according to my teacher, the equipment that we have in our University labs don't have the required performance to analyze 2.4 GHz signals, and all the inputs that I got from him were discouraging, because the oscilloscopes that can operate in such bands are very expensive.

This is an incomplete list with some equipment that is available in our labs:

The reason for posting this list is to give readers some reference. I am curious about Spectrum Analyzers and Network Analyzers because they can operate at 2.4 GHz so I have included them just in case they could be useful.

I'm not giving in yet and I am exploring other alternatives such as software-defined oscilloscopes.

But before going any further I would like to ask:

Is it possible to visualize a 2.4 GHz digital signal without an oscilloscope?

I read this question and found it useful.

According to the data sheet, the N1996a spectrum analyser has a 'zero span' mode, where you can use it as a fixed tuned receiver, and the trace sweeps in time rather than frequency, just like an oscilloscope. See page 101 of the manual N1996-90028.pdf

Set the resolution bandwidth to be wide enough to follow your signal.

If you tune it to the centre of your RF signal, then you demodulate the AM.

If you off-tune it, so that you are 20dB or 30dB down the side of the filter, then you can crudely demodulate FM. As the frequency varies, the response moves up and down the slope of the filter.

With both AM and FM demodulation possibilities, you ought to be able to get some response, whatever the original signal's modulation.

I notice the R4131D has zero span, as well as video and IF outputs, so the analyser can be used as a fixed tuned receiver, and you can display the IF or video on an oscilloscope.

There may be special modulation we don't know about, but you wont likely notice any significant change in modulated spectrum

After reading about the Receiver technology , your Pulse position servo information will be digitized and sent as DATA , therefore there is no change in your spectrum due your misleading video.

It is wideband DSSS !!! not narrow band like others.

Ignore the frequency used here just see the many harmonics that will get LPF filtered out. But this is what a crude PPM spectrum might look like before filtering., which has to do with your original video question on PPM (pulse position modulation + narrow FM) but has nothing to do with the transceiver Spektrum DX6i, which uses DSSS. (new digital technology) 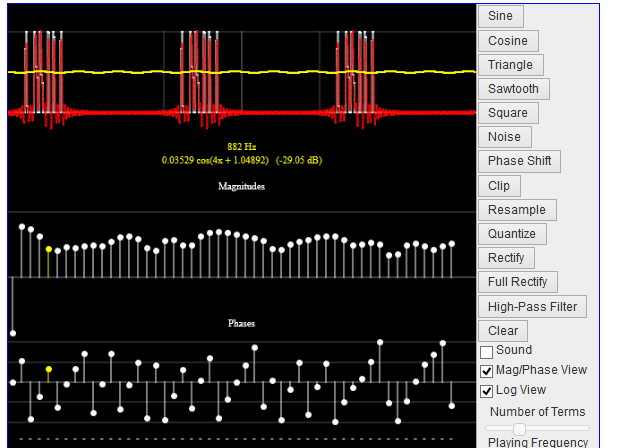 http://www.falstad.com/fourier/ < Use mag/phase and Log view and draw any waveform or change any Fourier analysis to make arbitrary waveforms with N harmonics

Conclusion: Yes you see spectrum, No you cannot tell if it changes and how much without special setup and experience to decode spectrum.

I just checked and it uses spread spectrum, so it would look like a narrow spike or wide white noise with s 20MHz BW to the unaided eye on a 2.4GHz spectrum Analyzer.

It does offer an advantage with dual path technology, a MUST HAVE for RC users with less chance of polarization blind spots otherwise known as Ricean Fading deadspots

Not the answer you're looking for? Browse other questions tagged oscilloscope digital-modulation or ask your own question.

4
What will I see in oscilloscope when attempting to analyze Bluetooth or Wi-Fi signals?