100 LED chaser with multiple LEDs on at the same time

I'm sure this has been covered but I am not finding answers to what I am looking for. Just getting back into electronics after well over a decade...so I'm a bit rusty. :)

What I need is a 100 LED sequence broken down into 20, 5 LED segments, with LEDs lit in pairs as they chase. Ideally 1/2 on, 3/4/5 off...1 off, 2/3 on, 4/5 off...1/2 off, 3/4 on, 5 off...1/2/3 off, 4/5 on. Something like that (visually represented below). Always 2 LEDs lit and 3 unlit for each 5 LED segment. I've broken out my old lab kit (was shocked at the amount of dust on it) and to my surprise I found my packet of first gen blue LEDs. I remember having to special order them and they cost me $10 each. That'll tell you how long it's been. But I have all manner of parts and was hoping that using a 555 and 4017 (I have a tonne of these) as well as some combination of transistors or inverters is what I'm looking at here. Chances are I have the parts on hand already. But I'm straining my brain trying to figure out a workable and SIMPLE circuit that can drive that many LEDs in the pattern I'm seeking. Bonus if I can regulate the speed of the chase.

Any advice, input or thoughts is GREATLY appreciated.

Finally, use an oscillator to drive the clock pin. A variable speed clock varies the speed of the chase.

Make one go at a desired rate but most crucially set its duty cycle at 40% (that's your pattern generator) and feed its output to a shift register's data input (be aware that since this duty is less than 50% you have to actually set it to its reciprocal, 60%, and then invert it).

Put the output of the other timer to the clock input of the shift register and tweak the timer frequency until it's 5 times that of the first timer or until you see the pattern/speed matches what you want.

This isn't a full answer if this is about using all the parts you already have on hand, but you mentioned an hour ago you are flummoxed by driving two LEDs in pairs. So I thought I'd start there since that's not so hard.

Look at the following schematic, which only uses four LEDs instead of five (for space-saving reasons only.) There are three input lines, each of which turns on two adjacent LEDs. This would be a 3-state case, of course. But that's one possibility.

You could also consider using two different counters similiar to (but not necessarily the same as) your 4017. If both were initialized to the same starting state, the following similarly short-handed case might look like: 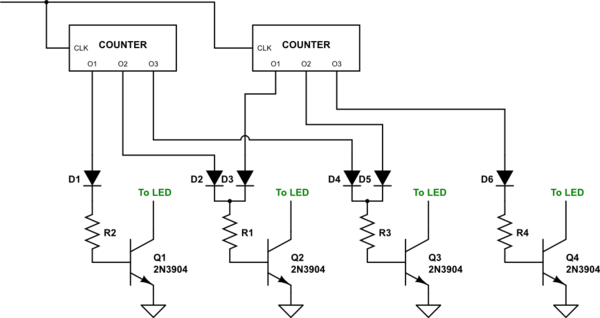 Also, only 3 states (for brevity again.) I've no idea why you might decide to go that way over the other. But you might come up with a reason, so there it is, as well.

The overall problem faced might be figuring out how to get 4 states out of a 10-state device, or to find a way to combine 10-state devices into a 20-state or 40-state situation where you could then divide that evenly back into 4 states without what amounts to blanking periods.

I'd probably sell the 4017s online in nice packages, get the money back for them, perhaps sell those all-too-expensive blue LEDs, too, and then pick up some really cheap LED modules (which can be bought with drivers included) and get a microcontroller and do it that way. More versatile for the future (and I think you'd imagine some fun ways to use that flexibility as time goes on.)

Not the answer you're looking for? Browse other questions tagged led 555 counter cd4017 or ask your own question.

3
Best way to sync LED's to light NES figures on a wall clock?
4
Rewiring USB LED lights to directly use a 5V DC-DC Converter
0
Control multiple LEDs with switches on the same circuit
0
CD4017 with multiple LEDs
1
Need help understanding PNP Base into NPN Collecter circuit for LED Array
1
led chaser with non-mechanical shut-off option
0
3 simultaneous led chaser using only 555 and 4017
1
60 LED chaser sequencer, two LEDs turn on at a time instead of one
1
Current source with multiple “taps” for driving different LEDs