Power off arduino via software

I have an arduino that is powered by a 9v block battery and enabled by a switch. I want to change the curcuit, so that when the switch is turned off the arduino remains powered until certain actions are finished, and then turn off.

However I dont just want the arduino to sleep, the power should be disconnected. This is important, because I have additional components draining power from the 5v pin (around 300mA) and I want those to shut down too.

Is there a better way than using a relay? Can I use a mosfet or something else instead of the relay?

And maybe, in the future, I will need the 9V for additional components, which should turn off too when the arduino decides to shut down. But when the relay/mosfet/..? is placed between battery and arduino VIN I can just connect those between relay/mosfet/..? and the arduino. So this should be simple.

Edit: Based on Passerbys answer I came up with this: 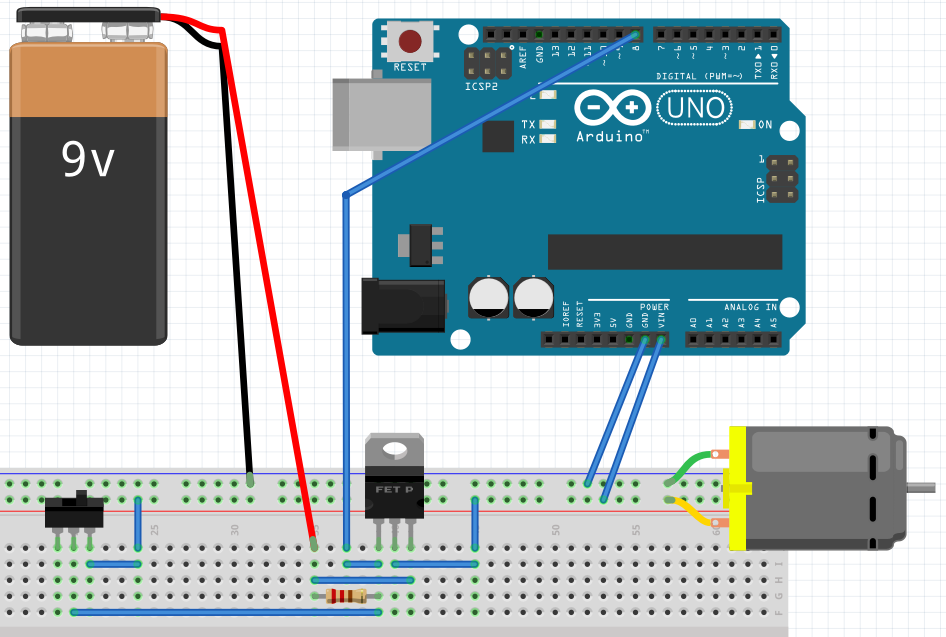 The motor is just a placeholder for my additional components that drain power from the battery and should be shut down too.

A system I commonly use: 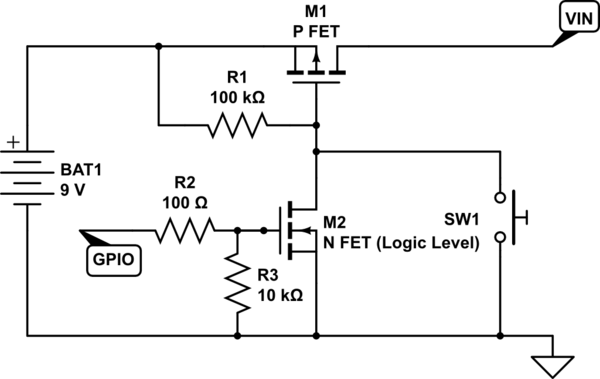 M1 is normally held OFF by R1. SW1 pull M1 gate LOW when pressed switching M1 on. That then provides power to the Arduino.

The first operation the Arduino performs is to drive the GPIO connected to the gate of M2 (which must be a "logic level" FET with a threshold low enough to drive directly with an Arduino - you could also use an NPN BJT). That then bypasses switch SW1 keeping the system powered up.

The switch can then be released and the power stays on.

The Arduino can then release the GPIO by either driving it LOW or setting it to INPUT (R3 will pull it down in that case) switching off M2 which then allows R1 to pull up the gate of M1 switching it off.

The only down side to this circuit when working with an Arduino is you need to hold the power button in long enough for the bootloader to finish executing (about 2 seconds) before the power will stay on. It can be beneficial to add an LED (and associated current limiting resistor) to the GPIO that drives the gate of M2 so you get a visual feedback of "power on" (or you could use a separate GPIO if you so wished) so you know when you have held the button long enough.

A high side pnp transistor or p-channel mosfet with a pull up resistor on its base/gate between the 5V regulator and your accessory circuit. When your arduino goes to sleep, set the control pin high or input mode to turn off the transistor. When you need the power, pull the pin low.

A relay is too big and will drain your 9V battery real quick.

Not the answer you're looking for? Browse other questions tagged arduino mosfet relay or ask your own question.

4
Microcontroller soft off circuit not working - why?
3
Momentary switch power: press to turn on, microcontroller can turn itself off
2
Detect self power off (and delay power off)

3
How to go about turning on/off a coffee machine with an Arduino?
1
How to keep the signals at the pins on a Arduino upon software restart
0
Turn off device when USB power is present
0
Mosfet array as power switches
0
Arduino power mysteriously stays on
0
latched circuit that reverts off when power off
2
Arduino complete self shutdown
0
Prevent MOSFET input being low when connected to output of powered off device
0
USB data and Power cable with Switch to power Arduino. Is it a safe design?
0
Latching relay but self resetting (to off) on power off?