I am trying to sample a LED light driver signal which is DC signal with an approximate mean voltage of just over 50V and a 3V pk-pk ripple. I would like to sample the signal with a microcontroller which has a maximum 5V input on it's ADC.

I tried building a simple potential divider circuit with 1M and 100K resistors, and then opened up the lamp and connected my potential divider in parallel with the LEDs being driven in the lamp (there appear to be 9). This did the trick for lowering the voltage, however it completely changed the shape of the signal. I'm assuming this occurred because I'm changing the load on the driver?

Here's some images of my signal before and after the potential divider. The stepped down voltage not only changes shape, but also becomes slightly unstable. The peak to peak voltage of the wave fluctuates ocassionally getting bigger, as well as the signals frequency which decreases (so the wave spreads out and gets bigger). 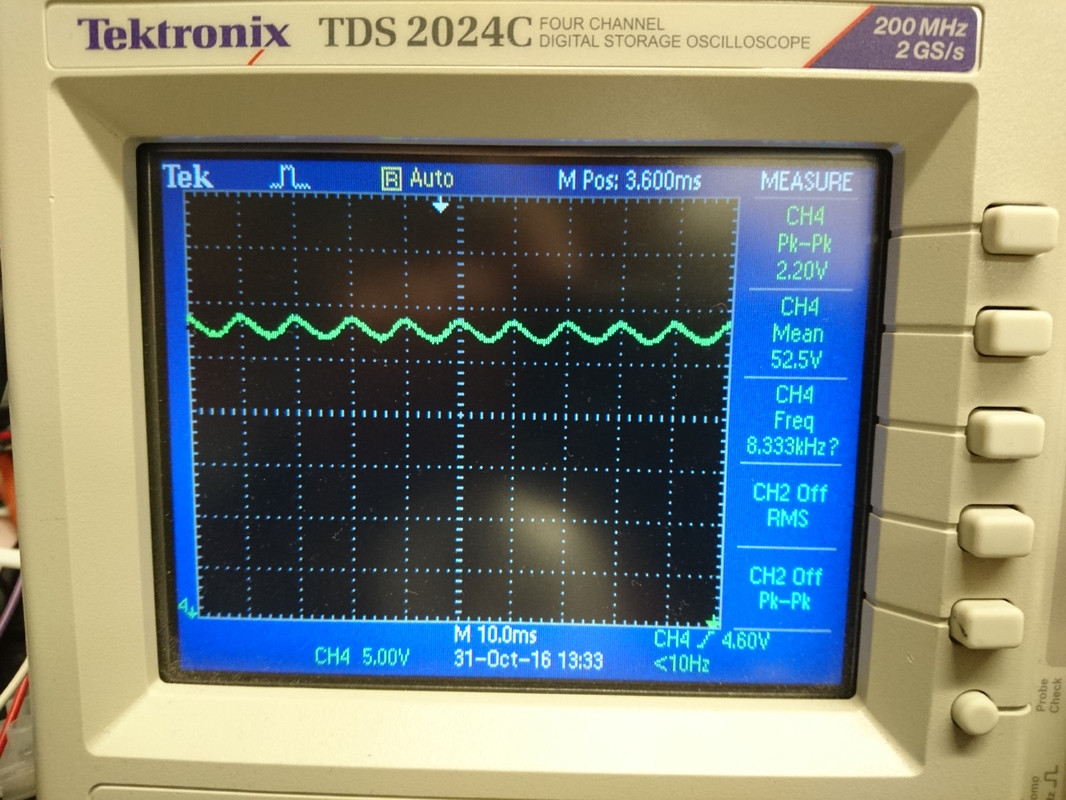 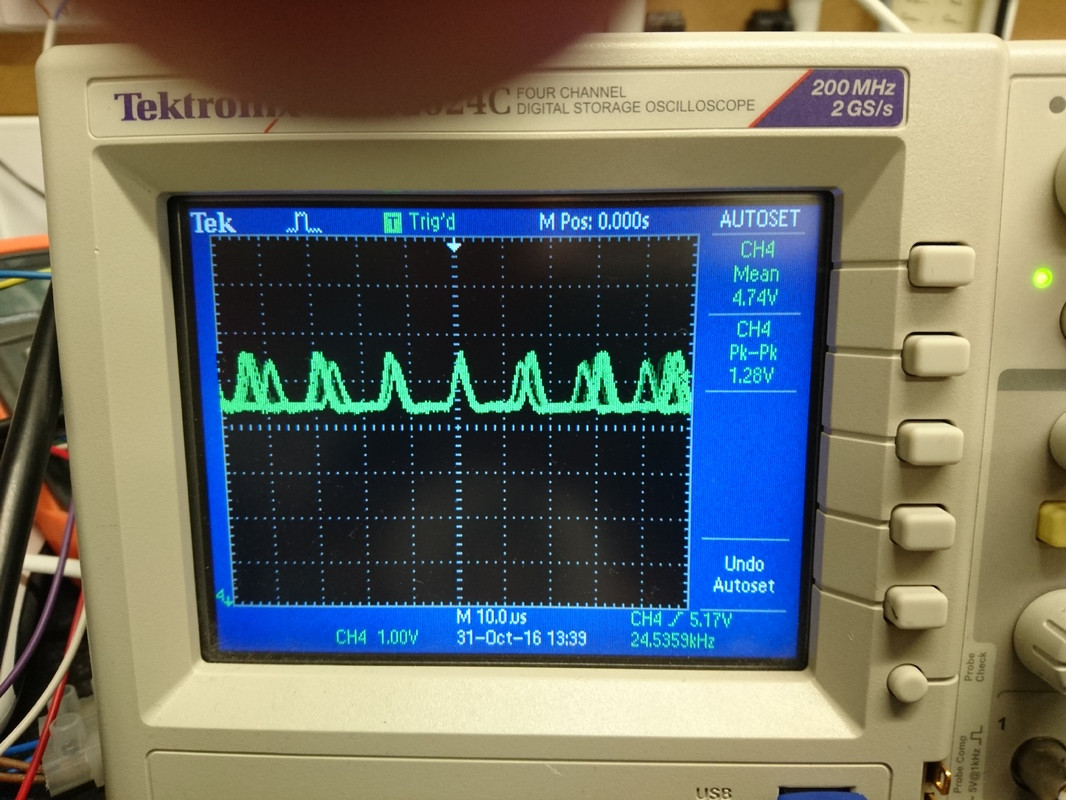 Does anyone have any advice as to how do I should go about stepping this voltage down, while still preserving the original signal shape? Thank you.

Edit: So this is my schematic. 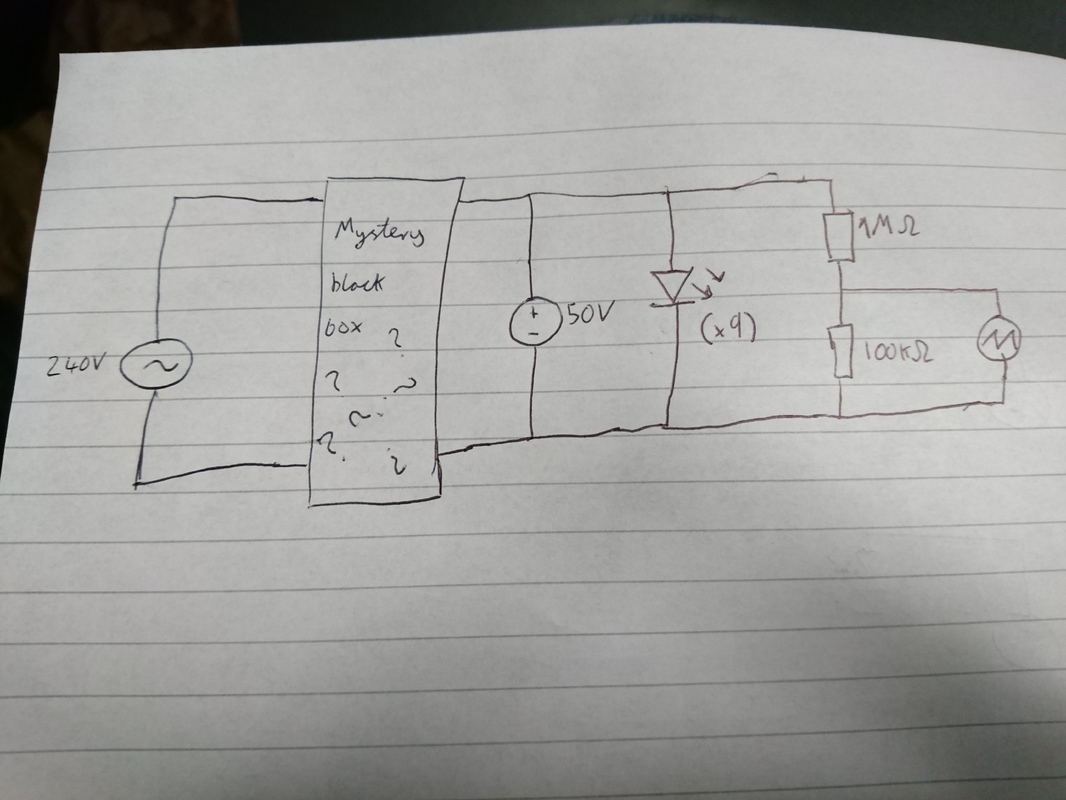 The LED lamp is a normal lamp for domestic use, which is powered of 240V AC mains. The black box is the driver circuity connected to 9 LEDS in series. I didn't design this, the friendly lamp makers did. (As I can't post more than 2 links per post with a reputation below 10, I have had to include the pictures as I have below, if you copy and past it into your URL bar it should work however)

FakeMoustache, the scope itself does not have a ground connection and is connected to mains via an isolating transformer so that the ground is floating. I don't entirely know what you mean by "switched from the positive side". They're all in series connected positive to negative though :). 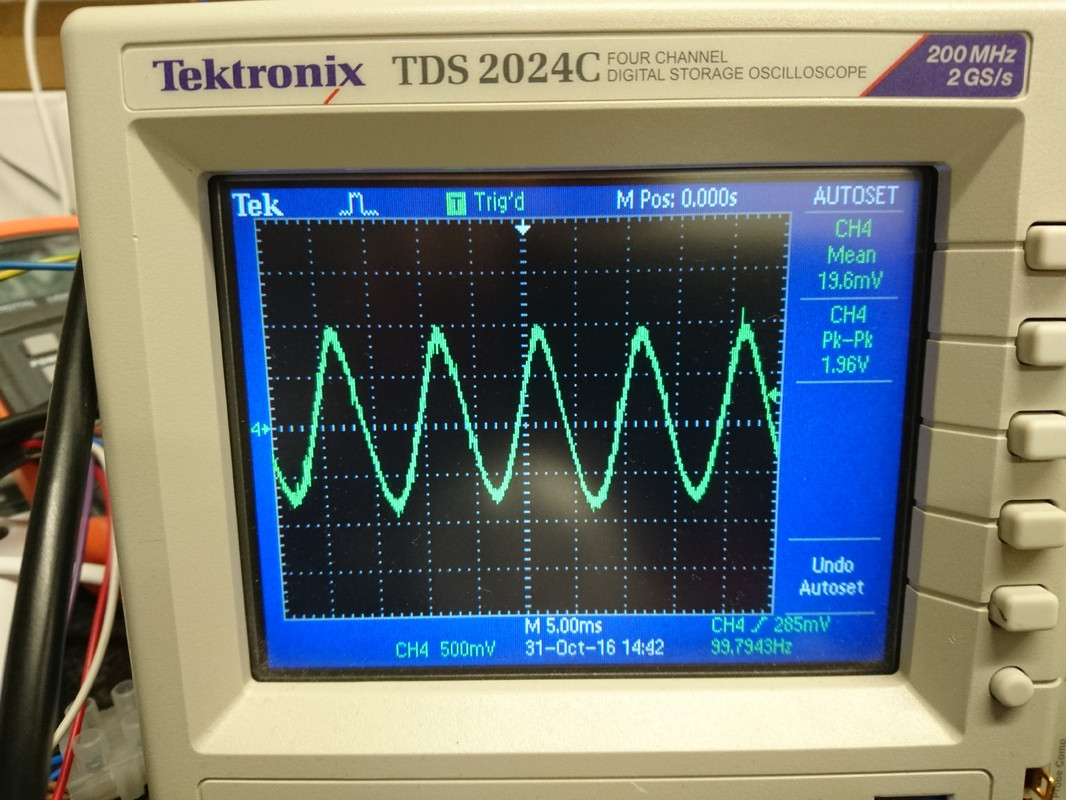 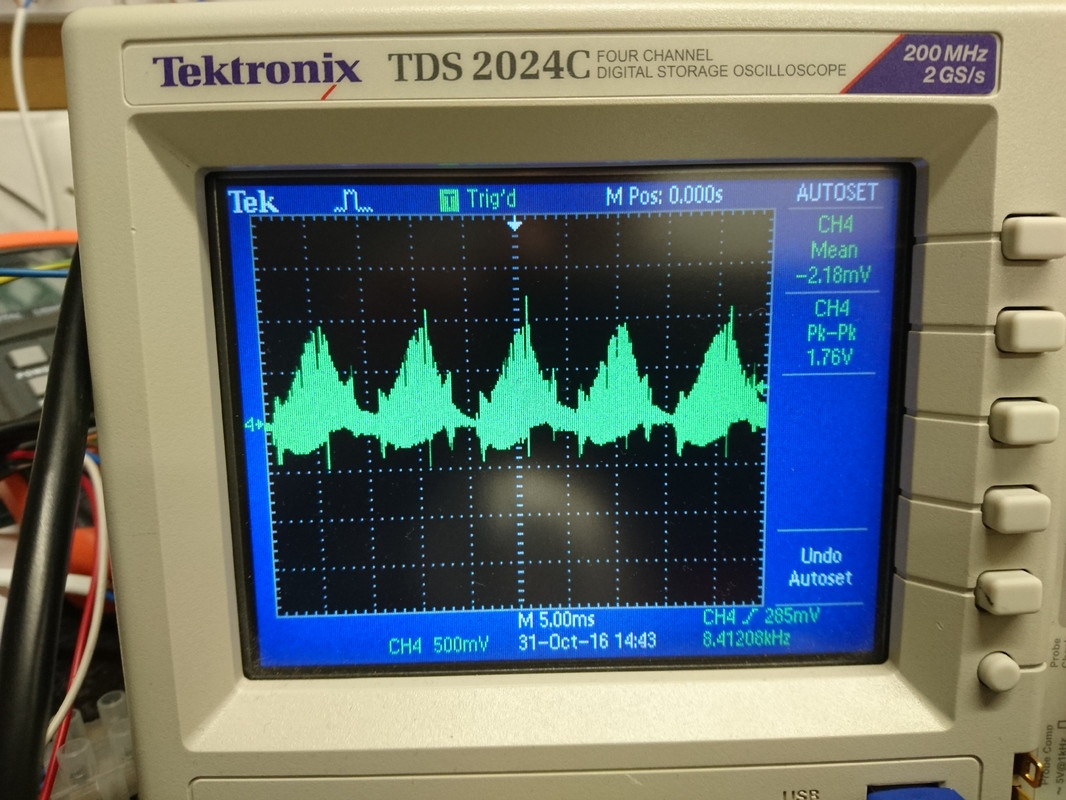 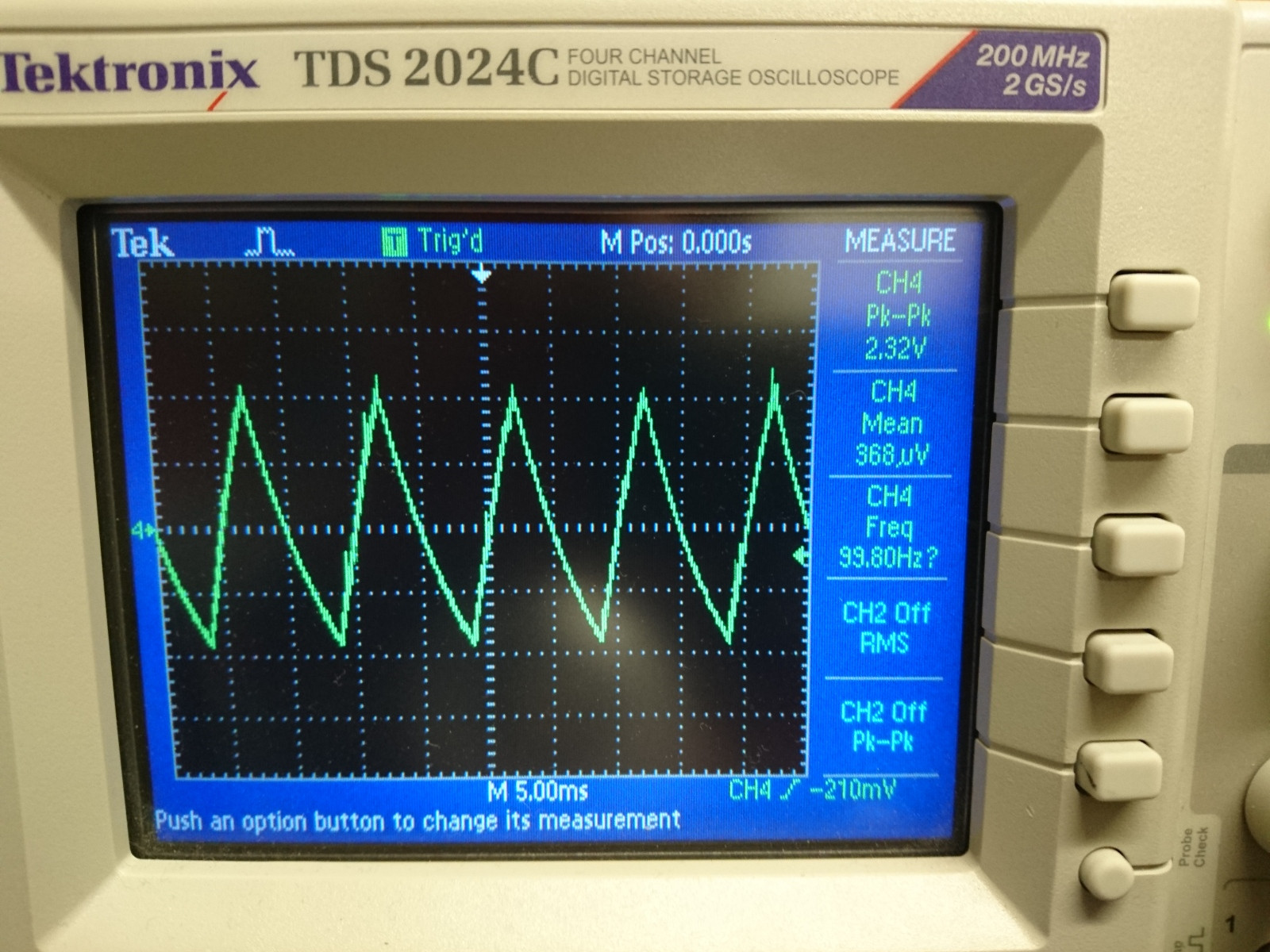 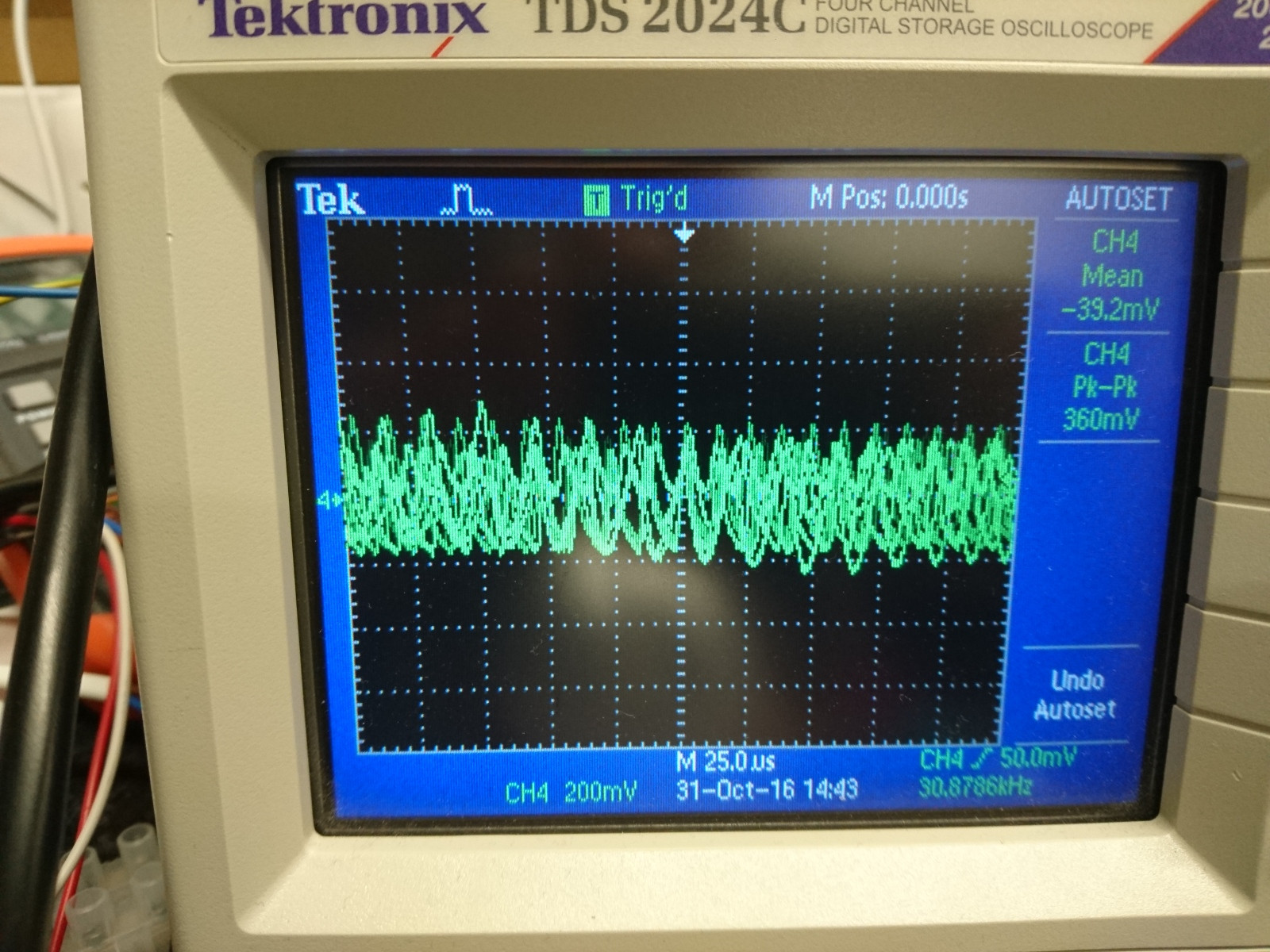 I will be sampling at 1Khz, but I have yet to actually try it, will do that today and plot the graph to see how it compares to what I'm getting out my scope.

Stray capacitance is a possibility as I'm using a couple of roughly 1.5-2m wires to connect the lamp to my potential divider. But wouldn't that affect the signal across the whole divider as well as from the middle?

You need to buffer the signal before dividing it down. Op-amps are the usual way of doing that. Depending on the precision you need, an instrumentation op-amp costs a little more but has a lower offset voltage and tends to be the most linear over range.

The usual configuration is to connect the signal to the positive input of an op-amp, perhaps with a high value resistor for protection. The input of the op-amp is very high impedance. The output is then divided with resistors, and optionally fed into another op-amp buffer to avoid problems stemming from the impedance of the ADC.

The following schematic demonstrates a divide by 2: 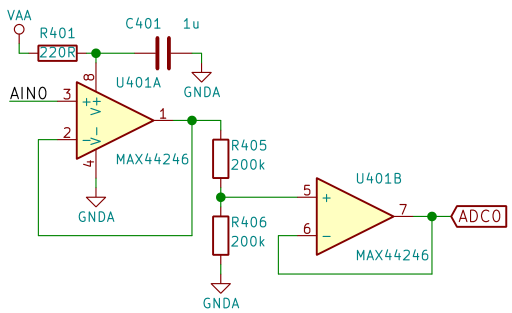 You should compensate the oscilloscope 10x probe first. Looks overcompensated to me.

The led might have a open drain driver something like that, the falling edge being the floating one that changes to driven low when you put the divider.

That's why the shape looks different with and without the divider.

A common driver like this will leave the negative side of the LED floating between inductor discharge and transistor open. 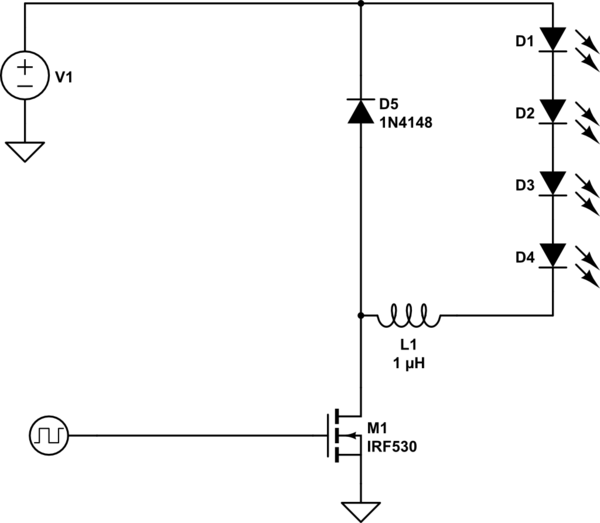 The jitter you see with the 10X probe is due the HF noise amplified by overcompensated probe disturbing the trigger.

100K impedance is not so low to be unsensitive to tapping.

Not the answer you're looking for? Browse other questions tagged microcontroller adc high-voltage or ask your own question.